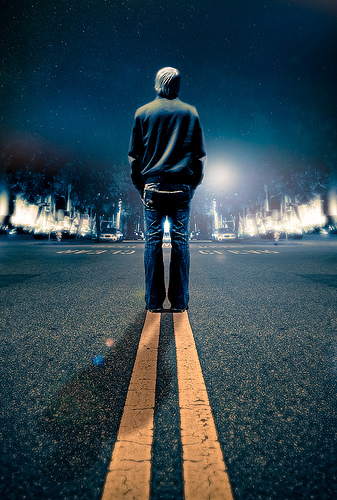 It’s been a rough week. I’ve been an emotional mess, and have felt more vulnerable than I have in months. I don’t really know what brought it on either. I kept looking at the calendar, trying to find some reason, or meaning, behind all the tears I have been shedding this week, but just came up empty handed.

Perhaps that’s just it, I feel empty handed. What have I really gained from all of this? This grief journey is so much work, and it’s times like this I often wonder if what I have gained is worth my effort. Is it worth my loss? Of course not. Yet, I have no choice but to keep working on it.

For some reason it’s been this week that my new coworkers have been stopping to visit in my new office, and asking about the faces in the picture frame that sits on my desk. My response is always the same, and always in counter clockwise order.

This is my daughter, Arianne, my oldest son, Dante, my youngest Remy, (deep breath) and this is my late husband Michael (another deep breath.)

People have been responding quite nicely, taking the moment to offer their condolences. I’ve been using the short drive between my office, and my son’s school, to get a good cry in. Actually, there are times that I take a private moment to cry out whatever I have been holding back during the day, but this week they arrive unplanned, and often without my control. I know that we cannot be expected to hide, or hold back our grief all the time, but the reality of my job is that I can’t be emoting while conducting mediation’s.

I made a really good friend in my short tenure at my last job. She is quite adept at sensing my needs, even when she hasn’t seen me in awhile. It’s almost scary. This week she sent me text messages most nights, just checking in, and letting me know she was there. One night, late in the week, I had fallen deep into despair, and temporarily lost my ability to reach out to the hand that was offered. When I saw her last night at a friends party, the first thing she asked if I was okay, because she didn’t hear back from me. Before I could answer she notice the urn locket was back around my neck.

I let her in on how my week had progressed, and let her know how much I appreciated her reaching out to me. In many ways her evening text messages kept things from getting worse than they could have. This conversation was shared amidst a large group of friends who had gathered at a local restaurant for dinner and drinks. With the festive energy of the group, and a couple of margaritas, I was soon able to let go of my grief, and really have a good time. As our time at the restaurant was coming to the end, the group decided that everyone should meet at a local club and go dancing. Right away everyone started encouraging me to join them, yet most probably not expecting that I would say yes. I let them know I needed to go home to check on my son and his friend that was over, and would decide at that point. Once home it would have been really easy to just crawl into bed for the night, as it was getting late, but I decided I would push myself further. I’m so glad that I did.

I ended up dancing the night away with each of the lovely ladies in our group. At one point I was dancing with my close friend, and she asked when the last time I had been out dancing was. I couldn’t even remember.

It’s been a very long time, is all I could say.

Later as I walked my friend and her sister to their car, she let me know how happy she was that I decided to join them. She said that all she could think about was how so many in our group have been dealing with some significant loss, and that it gave her so much joy to see each of us out there laughing, dancing, and having a good time. Those thoughts had also been swirling around in my head as well. At one point I was there dancing next to some new friends of mine who lost their toddler just a few months earlier. There we were, still with that recognizable look of loss in our eyes, yet smiling, moving, and having a good time.

This really has me thinking. We often say that there is a lot of work to be done on this grief journey. I suppose that if we want our work to be as productive as possible, then we need to be sure to take some needed breaks now and then. All work, and no pleasure, can only lead to burn out, which is where I likely found myself this week.