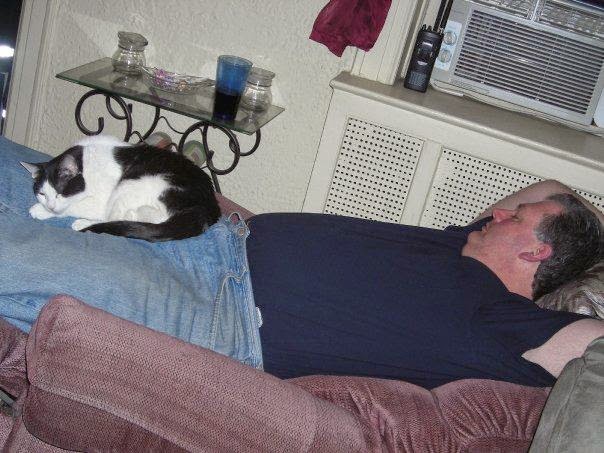 My husband was a huge animal lover, and even more cool, animals absolutely loved him. They flocked to him. We would go over to other people’s houses or just walk to a nearby park, and other people’s pets would run up to him and want to play. If we went to anyone’s home who had a dog, he was instantly playing with the dog. He always wanted a dog of his own, but because we lived in an apartment that didn’t allow dogs, he used to say: “Someday, Boo. When we move to a bigger place or maybe buy a house or condo, I can have my husky/shepherd mix.” Well, that never happened.

What did happen was that Don Shepherd packed up his entire life into a moving van in February of 2005, and, with his cat Isabelle in his lap the whole time, drove from Florida to New Jersey non-stop, to start a life with me. His cat Izzy was 13 at that time, and two years later, she got old and sick and we had to let her go. Don wanted to adopt another cat or kitten from the local rescue shelter, so we went there together and found two sisters that were only about 7 weeks old. They told us the sisters were a package deal, and so Don convinced me that we should take them. I was very hesitant about having two cats. I kept saying: “But I don’t wanna be the crazy cat lady.” He would say: “You’d need at least 3 cats to qualify as crazy cat lady, and crazy cat ladies usually don’t have husbands. They just have cats.”

Cue the part of the story where my husband randomly drops dead.

But before that happened, we took the 2 kitties home and named them Ginger and Autumn. They were so damn cute, running around and chasing each other, and fighting playfully and lying down at night behind our heads. Ginger was so in love with Don, she literally would hang on him like he was a tree. She would sit on his shoulder or wrap herself around his neck and just hang out wagging her little tail. One day, when they were about 3 years old, Ginger and Autumn were playing and chasing each other like usual. It was the middle of the night, like 2 am. Suddenly, Ginger whimpered loudly and limped under the bed, hiding and whimpering. “Come here, sweetie. We have to see what’s wrong honey. It’s okay, my sweet girl. We’re gonna get you some help.” My paramedic husband went into action while I panicked. “Get the kitty cage, Boo. Look up where the closest vet ER is. Something’s very wrong. ” We drove Ginger to the nearest vet ER, which was a good 40 minutes away, and she moaned the whole time as I tried to calm her while Don drove and talked to her the whole time. When we got there, they took her and we waited. Then a guy in a white coat came back out and took us into a small private room, closing the door. He pulled out an x-ray and showed it to us, and Don burst into tears. “Look, Boo” he explained to me, since I had no clue what was happening. “Her poor little lungs can’t breathe because her heart is too big. Her lungs are being crushed. Oh, my poor sweet girl.” The doctor explained that Ginger had been born with an enlarged heart, and that she threw a blood clot, causing her to spasm and stop walking on her back legs. He said it would happen again and again, and that she was not destined to live a long life. We had to let her go, and Don and I held each other and cried in that private room for a good half hour before Ginger came back in so we could be with her when we let her go.

Just 3 days later, when it was just us and Autumn, who seemed quite depressed at the loss of her sister which she didnt understand, Don wanted to take some pictures of Ginger back to the rescue shelter where we got her, and where her foster mom worked. He wanted to tell them what had happened. I agreed, although I really wasnt much in the mood to go back there, but we did. We walked inside, and began telling them what had happened, when suddenly, this full grown adult orange male cat, lept out of his cage and ran across the large room, galloping like a horse. He sped through the 12 or so other people in the room, and ran right up to Don. He looked into my husband’s eyes, then climbed his 6 foot 4 body, all the way up to his shoulders, just like Ginger used to do. Then he sat there, staring at Don and wagging his tail. Don turned to me with tears in his eyes and said: “You realize we are taking him home, right?” 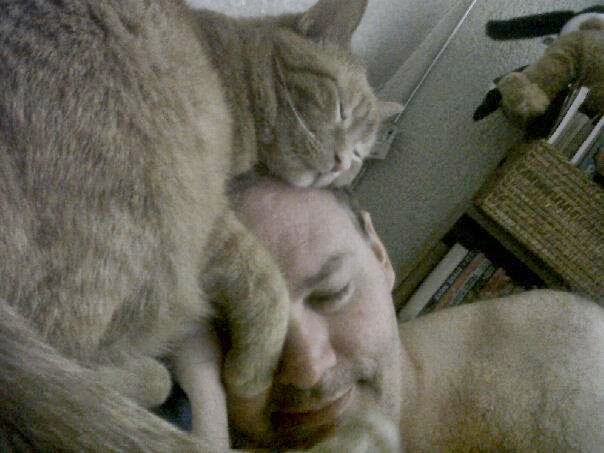 So there we were, coming home with this 9 year old boy-cat, whose name on his papers was simply “Shawn.” We both couldn’t stop laughing at that stupid name. “Shawn? Who names a cat Shawn?, Don said on the drive home. “That sounds like the name of some Irish dude from Boston that you’d go and meet for a beer. It’s silly. No. He will be Sampson. Sammy.” And so it was. Sammy came home, and he healed Don’s grieving heart from the loss of Ginger. He followed Don around everywhere. He slept ON his head, almost every night. Sammy could not get close enough to Don. It was like he wanted to sleep inside of his face. That was in 2010. And then, in July of 2011, I found myself running into an E.R. at morph speed one early morning, as I saw a gaggle of nurses and doctors walk toward me. And it was me who went into that small, private room where they closed the door and told me that my husband had a massive heart-attack and didn’t make it. It was me who went home alone that night, and forever.

And so now I’m the crazy cat lady. Even though I only have 2 cats, I still say I qualify for the role. I certainly feel crazy most days. I have no idea what I’m doing, Don was the better pet-parent by miles and miles, and they miss him in very specific and obvious ways. Too much to get into here, as it would take pages to explain the many ways in which they grieve for their Papa. But here we are – me and Autumn and Sammy. We have moved twice together, in the 3 years since Don’s death. It was very difficult, both times, to find living situations that would accept not one, but two cats along with myself. I kept hearing Don’s voice in my head, from when he and I were thinking about moving years ago: “I’d live underneath a bridge somewhere before I’d ever let anyone take my kitties away from me.” So where I go, they go. I do my best, and I love them like mad. They are the only living piece of Don that I have. We never got to have our family – we never got to have kids together – so this is it. When it’s time to say goodbye to them, I don’t know how I’m going to do it. Sammy is already almost 14 now, and showing signs of slow cause for concern. I just pet him and love on him and say “I love you, buddy. I love you so much. Papa loves you too.” Autumn sits in the hallway and meows and howls at the ceiling, sometimes for an hour straight. She did the same thing after Ginger died. Don used to say to her: “Are you talking to your sister, honey? Tell her Papa loves her.” So now I say: “Are you talking to Boo? Tell him I love him so much.” I don’t know if I actually even believe anything I’m saying in those moments that I’m saying them. I don’t know that I believe Don can hear me or that he knows what we are doing or any of that. I don’t know. But it’s all I’ve got, and so I do it. 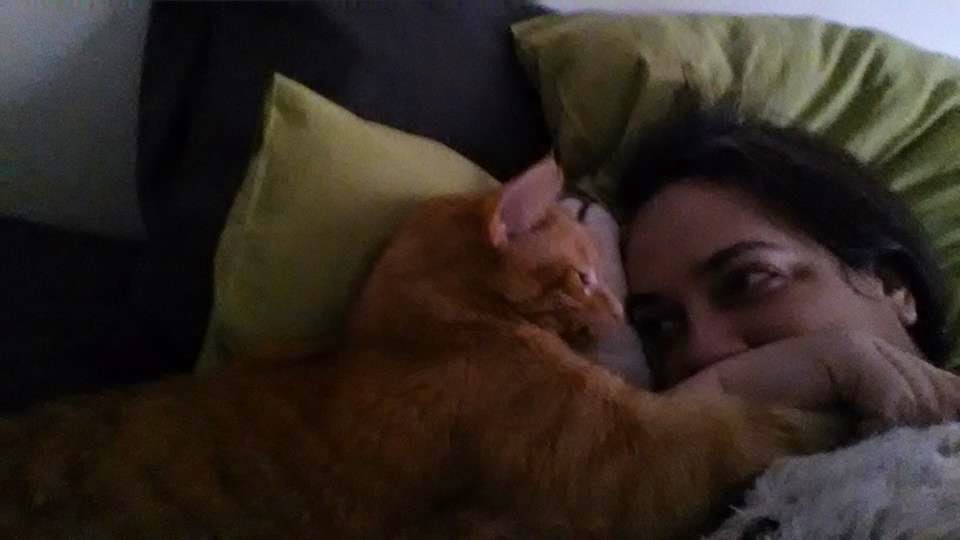