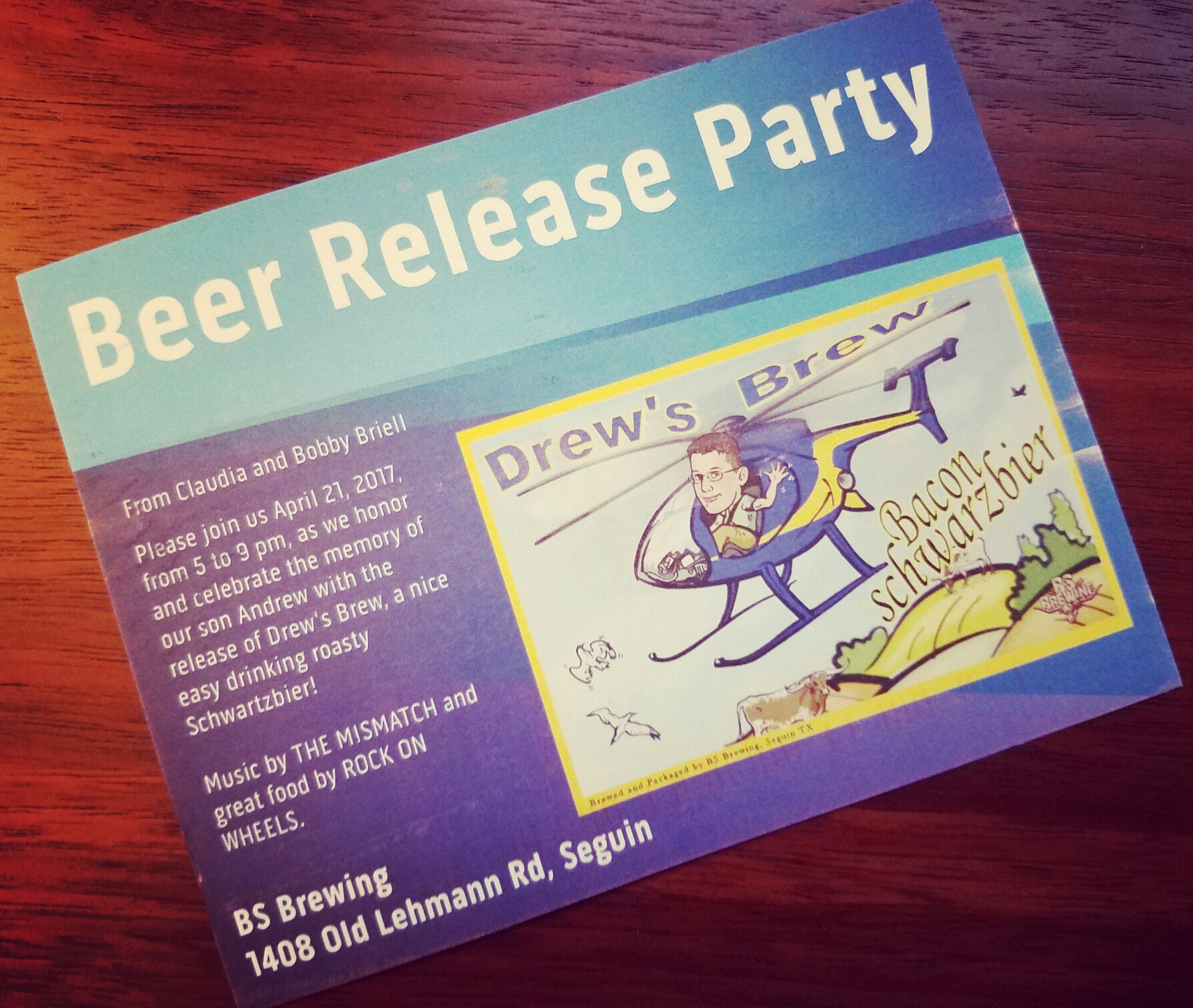 In honor of Sarah’s late-fiance’s birthday, I’ve decided to write him a letter, man to man.  It’s something I haven’t done in awhile, and today, of all days, seems most appropriate.

So, today’s your birthday.  It’s kinda hard to believe you would have been only 33 years old.  You had way too much left to do.  Hell, you were just getting started.

Anyway, enough with all the “far too young” and “taken too early” crap.  You know as well as I do it’s all cliches and fluff that people spout off when they don’t know anything else to say.  Point is, you got to experience some pretty damned cool things in your life, and with a damned good woman by your side for the last few years of it.  That’s more than a hell of a lot of people can ask for.

Dude…you’re having a beer made in your honor, with your name!  A goddamned BEER!  BACON beer!.  In a few weeks, we’ll be sipping it (your friends, family, and I) and toasting you in your hometown.  Let me be frank…that wouldn’t have happened if you hadn’t died man.  There would be no bacon beer in my life.  It would be a cold, dark, bacon-beerless world.  It had better be good, but I don’t know how it couldn’t be.

That’s the thing too.  Unless you’re some multi-billionaire philanthropist, donating to the new underwater basket weaving academy in Des Moines, you don’t get things named after you unless you go out in a blaze of glory.  I like to think that as your helicopter hit those power lines, you were thinking “Well, at least I’m going to get a beer named after me”

And hey, Shelby, Sarah and I got to have cake for breakfast this morning for your birthday.  Can’t beat that.  Megan would have been the first lining up to celebrate it if it meant cake for breakfast…Shelby did a pretty good job of bouncing off of the walls at the mere thought of it.

So let’s see.  You got to fly helicopters.  You had friends that loved you so much that they still have a yearly gathering to celebrate you.  You landed Sarah.  You now get a beer named after you, and brewed just because of you, and you didn’t even make it to age 30.  Screw “you were far too young”…I’m gonna say “you had a damned good run that should be remembered”.

So, keep on flying bud.  Ferry Megan around wherever she wants to go (eh, I’m sure she’s following her brother’s impending marriage and child pretty damned closely right now…have fun witnessing the miracle of childbirth, and all of the gooey purple goodness that people call “beautiful”).  Try to steal away for a few days in Mid April, where we’ll be sitting at your graveside, sipping a beer in what’s bound to be 90+ degree Texas “spring”.  I’ve got Sarah, and I won’t let any harm come to her, so you don’t have to worry on that front.

I can only hope that my legacy is worth honoring as much as yours.  That those that surround me now remember me with alcohol and confections, and not bad moods and tears.  That I can say, as I ascend to wherever it is I’m going, that I really got to accomplish something I had dreamed of doing.

The next fish I catch will remind me that I didn’t get to drop a line with you, but I won’t mourn you, because I can’t, and frankly, I didn’t know you personally.  I get stories, mainly from Sarah, that tells me we’d have been fast friends.  So yeah, that part kinda sucks and all, but again, cake and beer.  I’m so conflicted.  Should I be all somber and sad on a guy’s birthday, just because he’s not here, and I never got to meet him?  Nah…cake and beer.