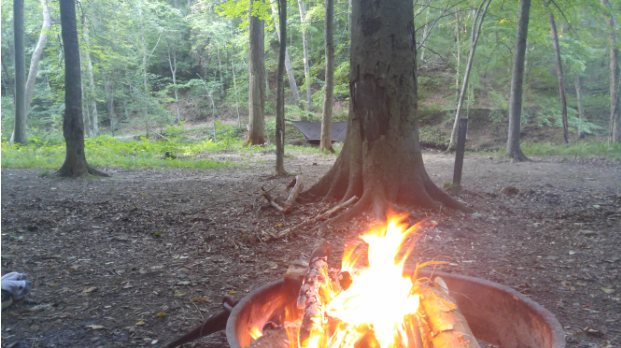 Prior to losing Megan, I was an avid backpacker.  5 or 6 times a year, I would meticulously plan a trip to the mountains over a weekend, and disappear for a few days.  No cell phone service, no emails, no TV, no distractions.  I am at my most calm and reflective while I am in nature.

It was a way to recharge my batteries and spend time in a primitive space.

It’s been two years since I last spent a night in the woods.  Megan’s organ rejection, and her subsequent hospitalization put a complete stop to any outdoor pursuits.  My gear sat, collecting dust until a week ago, when I finally felt ready to leave the world behind and disappear again.

I can’t say that, to me, this moment was any less significant than our first Christmas without her, her birthday, or even  meeting and dating Sarah.  It felt important to be putting a boot on the ground again, for the first time knowing that I wouldn’t be returning home after a long weekend to Megan.  The thought did not escape me that it also meant that the guilt I usually felt, that of leaving a disabled wife with a young daughter, was no longer present either.  I was unencumbered…truly “free” for the first time in over 12 years.

That freedom is important.  I had always taken my trips around Megan’s various hospital stays, procedures, and during “healthy” times.  When I was discharged from the Marine Corps, I didn’t have a regular experience for a 22 year old.  Megan and I met three months after my discharge, and she went in for a two week hospital stay the next day.  Our twenties were spent months at a time, depending on whether she was admitted to the hospital or not.

With that said, last weekend I dropped Shelby off at my parents, sent a “bye for now” text to Sarah, and stepped off into the woods.

The hike wasn’t very strenuous; maybe ¾ of a mile or so.  Rosie (my dog) and I ambled along through the oaks and maples, met a few horses going the other way, waded through a creek a couple of times, and arrived at our campsite by around 1:00 PM or so.  This wasn’t a long distance hike along the Appalachian Trail, or a leg burner up the side of a 10,000 foot mountain in Yosemite.  It was simply a walk in the woods, at a relaxed pace, an hour from my home.

In the woods, regardless of location, time slows.  Arriving at 1:00 gave me at least 7 glorious hours of daylight, alone, with only my thoughts and memories and a campfire to occupy me.  The camp chores, such as gathering firewood, hanging my hammock from a couple of trees by the creek, and securing drinking water have become so routine that they require little to no thought.  It is muscle-memory at this point. 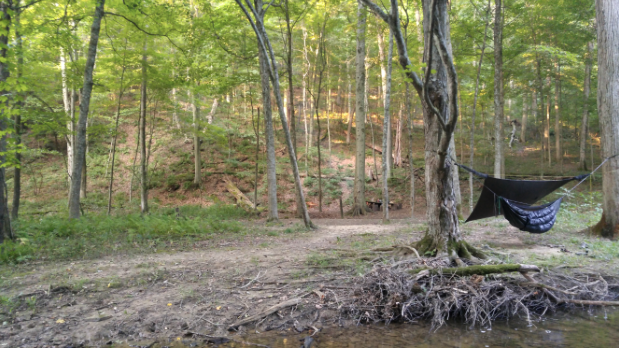 Once I got set up,  I did nothing but sit.  I watched leaves slowly tilt back and forth in the breeze, listened to the creek tumbling over the sandstone, and even stared at an ant transporting some unknown crumb of food from a previous camper back to wherever his nest was.  It is truly a meditative space for me.  One reason that I hadn’t gone back out since Megan’s death is because I didn’t know how I would react when I got to this point, the sitting.  I feared that I may have a severe anxiety attack, my mind racing me towards insanity.  There was a (completely valid) worry that I would have a nervous breakdown, and not have the ability to call anyone for help.  I am a meticulous planner, and with that, planning for the contingency of my impending trip to crazy town was overwhelming to the point that I just didn’t want to go.

What actually happened, is that after sitting a while, contemplating life, and making myself some food, I took my dog over to the creek, and we played.  I felt like a 10 year old again.  I skipped rocks, caught crayfish, built little pools and dams and waterfalls, and explored.  I splashed Rosie and made her run around like a maniac.  Afterwards, I built the fire, and sat and played with the ends of sticks in it…lighting them on fire, blowing them out, and just watching the wisp of smoke roll off of the tip.  I did this until well into the evening, always waving at the few humans that passed by on horseback or foot, but going right back to flipping over rocks or playing with the dog.  I must have been a sight.  A bearded, lightly tattooed, shirtless 34 year old man, with a knife on his hip, playing in a creek in the woods.

Once night fell, I sat beside the fire with the dog, and wrote in my journal.  The great horned owls quieted down (there were two of them, calling back and forth), and I thought about Megan a ton.  More than I’ve thought about her in months.  There was not even a hint of sadness or anxiety.  This is not to say I didn’t and don’t miss her, quite the contrary, but I had happy memories of her, and a sense of relief that she, and I, no longer had to worry about these 24 hour periods where I was unavailable, lest she cough up a blood clot or collapse a lung.  That’s the thing with a life-long illness: the routine of life becomes nothing more than a series of calculated risks.

For the first time, I didn’t have the unwavering guilt that always came with disappearing.  No matter how many times she told me she wanted me to go, I always had guilt.  She wanted me to enjoy some time in nature just as much as she wanted to enjoy some time with Shelby.  I always wanted her to go with me, even though it was not physically possible for her to be there, save for one or two miserable, cold rainy nights where she tagged along.  Backpacking was “my thing”, and she was happy to see me off so she could spend some girl time with Shelby.  It still didn’t suppress my worry that I would come home to an empty house, because she was carted off in an ambulance again.

This time however, I didn’t have to worry about it.  I was free to finally focus on not focusing.

I think maybe, she was finally out there with me, enjoying it all, and maybe, just maybe, she was experiencing a childhood with me that she never would have gotten in life. 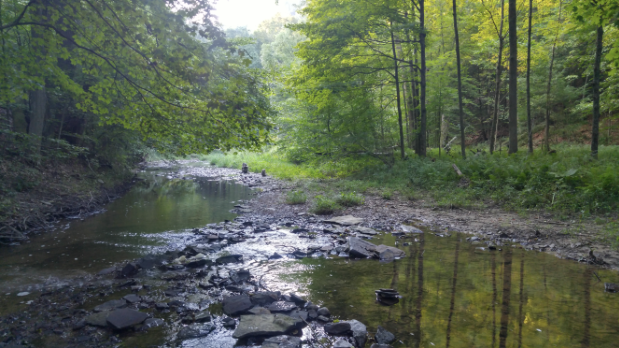