I celebrated Thanksgiving with Robyn and her brood, but assured Lee’s brother, Paul, that I would be celebrating Christmas with him and his family.  Neither Robyn nor I celebrate Christmas as a matter of faith, but it’s an important holiday for Paul just as it was an important holiday for Lee.  Sharing this holiday with her family helps maintain the personal bonds, which have tightened since she died. I know this is good for me and I think it is good for them, too, especially at this time of year when our losses can sometimes feel acute.

This year I was especially looking forward to seeing Paul’s son, Joe, and Joe’s wife, Katie, whose father very recently died shockingly fast from pancreatic cancer, the same villain that took Lee.  I also was looking forward to seeing their daughter, Allie, because, just as I always knew that Joe had been Lee’s favorite nephew (though Lee never would have admitted this fact), I knew that, among Lee’s great nieces and nephews, Allie was her favorite. By default, this means Joe and Allie are my favorites, too.

I always have enjoyed giving gifts more than receiving gifts, so it was a pleasant distraction to do a bit of shopping in advance of the Christmas celebration.  Each of the four kids received two books, each title carefully chosen with help from my local bookseller. (I also gave a similar gift to my nephew’s kids, though, sadly, I have less of a relationship with them.) While these books cost more than I would have spent online using a service like Amazon, I felt good that I was able to keep my business both local and small. Neighborhood booksellers deserve to prosper, too, and not just during the gift giving season.  My local bookstore, which had to close its doors following the worst days of the covid pandemic, might never have reopened the space, except it turned out that quite a few people in my neighborhood, including me, demanded it.

As for the parents, I bought each set one unusual Christmas ornament through the MOMA. This was not an inspired decision, but, simply, a tribute to Lee, who had collected unusual or special ornaments during her lifetime. I remember that each year, Lee would carry all the boxes of ornaments upstairs from the basement. She would take her time rummaging through them, selecting ornaments to be displayed in our home that year.  After the holidays, she was meticulous about repackaging each ornament for the next year.

I had distributed her collection to members of her family and to our close friends at the first Christmas following Lee’s death. At the time, it had brought happy tears to my eyes. Today, thinking about the collection brings a sad tear.

Christmas, birthdays, other special occasions: it doesn’t matter. I am a terrible gift-wrapper.  As a teenager I had a part-time job in a large downtown department store that provided a free wrapping service to its customers. During my time there, I came to marvel at the skill and imagination of the women who were assigned to work the wrapping booth and became convinced there was no oddly shaped object that they could not tame. Alas. Arts and crafts were never my strong suit.

To be honest, throughout my life I have dreaded the task of wrapping gifts. I find it to be an unpleasant chore. Fortunately, Robyn happily came to my rescue this year, even generously sharing her own to-from labels with me, as, almost needless to say, I had not bothered to obtain any. Ditto for not having a bag full of ribbons, even one ball of string, or bows, or any other gift-wrapping accoutrements, save some Scotch tape.

A celebration on Christmas had been planned for this past Saturday.  After I informed Robyn that I would not be free to enjoy our usual Saturday date night festivities, we had agreed to have dinner this past Thursday. However, I miscalculated, failing to take account that plans with Lee’s family are seldom fixed. And, predictably, I’m afraid, as the 11th hour approached I heard from Paul that the Christmas celebration was being moved up from Saturday to Thursday to accommodate Joe, who apparently had now decided to return home to Michigan before Christmas day.

I duly notified Robyn, who understood. I tried to put the best face on things by reminding her this change in plans also meant I was now free Saturday for date night! Of course, she had already made other plans for Saturday based on her reasonable assumption that I was not free Saturday.

Thursday dinner was splendid, consisting of tangy barbecue and smoked chickens, fluffy twice baked potatoes with a perfect, crispy, and brown crust, and buttery Brussel sprouts for a touch of something green. There was a homemade mac and cheese dish for the kids. However, by the end of dinner, a large and nearly empty Pyrex baking dish on a trivet was testament to the fact that we adults had enjoyed eating the kids’ food as much, if not more, than the kids themselves.

After dinner, Lee’s nieces entertained at the piano with loud and heartfelt renditions of their favorite holiday songs. I knew Allie could sing because she is a born diva whose parents are professional musicians, but her cousin’s piano accompaniment was both surprising and impressive. Joe and his mom, Joanne, herself a former professional singer, were moved to contribute sweet harmonies.

Gifts were duly exchanged and ripped open.  Before departing, I presented one last gift: a tattered picture album with a cloth cover containing various photos of Lee’s family members, including her parents, grandparents, and two brothers. In most of the photos, the subjects appear relatively young. There is one photo of Lee’s parents on Bourbon Street in New Orleans, enjoying a quickie, wartime honeymoon before Lee’s dad would have to report back to the barracks.  I recall Lee telling me this was the first time her mom had ever stepped outside her small hometown. In a photo portrait of Dave, Lee’s older brother, he is still a young man, standing tall and ramrod straight as a newly minted state trooper in his uniform.  A snapshot taken with an Instamatic shows Paul and Joanne broadly smiling, “just married,” but still looking like a couple of kids. Lee herself only appears in the backgrounds of one or two of these old pictures, the impossibly tiny toddler, carefree, frozen in time in a happy space. In contrast, in several black and white photos, her grandparents strike stern poses like the subjects of Grant Wood’s American Gothic, despite appearing too young to act so dowdy.

While Paul was pouring over the photographs and sharing some of the memories that they triggered with his own children and grandchildren, possibly for the first time, I slipped away unnoticed. I left thinking, all in all, quite a festive occasion.

That is, until the next day when I received an apologetic text from our host, explaining that he had started feeling congested Thursday afternoon and that his condition had intensified over the course of last night’s gathering. He knew at the time he ought to have removed himself from the festivities, or, at minimum, said something to the adult attendees, admitting only now that he did neither. Then today, upon awakening, he had a raw and sore throat that could not be ignored. Belatedly, he would get a covid test.

At first, I was too shocked by this disclosure to feel angry. After all, being 70 years’ old, I am by definition “at risk.” And others present were even older than me. Fortunately, when I told Robyn what had occurred and that I might be required to isolate, she had reacted with enough anger for two people. (Since then, however, Robyn has adopted a more sanguine attitude.) Later that same day, the host sent a terse follow-up text message, confirming that he was infected with covid.

Based on this update, Robyn and I abandoned our plans for Friday. And while she had managed to rearrange things so that we could also have been together Saturday, it simply was not to be.

Lola the pup and I accordingly made plans to hunker down for the duration, according to CDC guidance at the time for a fully vaccinated, asymptomatic individual, but not before managing to score a couple of the last remaining rapid covid test kits to be found on store shelves anywhere. Then, this past Tuesday, at the first sign of a sniffle, I cracked open one of the test kits.  Not surprisingly, I tested positive for covid. 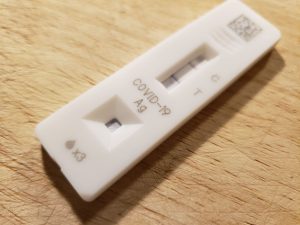 This coming Friday was supposed to mark my first New Year’s Eve celebration together with Robyn. And I must add that I was also looking forward to leisurely recuperating with her on New Year’s Day in a special, daytime version of Saturday “date night.” Now, despite the most recent CDC advice shortening the isolation period, welcoming in a new year with Robyn appears to be in serious jeopardy.

In summary, I say bah and humbug to a very covid Christmas!

Dear reader, please make a resolution to treat your own loved ones, friends, and acquaintances with due respect when it comes to preventing the spread of covid in 2022. Meantime, while Lola and I continue isolating, enjoy a friggin’ Happy New Year. 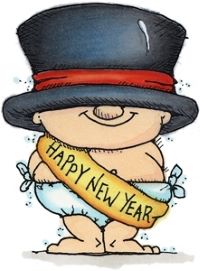