I have long had an uncanny ability to work out time zones (what time is it right now in Sydney where they are 8 hours ahead? Or in Minneapolis which is 7 hours behind? Or if I want a call with someone in New York and someone in Singapore, what time do we need to chat at – ish?

I also have an uncanny ability to work out date patterns, and I know instinctively what 6 months hence is, or what a month’s “half birthday is”… so to speak. I know, being born in March, that my half year point is September. I still sort of kind of maybe honour 27th September each year just because. And I know too that that for someone born in July, their half birthday is in January, and what not.

A weird talent. Useful for not a lot. Apart from the time zone thing and working out young children’s half birthdays. And my own.

I don’t count time anymore but it still counts me.

Rather than thinking three and a half years, which really is a mere snappit click of time, I started thinking in terms of days and months.

I won’t go into hours and days but there’s lots of them too.

And minutes. I remember the time – and they still come – when just getting through a minute was huge.

And it is already 15 months since Julia died. Someone asked me last night at the Maison de Tara how long it had been since Julia died, and for the first time I had to think – was it 15 or 16 months? I realise I count in months now. Not days or weeks.

Three and a half years is still to be marked. It is still an anniversary, if only a half-anniversary. Or deathiversary. I felt a need to honour Mike more than I normally do – each month on the 8th – with a little candle on my desk – often while I am doing other things.

I wanted to have more of a special event. I asked Medjool what he was up to but without mentioning the significance of the date – I know he has lots on in the week and didn’t want any sense of obligation. And let’s face it, he doesn’t miss Mike the way I do. He needed to be home.

I resurrected my Chick Flick Groupette – instigated when Mike was still healthy and working in Zurich. My sister responded that indeed she would come out to see a film with me and toast Mike. Perfect. She misses Mike too. And understands that I miss him more and more and more – which sounds weird to everyone except for her and a handful of other people.

I wanted an excuse for a glass or two of wine (which I have been cutting down on – no longer permitting myself to drink on my own, which is a significant thing since I am mostly on my own, but better for my liver, my sleep, and most definitely my piano playing).

Maybe it’s because Julia died that I need to honour and mark Mike’s 42 moons. Maybe if Julia hadn’t died I would realise afterwards that the date had come and gone.

There’s no rigorous study here with a control group. There are not many of us who have lost so many people in quick succession. If there were, I’d have more of a sense of what happens to missing of other people’s people when other losses come and slap their lives around.

I feel I miss Mike even more than I should do/would do, because I miss Julia. I miss Julia because she shouldn’t have died. (oh – of course that’s a ludicrous statement).

And I am mad at Mike for dying because I would have Julia and him.

And I still cannot believe that I appear to function with those two – and more – gaping holes in my life.

I will carry on counting moons for a while yet. 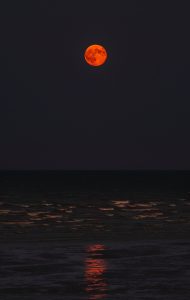 Image by Zoltan Tasi on Unsplash