In my first posting to this site back in the early winter of 2021 (February 4, 2021), entitled “Please allow me to introduce myself,” I described two of the existential issues I had to confront during the early days following Lee’s death: “So I was left to ponder the BIG QUESTIONS: Am I destined to die alone? Why shouldn’t I get a dog?” Today I address the second question to honor Lola the pup, who turns two on this date.

***
First, is it still appropriate to refer to her as “the pup?” Surprisingly, there seems to be no consensus of opinion about using such nomenclature, even among people who are familiar with the breed of Labrador Retrievers. An expression of my affection for Lola, I reserve the right to refer to her as my pup.

In fact, her registered name is not “Lola,” at all, but rather, according to the American Kennel Club, it is Zinfandel Lola. Zinfandel is the northern Ohio breeder from whom I acquired Lola, then barely eight weeks’ old. Her sire, a handsome fellow with a thick neck and broad shoulders, is a much-in-demand champion, whose lot is life involves traveling the country, impregnating female dogs for profit. Lola’s breeders presented me with his celebrity photograph. However, I did briefly meet Lola’s mom (and her aunt) at the farm on the day Eric, Julie, and I arrived there to fetch her home.

We departed the breeder’s property the same morning. I can still remember the sound of our vehicle’s tires crunching gravel on the long, narrow lane that led to a paved, 2-lane country blacktop. As I turned onto this county road, in my rear view mirror I caught a glimpse of the dust we had been kicking up in our wake. And with that, we said goodbye to Lola’s family and the breeders.

At first, Lola quietly whimpered. Soon enough, however, she had adjusted to her new life, and slept soundly in Julie’s arms nearly all the way back to Deer Tick Manor, our overnight way station on the journey home. In time I would learn that Lola is a get-a-long dog. 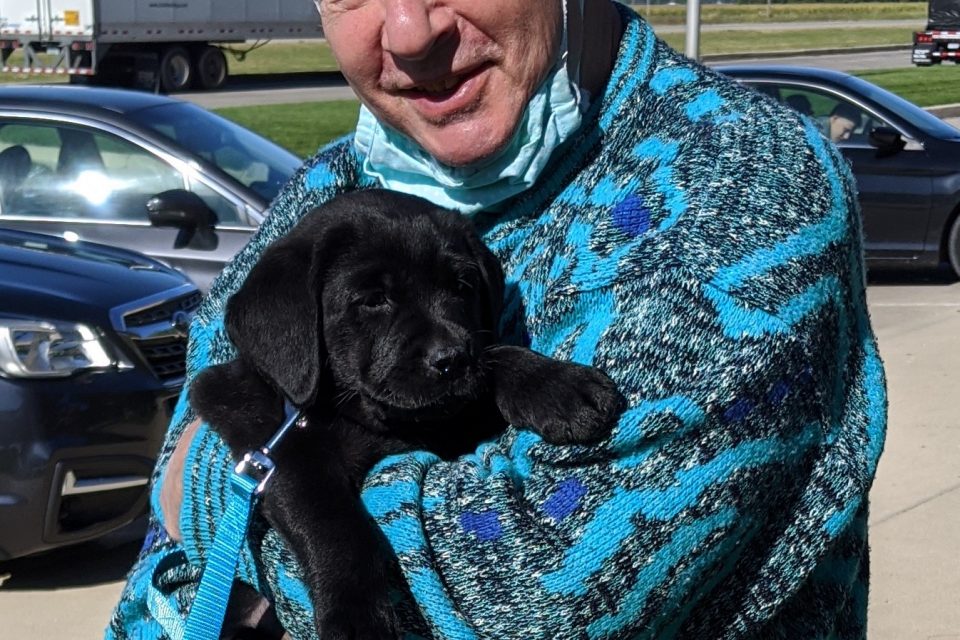 If the moniker “Zinfandel Lola” makes her sound like a bit of a “swell,” rest assured she is not. A princess, possibly, but, if so, this is entirely my fault. Yet, at the same time, Lola is a princess who is beloved by her subjects young and old. She holds court outside at the front of the property, safely behind our wrought iron fence. Lola enjoys running along the fence to greet them as they come and go about their daily business.

One beautiful young girl, always accompanied by her grandmother, makes a point to pass by Monday through Friday on her way to and from day care. I will observe that she appears momentarily disappointed if Lola isn’t outside to greet her. Neighboring adults will also slow down, even stop, to call out Lola by name. Lola’s presence seems to make everyone feel a little better. From Day One, Lola has had this same uplifting effect on me.

There is recent scientific research to suggest that pets are more effective for grief support than humans. See, e.g., “Pets More Effective for Grief Support than Humans, Study Finds,” at https://www.madinamerica.com/2021/06/pets-effective-grief-support-humans-study-finds/. The article reviews the results of a 2021 study led by Joanne Cacciatore, an associate professor in the School of Social Work at Arizona State University, which led Cacciatore and her team to conclude that, “When it comes to good grief support, perhaps we may have much to learn from our fellow non-human animals.”

Like most folks, back in September 2020, I was stuck at home in the throes of the pandemic. Certainly I was alone, but I also felt sad and lonely for Lee, who had recently passed away after a lengthy fight with cancer. Lola made certain that I was entertained and distracted sufficiently to occasionally put aside my grief. During this time I welcomed any respite.

There is nothing false or forced about Lola’s affection for me, which I craved then. The ability to show love comes to her naturally. Even today, as settled in our respective ways as we have become, when Lola suddenly dashes madly about the house, running back and forth for the sheer joy of it, I must stop whatever I else I am doing to laugh aloud and smile. Whether at home or out on a trail, I find it reassuring that she will search me out if we are apart for any considerable time.

Of course, this tendency on her part is not necessarily convenient. For example, there have been several occasions when Robyn and I have been enjoying a spontaneous hug (or two) only to have Lola wriggle and squirm her nearly 70 pounds of dead weight between us. Although it might sound anthropomorphic, I feel at such moments that Lola is jealous because another female is displaying affection. I do not believe Lola’s behavior has anything to do with the fact that Robyn is no animal lover. Rather, I am certain this fact bothers me far more than it bothers my judgment-free Lola.

To return to my second existential question concerning dogs, based on what has transpired these past two years, I stand by my decision to get one. Later today, to help me celebrate Lola’s birthday, I have invited Julie to come by with her dogs, Oliver, and Maisie. However, I have not extended this same invitation to Eric, her husband and my long-time friend and business partner. Like Robyn, Eric is not an animal person.

Well, the way I see things, it’s their loss. Meanwhile I will have a supply of fresh bones and treats on hand for the celebrants on this very special occasion!