Many years ago, my brilliant childhood bestie, Nathalie, said of Influencing (in organisations), “To influence, you must be willing to be influenced by the other”.

I don’t remember what got us on to the topic of influence at the time, but the comment has stayed with me. I believe it to be true. Influencing has to be a two-way, not a one-way, process.

I am not sure if Nathalie remembers saying it, if it was her own invented saying, if she’d picked it up from someone else, or indeed if she even believes it to be true, still, today. I suspect that a good 1 ½ decades have come and gone since she said those words to me, but they still come into my mind often. And not just in the context of organisational influence.

I have just finished a 2-day workshop on “Being with spiritual suffering at end of life”. Yes, this is the sort of thing I get up to on sunny Saturdays in September. Facilitated by Tanguy Châtel, and courtesy of the generous founder, Anne-Marie Struijk, of La Maison de Tara, for the ten or so anglophone and francophone people who facilitate the year-long training programme for new volunteers.

Where Edward spent his last Christmas.
Where I had my 50th birthday.
Where Julia had her 13th birthday.

So many memories for me. And so many other people too. Innumberable last birthdays and final Christmases. An amazingly nurturing, place that emphasises living (not dying).

The questions we discussed in the two-Saturdays programme were not just “What is Spiritual Suffering?” and “How to be with a resident’s spiritual distress at end of life?”, but also “Who are we, and how are we transformed by being with someone’s spiritual distress/ questioning/ suffering?”

And of course, unsurprisingly, we come back to the necessary skill of Witnessing.
Being with.
Not judging.
Not knowing.
Not having answers.
Not fixing.

Simple.
And not simple.
Easy.
And so very hard.

Some of the beautiful language and metaphors used in the workshop were along the lines of “going down into the depths of the well of despair with someone”.  Sitting, staying, down in the hole together, in the dark.

Without answers.
Without even questions.
Just being together.
Neither one the guide or the leader.
Neither one the follower.
Together-alone, on a quest. An exploration.
Which will probably result in both of us feeling powerless.
Possibly for long periods.
But through which something new, something different might emerge.
Perhaps.
Maybe.

But connection, yes. Connection in the Void. “Le vide”.
And yet, Nothing can fill this particular void.
For there are no answers.
No knowledge.
No wisdom.
No solutions.

Nothing makes a difference.

Except for Relationship.
Connection.
Seeing.
Being Seen.
Witnessed.

Sharing in the experience of being down in the pit, in the depths of despair, is the medicine.
Is what might nourish, change, transform, both the person experiencing spiritual distress, and the person down there with them.

In my notes today I wrote:

Nourishment of one another. Not one the guide and another the follower, but both together.Both willing to be changed, both able to be somehow nourished, by the experience.
Nothing solved.
Nothing fixed.
And yet changed.

And for this to happen, we have to be willing to be changed. To be touched. To be influenced.
By the other.

Thank you, wise Nathalie. I don’t know if you realise the Truth of your insight all those years ago.

I would now like to add to your wise words: 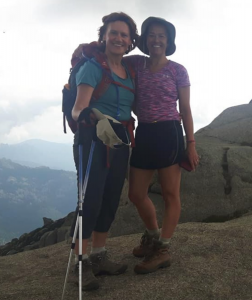