With Mari’s departure on Thursdays, we’ll be featuring repeats from Mike’s posts over the years.  Enjoy this piece, originally written in 2016.

You don’t realize how important the little things are until you don’t have them.  It could be something as simple as sitting on the couch, watching TV until you fall asleep with your partner, and it is taken for granted.  Then you lose that person.

I’ll admit that I was eased into some of the more technical aspects of the widower role, being that Megan had spent so much time in the hospital over the years.  There were plenty of times where I was a temporarily single father.  Making sure Shelby got to school and was fed and clothed was never something I struggled intensely with after Megan died.

Even so, there were plenty of things I still took for granted when Megan was here, and some of those things are surfacing over the past few weeks.

Shelby turns nine years old tomorrow.  That fact, in and of itself, isn’t a new emotion or trigger.  I have already been through one birthday without Megan.  What is different is that this will be the first time that I am arranging a real party for her birthday.  This was always Megan’s department, and it was effortless for her.  I, on the other hand, have been flummoxed.  I don’t know the parents of her friends at school, and I didn’t know where to hold the event.  I didn’t know if I was supposed to order a cake, or make one.  I’m not entirely sure what the etiquette is for invitees that don’t RSVP, but show up anyway.

Megan handled all of this over the first seven years.  I was the honey-do, and she was the planner.  I let her run the show from top to bottom.  Now, I’ve been thrust into that role.

I can plan a two-week long wilderness trip, or a project plan for my work without a second glance, but if you ask me to plan a birthday party for a little girl, I’ll just stare blankly until some hairbrained idea comes along.

Somehow though, we’ve managed to get invites out, book a roller-skating rink, and we’ve planned food.  We needed to be forced into doing something for Shelby’s sake.  When I told Shelby of the plans, she was beyond excited, and seeing her jumping up and down, ready to tell her friends was the “payoff” I needed after stressing over it for a few weeks.

Sarah had a huge hand in this…pushing me along, providing ideas, and most importantly, offering support when I wanted to just give up and say we would just take Shelby to dinner.  She lost her own mother at almost the same age as Shelby, and she knew how important it is to continue with traditions like this, regardless of if both parents are present.

Which leads me into another thing I’ve taken for granted.  Winter finally hit here in Ohio over the past week.  Snow, cold, clouds, and all.  Growing up here, I know that this comes and goes every year, and I have learned that you just have to be patient, and spring will come soon enough.

But Sarah didn’t grow up here.  Hell, she had never even been to Ohio before she met me.  Through all of the aforementioned party planning, she’s been looking out the window, and seeing gray skies and falling mercury.  She’s homesick, with good reason.  She won’t be able to wear shorts outside for another two months or so.  Instead of western boots, she’s wearing pac boots.  Her oldest friends are over a thousand miles away, and she’s just starting to meet more people here and show her art locally.  I don’t take any of this lightly, and I do everything I can to make her feel more at home, but sometimes, just a sunny, 60 degree winter day is all that will help.

As a widower, dating a widow, I have seen the significance of the little things grow.  I cherish every minute that I get to sit on the couch with Sarah and Shelby and watch television. I am so appreciative of Megan for planning all of those birthday parties over the years, and quite honestly astonished that she could do it.  I am beyond happy that Sarah has chosen to uproot everything she has known and move to Ohio, no matter how homesick and cold she may be.  Even things that were stressful in my past (Megan’s hospitalizations, for instance) have become small silver linings, that prepared me for where I am now.

In fact, none of these experiences have been “little”.  They may have seemed so at the time, and been taken for granted, but if losing Megan has taught me anything, it is that nothing should be taken for granted.  Not a birthday party, a night on the couch, or a cold breeze across someone’s skin that is unfamiliar with it.  Not only could it be the first time you experience something, it could also be the last. 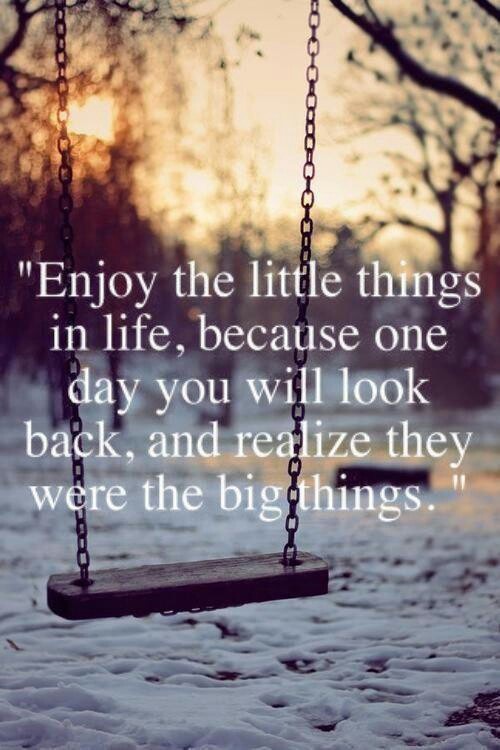