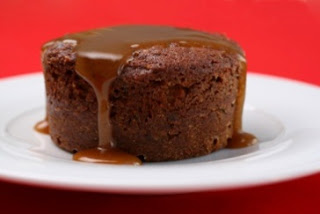 I’m on my way to pick up the kids at preschool and decide to stop at Panera to grab a decaf with extra, extra cream and no sugar.  I wait in line thinking about all that I have accomplished in my kid-free two and a half hours when I hear the woman in front of me order a Sticky Toffee cookie.   I’m transported back in time.

I’m in England five years ago with my dad, stepmom, stepsister and Chris.  We’ve just spent a week in Ireland and are finishing up our vacation with a three day stay in London.  We are eating a traditional English meal at a pub and after our dinner, our waiter asks if we would like dessert.  He lists the options and ends with, “And then there is the Sticky Toffee,” with a typically British accent that makes the dessert sound much grander than it actually is.  The delivery is so convincing though that, don’t you know, five minutes later we are all enjoying several servings of this delicious concoction and cracking ourselves up by repeating to each other over and over again, in our pretend accents, the words: Sticky Toffee.

“Would you like some Sticky Toffee?”  Cue uproarious laughter.

“Why, yes, sir, I will have some Sticky Toffee!” One of us coughs out a chuckle.

“Would you be so kind as to bring me some more Sticky Toffee?”  Giggling erupts through Sticky Toffee-stained teeth.

“Have you heard about our world famous Sticky Toffee?”  Someone actually snorts.

The pints of beer we consumed earlier in the evening only intensified how hilarious we thought we were.

This was our running joke for the rest of the trip.  A few weeks after we returned, my dad, stepmom and stepsister came over to look at the pictures from the trip and Chris surprised everyone with homemade Sticky Toffee.  He was a fantastic cook and his version rivaled the original one.  And again, we amused ourselves by sitting around repeating the words “Sticky Toffee” to each other.

After a few weeks, as can happen with inside jokes, the Sticky Toffee references came less often and eventually, we dropped it altogether.  Only on rare occasions would it randomly come up when our Ireland/England trip was referenced.  And then, I completely forgot about it.  Until the woman in front of me at Panera orders a Sticky Toffee cookie.

Now all I can think about is that trip and how my husband was a saint to agree to take one crabby old man, one sweet but slow old lady and one thankfully normal stepsister on a vacation with his wife of just one year.  As an extremely experienced traveler, Chris took on the responsibility of planning the entire trip from the towns we would visit to the places we would stay to the sites we would see.  He was the only one brave enough to drive a car through the unpredictable terrain of Ireland all on the wrong side of the road.  He tolerated complaining, cancelled plans, unexpected delays and way too much family together time.  I won’t say he did it all with a smile on his face because anyone who knew him, knew that he liked things to be a certain way.  He liked to be in control of his time and didn’t normally have patience for people that slowed him down.

I could hug that woman in front me at Panera who ordered the Sticky Toffee cookie.  She just reminded me how lucky I was to have experienced that kind of love.