Sailors of old had the right idea.

They looked to the stars to place themselves as they rode the ocean waves.

I’m here, they could say, after sighting particular stars and constellations.

Rising stars and setting stars dipped above and below the horizon at set points of their days and nights.

They watched the night skies and they measured the sun.

Both kept them grounded on the open sea.

Knowing how to locate true north, and, thus, south, greatly increased their chance of survival.

Those two points made it possible for them to navigate the broad and unknown, and often terrifying, expanse of water, into a safe port.

I’ve spent hundreds of nights and days on the open road in these 7 years since Chuck died,

Staring into the broad sweep of sky overhead, lit with the same stars and constellations used as set points since man first set sail in a boat.

I seek out Orion’s Belt, no matter where I am, 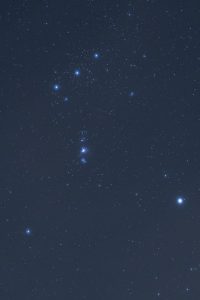 And it gives me a sense of placement in a life where I feel displaced.

I stare at the moon,

And remember gazing at that same moon with Chuck, hundreds of times over the years.

He’d grab my hand and say Come with me and look at the moon tonight!

Did you know that Orion’s Belt is also called the Three Kings or Three Sisters?

I just learned that tidbit, so I share it with you here.

I revere the stars scattered across my world.

My footing is unsure, mostly, as I go about living this life without Chuck.

Allows me a handhold,

Something to grasp, if only with my heart.

Those 3 stars, always present for me, no matter where I might be,

Those kings and sisters,

Shimmer and shine and center me.

I’m everywhere and nowhere, but they are always there, teasing my gaze towards them,

As they teased sailors long gone from this world, since the beauty of stars was first discovered.

See how the stars shine for you.

Cradle them lightly in the curve of your hand, 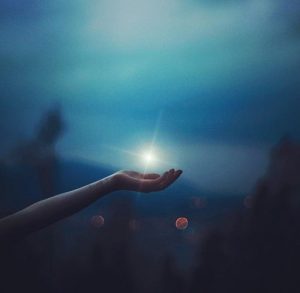 Balance on tiptoe, reaching towards their faraway twinkle,

These infinite pathfinders, helping us navigate the uncharted depths of life without~