The surprising journey of widowhood.

Part of the widowed journey, as I experience it, is having to face new things. Some new things contain the kind of surprises you don’t want to receive. For example, if your partner always took the dog to vet, then the first vet visit on your own might surprise you with a large dose of stress. For me, it included crying in the vet’s office and her saying, “Here….let me get you a chair.”  If your husband was your rock when you were out of balance, you might be surprised by how weak and inadequate you feel when things are off kilter. New things require solutions and sometimes it all feels like too much.

What I am also finding is there can be fun surprises that show up as well. Like me, after having a melt down not knowing where I stashed my laptop, and then an image pops up in my mind showing where to look. Or when I found a new meaning for butterflies.

One of our kids asked Dan how we might see him after he died and he said he would show up as a hawk, which is so Dan to want that tough bird exterior to traverse his new surroundings. Not knowing if one can choose the way they present in the afterlife, we kept a lookout for any and every kind of creature that might remind us of his presence.

The mysterious gift of presence.

Before Dan’s cremation, I felt him so close. At times I heard him call my name. I felt his touch in subtle ways; so gentle that I would doubt myself later when I would remember it. His presence was tangible. After his cremation, when I brought his ashes home, it was different. He felt distant. The reality of him being gone was undeniable.

One day, in our backyard, a large, sturdy looking, orange Monarch butterfly came into the yard. It flew by me twice, not close, but intentionally. Then it flew into the garage, cruised around a bit, and then left.

Now I notice this butterfly coming around regularly. Just once it came rather close. After the third sighting, I told the kids and now everyone is on the lookout for this manly monarch. At least once, when the kids were around, I found myself exclaiming, “Hey! There’s dad!”

What I know for sure is that this sign of his presence brings me the surprise of unexpected joy whenever I see it. In my new life as a widow, that contains so-many-unknowns, this small sign is pure gift.

The four-pawed members of our family.

Dogs have always been a part of our family. When we were first married I borrowed five bucks from my father-in-law to get some shelf paper. On the way to the store, I stopped at the dog pound where I found this sweet little puppy who was destined to be our first dog. I used the shelf paper money to buy her and brought her home. My father-in-law called her, “Five Dollar Dog” and we named her Snookie. She was our first baby and the first of many beloved Neff dogs.

Ash was the dog that traveled with Dan through his cancer journey. A wonderful companion, Ash was known to friends and family for her desire for human affection. 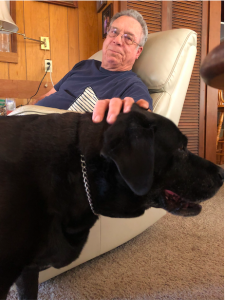 Part Lab and part Pitbull, she was known to the mail carrier, and intruders on her turf, for having a scary, deep, ferocious bark. 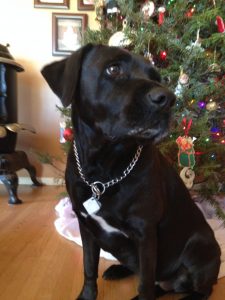 Dan and I used to joke about Ash being our marriage counselor. When we were in a disagreement, sometimes one or another of us would try to get Ash on our side.

“Ash, your mom is not being nice,” Dan would say. Lying on the floor, she wagged her tail, (flop, flop, flop) which he took as her agreement.

Ash died of old age in July of 2020. Both Dan and I, and our grandson Izaak, sat with her as she peacefully died on our patio. She is buried in our back yard.

In his last days, Dan mentioned that he regretted that we did not find another dog to be with me after he passed. So when our daughter, Danielle, called to ask if I was open to a puppy I said yes immediately. Turns out the next day I drove to San Diego to pick up this little sweetie. Her given name from her owners was “Indy” which we kept, but we nicknamed her Indiana Jones in honor of Dan who was a fan of the Indiana Jones movies. 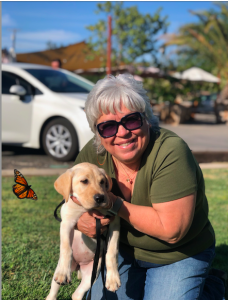 Indy, a Labrador Retriever, was purchased in Arizona by a couple who enjoyed her for 3 weeks before their employment situation changed and they sadly needed to re-home her. Danielle was online when the notification from a neighbor-to-neighbor site popped up. She was the first in line to volunteer to buy this sweetie. Of course, there were many others in quite a long line of interested folks in the minutes and hours following her reply. In the end, they selected us to take her home.

Just like the butterfly, or my lost computer, who knows what our loved ones can effect from afar. But Danielle said, “My dad told me to buy this dog for my mom” and we feel his strong hand in the gift that this little one has been for me.

Which brings us to the Dan Neff Dog

The Dan Neff Dog, aka “The only thing I know how to draw” has become our family mascot. In writing this post I realized that I had to include the Dan Neff Dog here because it is a symbol that meets or exceeds the metaphors of butterflies and puppies in our life right now.

Dan Neff was a tough ole cowboy and the “only thing he knew how to draw” showed his tender insides. A sweet little pup we have named, The Dan Neff Dog, shows his warm tender heart which was his truest self.

It is his loving heart that lives on into eternity. The big-hearted guy who loved us so well is loving us still. Loving us through the butterflies and puppies and The Dan Neff Dog. Loving us in all the tangible and intangible ways he reaches across time to let us know we matter and to let his love touch us in whatever way possible. 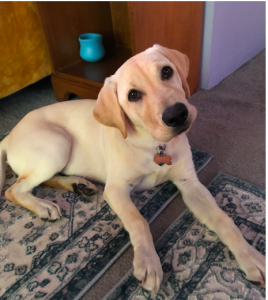 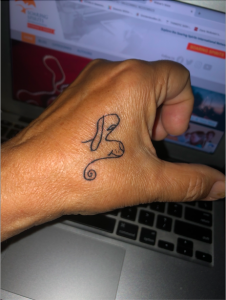