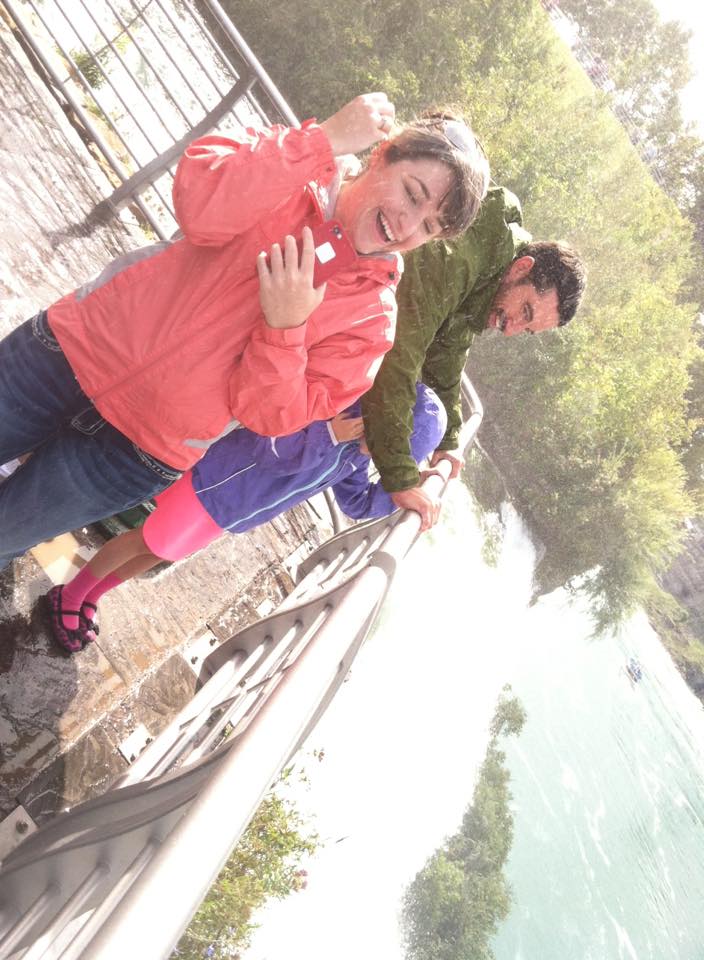 I won’t delve any deeper into the spiritual aspects of loss other than to say that I believe that Megan can still witness where our lives are taking us.  Last weekend, Shelby, Sarah and I drove to Buffalo to meet Sarah’s sister for lunch, and we decided to take a short trip to Niagara Falls from there, as Shelby had never been to them.

I wrote last week that I had never taken Megan there, and how complicated that thought was.  For some reason, I decided to make it more complex, and take Shelby there less than a week later.  The thoughts, after processing a while though, have become simpler.

I’m happy.  Shelby is happy, and Sarah is happy.  You can see it in the picture.  At that moment, we weren’t thinking about Megan or Drew.  We were being happy together, staring into the mist.  For that few hours, we were enjoying life, rather than processing death.  I must admit, the thoughts crept back in later that night, once we were home, but it wasn’t the regret I talked about.  It was honest, actual mourning.  I wanted nothing more than to have Megan see how happy we all made each other, and I was mourning the fact that she couldn’t.

But she can.  So what I really was mourning is that I couldn’t hear her response or see her smile.  We really have no way of telling if she is pleased with where we are.  All we can do is assume or look for signs.  Drew was flying around all afternoon (we had a yellow helicopter circling us the whole time we were there), but other than dozens of weeping willows (that we somehow didn’t notice a week ago), we had no clear sign of Megan’s presence.

Sarah and I have talked hundreds of times about signs of the two of them, and we’ve come to the conclusion that since they brought us together, that must also mean that the two of them are together on the other side.  It makes sense, knowing each of them as we do.  Megan was likely in that helicopter with him, watching us getting soaked, and seeing Shelby’s eyes lighting up with wonder as she stared into the gorge below.  Drew is Megan’s pilot now, and he can ferry her around to watch us both.

Perhaps signs are simply our own minds’ way of bringing us some comfort by assembling a situation into something the human brain can process.  Perhaps they truly are controlled by the dead, weaving their ethereal hands into fate, and making something appear or happen.  That helicopter, from a logical standpoint, is just a scheduled tour flight that takes off every 10 minutes or so and circles the falls.  The owner, at some point in time, decided yellow was a nice color, and bought one.  Sarah and I (and now Shelby, as she knows the story) consciously decide that it represents Drew and Megan, flying around watching us, even though the pilot was probably named Stan, and the people inside were named Ethel and Harold, for all we know.

But what if?  What if Megan decided to plant the thought in the owner’s head to schedule his yellow helicopter for that day?  What if Drew was the one to somehow persuade the owner that yellow was a nice color?  Perhaps my grandmother made sure it was sunny, and Sarah’s mother took care of making the winds blow upstream, rather than down, so we could walk to the base of the falls.

Regardless of what you beleive, I choose to believe that they influence fate.  We have free will, but they can present a situation for us that will make us happy, if we are observant and make the best of it.