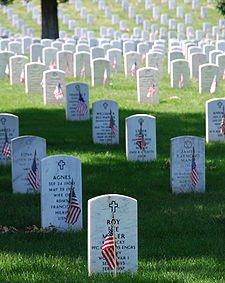 Memorial Day is a United States federal holiday observed on the last Monday of May. Formerly known as Decoration Day, which was first recorded to have been observed by Freedmen (freed enslaved southern blacks) in Charleston, South Carolina in 1865, at the Washington Race Course, to remember the fallen Union soldiers of the Civil War. The recognition of the fallen victims was then enacted under the name Memorial Day by an organization of Union veterans — the Grand Army of the Republic — to honor Union soldiers of the American Civil War. Over time, it was extended after World War I to honor all Americans who have died in all wars. Now known as Memorial Day, it is a day of remembering Armed Forces. the men and women who died while serving in the United States.

That is a little bit of history, by way of Wikipedia. I turned to the net to get a clear understanding of what this holiday represents, and how it came to be. Today I was out, just like most Americans, being a part of the hustle and bustle that is the last weekend in May. It is often considered the beginning of the summer season, and signals the onset of weekend BBQ’s and family gatherings. I noticed while running around town, that there were a few homes that hung American flags. I began to feel bad, because my flag is still in storage, not that I think to fly it very often.

I was remembering when 9-11 hit, and we as a nation were left stunned. What I remember most, after the communal feeling of devastation, was that we all became quite patriotic. Many of us, including myself, ran out and bought shiny new flags. How is it that we have so quickly returned to that place of disconnect. I don’t mean this to be negative, or judgmental, as I include myself in this. Somehow, for most of us at least, we forget to remember that for many, this is a difficult day of remembrance.

Today we honor all those men and women, from every walk of life, who selflessly chose to defend this country, and have given their lives in exchange for our continued sense of security and freedom.

Today, we also honor all those who are left behind, who continue to raise their children alone, who continue to seek meaning in their lives, who continue to attend college, or work, on a daily basis, because that is what they are expected to due. These are the survivors, and we must not forget them. Not today.

I just finished my BBQ. It consisted of burgers with two 13 year old boys. The discussion at the table was summer camps, and the daily joys of skate boarding and scootering. How young, and naive they both are. The world is still about the daily joy of doing nothing, or doing whatever they choose to do. I sat there listening to the nonsense that was coming out of their mouths, and hearing the laughter when realizing how ridiculous they both sounded to this old guy across the table.

The meal has finished, and everything has been cleared away for the evening. I returned here to my computer, to finish this post. The sun is still out, and it’s a clear indication of sunny days ahead. Yet, for those of you who have lost a loved one due to war, or any type of service to our country, the night is not quite over yet, is it? You still have grieving on your agenda.

When the sun does finally decide to set, I will light a simple white candle, and hold vigil for those that have served, and for you that mourn. You are remembered today, just as they are.