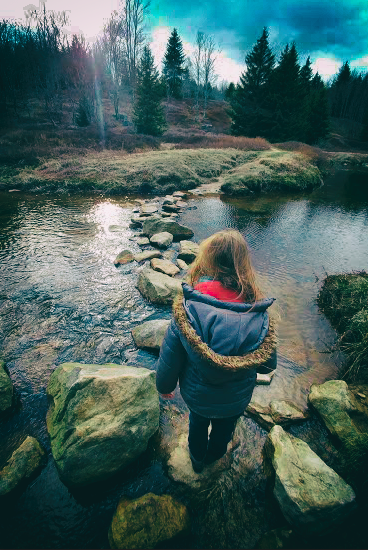 It was just a little walk.  As we pulled up to the trailhead on Canaan Valley National Wildlife Refuge, there were very light snow flurries.  We were at 4100 feet above sea level, and had plans to hike along the western ridgeline at Dolly Sods, the highest plateau east of the Mississippi.

Sarah, Shelby, and I took a trip this past weekend to the area.  Shelby had been here once before, I had been here at least 15 times, and Sarah had never been.  I wanted to show them both a few of the varied landscapes and terrains that are unique to this place, and I figured a day hike of a few hours would suffice.

10.5 miles later, I quite possibly had learned more than they did.

Our hike started through a Rhododendron thicket, green and almost jungle-like.  Shelby was chatting away about interesting plants and rocks she saw (she has a better view, being so close to the ground).  We tip-toed on rocks around some boggy areas and tiny creeks, and she was enjoying her continued fascination with waterproof boots.  As we checked off our first mile, nearing the initial major trail junction, she asked if we would be going to the place where Megan, her, and I had backpacked.  I responded that we may, but it was about 3 miles away from this spot.

My plans were to take them out on a different trail, one that affords views of Canaan Valley, and the wind farm on the opposing ridge.  It’s wide open, and sure enough, we were already under a high wind warning.  After that, we were to drop down into a small creek valley and have lunch before turning back towards the truck.  Part of me didn’t want to go to the campsite that Megan and I shared with her.  It was the only time we had ever backpacked as a family, and I foresaw a trigger if we visited.  The two days we spent out in the wilderness as a family were more meaningful to me at the time than I had let on.  Megan had received her transplant only 9 months before that, and it was the first time she was physically able to hike that far with a pack.

We pushed west instead, out onto the ridge.  Shelby’s interest with plants and the day’s plans quickly turned into a desire to keep from blowing away.  Her hat flew off, and with her loud squealing laugh (the same one Megan had) she grabbed it, placed it back on her head, and closed the chin strap.  She and Sarah stayed close, chatting away, while I scouted about 20 yards ahead, turning back to make sure they were still doing OK.  Even though they are both able bodied, there is a need in me to constantly check on their wellness.  Chalk it up to over a decade of worrying about Megan’s health.

At the next trail intersection, where I had initially planned to drop into the valley to the east, I made a decision.  We would push on further along the ridge to the next trail.  They were both enjoying the winds and views, so I wanted to continue for a bit.  It would only add a mile or so, and we could turn around after lunch and head back.  Neither of them questioned the decision, and Shelby seemed eager to have a little bit longer hike.

We reached our crossroads, and started descending.  As we did, Shelby began asking when we would get to our lunch spot.  She knew we were going to have a small campfire, and true to her trail name, “Pyro”, she couldn’t wait.

By the time we reached the small grove of Red Spruce, beside a beaver pond-fed creek, we had already done 4 miles.  As I dropped my pack and we all began gathering fire wood, I realized that this was the longest hike she had ever done, and we still had 4 miles to get back.  We stayed there for about an hour, having freeze-dried meals and water for lunch, while sitting beside a small fire I built to help us warm our feet. 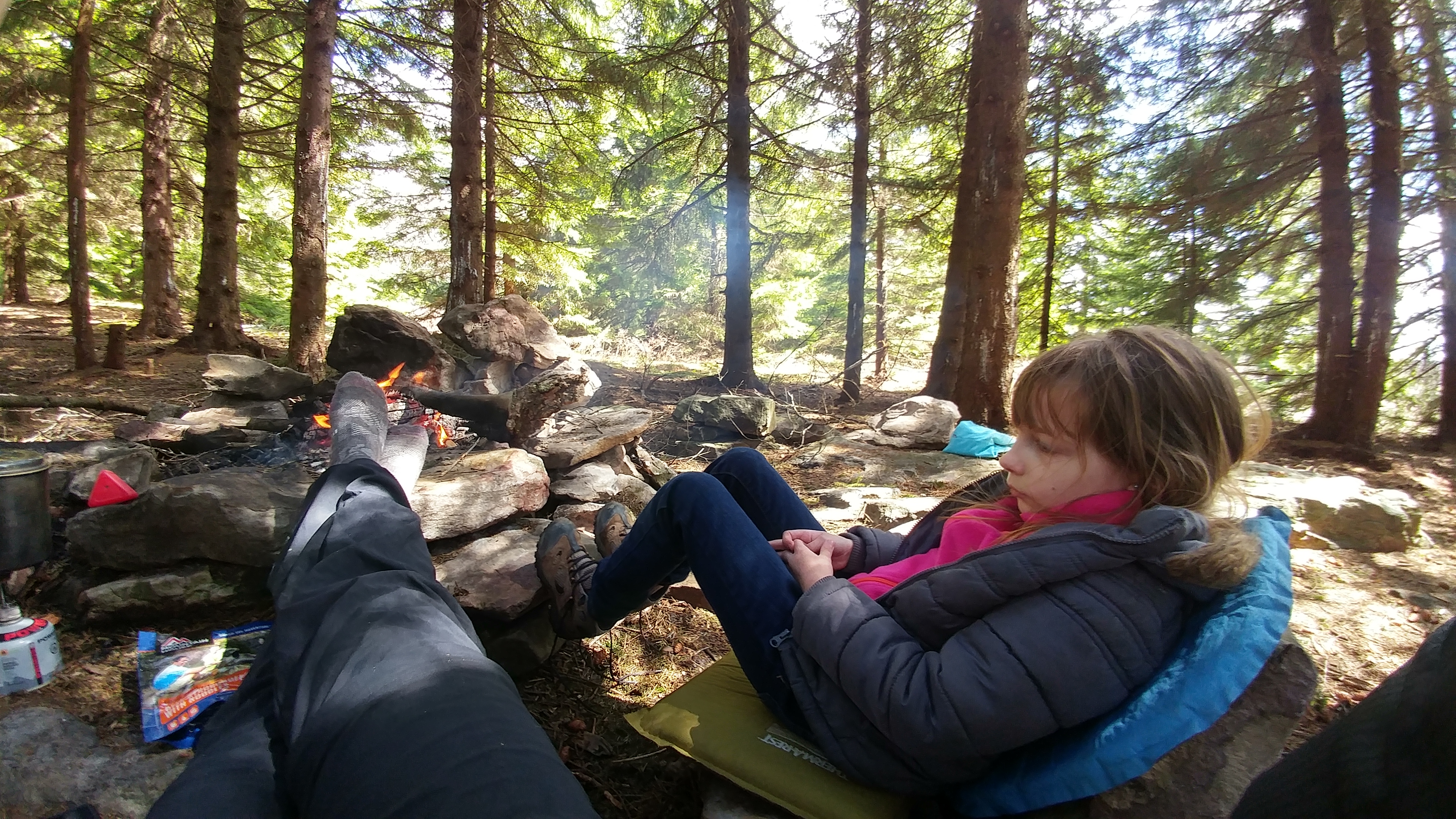 Shelby was only 4 years old when we backpacked in Dolly Sods.  I didn’t know how much she remembered, but as it turns out, she could recall the entire thing.  She remembered the small waterfall we had beside our site.  She remembered the campfire, and the cocoa, and the meals.  As she finished her chicken and rice lunch, she asked again if we would be going over to that site.  By this point, I knew that was probably out of the question, and I told her so.  She shrugged it off and threw some pine cones into the fire.

As we left, we decided to bushwhack to shortcut the next trail.  Hopping through bogs, and thick underbrush, Shelby was happily exclaiming how many times a stick brushed her face…I think it was 56 by the time we reached the open trail that started leading us back to the truck.  She was tiring by mile 7, so we took a break and had some water and granola bars.  It was during this break that she lied on a boulder with Sarah, both of them becoming slightly grumpy over the previous mile or so.  I sat across the trail on my own stony seat, and I could barely hear them because of wind, but they talked about something.

When we stood back up, after five minutes or so, she had suddenly got her second wind.  She did not stop chatting the rest of the way, but this time, it wasn’t about interesting sights or plants.  She realized how far she had hiked, and could think of nothing else.

“I feel so accomplished” is what she said around mile 8, as we neared a thick grove of spruce.  “I’m so proud of myself” came out beside the creek on the other side of that stand.  None of this was prompted, or brought up by us.  She realized it herself.  She didn’t need any assurance from Sarah, Megan, or I.  “I can’t wait to do this again” and “You really learn a lot out here” came out as well.

I almost melted, as did Sarah.  For a nine year old to have this self awareness and view of her own accomplishments is awe-inspiring.  This little girl lost her mother less than two years ago.  Our “team” had always encouraged her and let her know she was something to be proud of, but now, in the West Virginia wilderness, she was learning it herself.   I still don’t fully know what to think a few days later, but I know that I am incredibly lucky that Megan was who she was to this little girl.  I am incredibly lucky that Sarah is just as self-aware and encouraging to her.

She’s growing up, using the tools that Megan provided her in her short 7 years with her.  She’s taking those tools and applying them to life on her own.  She realizes that Sarah is not her mother, but she respects and loves her, all the while forming her own maturity.  It’s amazing how much Shelby takes in and retains.  She is a mini-philosopher with pink glasses and wide eyes.  Never do I wish Megan was here more when things like this happen.

It’s not the scheduled or common events like birthdays, report cards, grade ascensions, or even riding a bike that would make her smile.  It’s the times like this, in the wilderness, when Shelby seems to mature by a few years with no real outside influence or expectations.  Megan doesn’t get to witness these events.

She would be so damned proud. 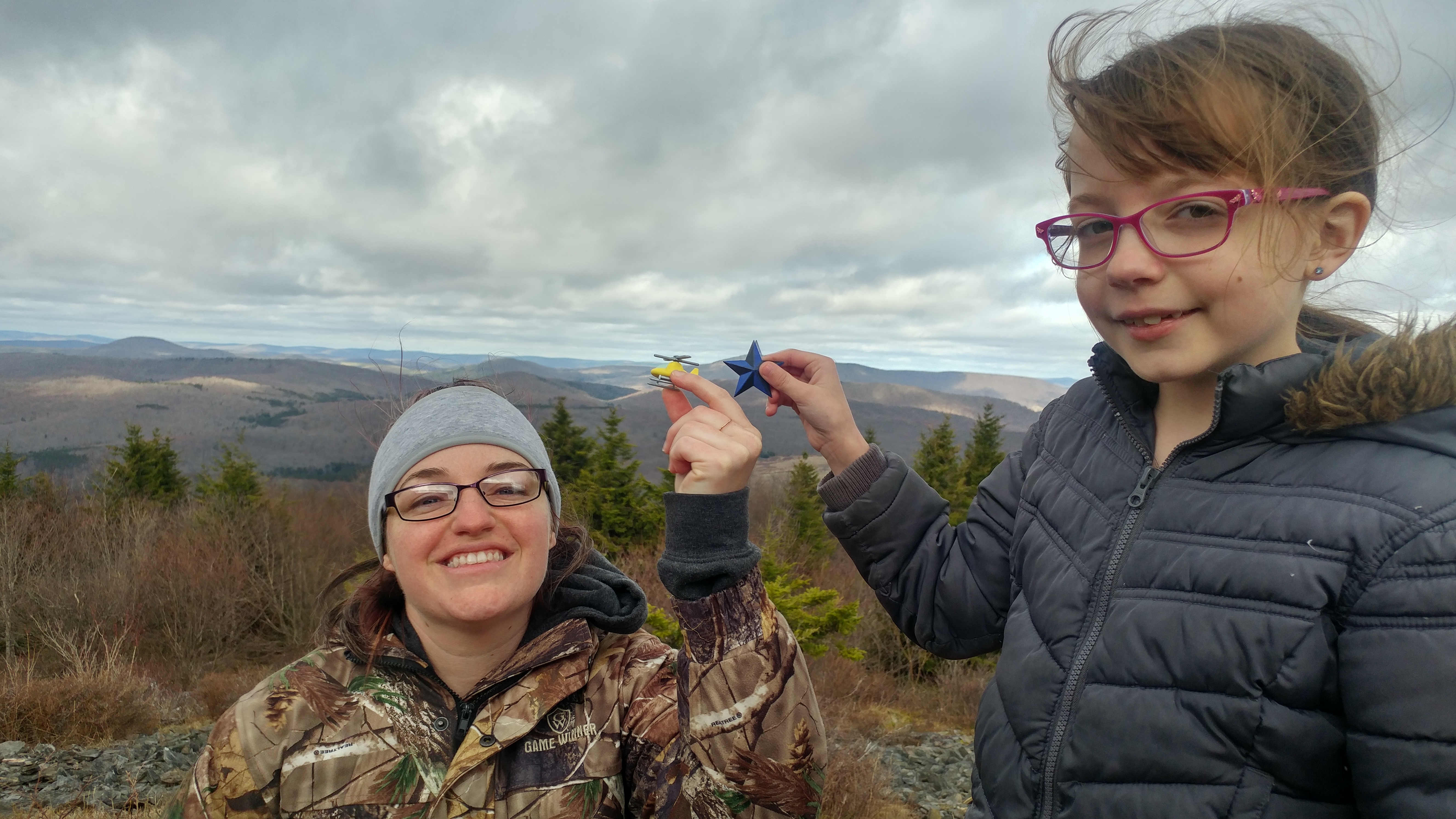