My fiance died in 2012. In the spring of 2014, I began creating a photographic series about my grief, called “Still, Life”… sharing weekly self portraits that captured my pain, hope, confusion, anger and everything else that comes along with grief.

I worked on this series for about a year, creating 40 haunting, hopeful, honest images… with each one, I wrote a brief essay that talked about what that particular image represented about my own story. As it turns out, sometimes I wasn’t even entirely certain what the story was when I would go out to photograph myself. Sometimes I just wandered, with the camera, and let my intuition guide me. So when I would sit down to write about each image, many times, the personal meaning would begin to reveal itself there. More times than not, I would end up in tears as my typing fingers led me to the true, deep feeling of the image.

I wrapped up that series in a rather unceremonious way…. I just sort of faded out, from the pure exhaustion of it all. There was no grand finale. No final profound photograph to end the journey of the project. I just sort of lost my desire for it, or felt ready to stop looking so deeply at my grief after a full year of intensively doing so.

Looking back, I realize now, the way the project ended was just like everything in this “after” life. It was exactly like making it through the first year of his being gone… something I’d imagined would feel pivotal, like I’d graduated to the next level or something. Only it didn’t feel that way at all. Instead it felt gut-wrenching all over again. Because still, after making it through a whole year, he was not going to come back…

I have almost entirely avoided taking self portraits in this way since that project ended. I think a part of me needed to separate from it all. And maybe, that part of me that was still holding out hope that he would come back, finally died. I met someone new around that time as well, and began the scary journey of opening up to love again. But somehow I couldn’t capture that journey the same way. Somehow I just didn’t have it in me, and still I don’t know why.

But a few weeks ago, somehow, the fire in me came back. The desire to create a new self portrait. It was an old idea really, one I’d had for the old project, but due to living in a southern part of the country I couldn’t create it. Now living up north, I had the winter weather to do it… a full-body photograph of myself beneath ice.

It’s strange. I’ve lived in Ohio now 2 years, and neither of the previous winters did I feel drawn to make this photo… despite having it bugging me in the back of my mind for years now. But suddenly, weeks ago, it just seemed time to do it. So using an old glass door that I poured water over, I put myself into an old vintage wedding dress and crawled underneath to finally create this image.

As I shared it this past week finally, so many people had thoughts and feelings to share about how they view it and what it evokes for them… seeing it as trapped by something, or as strong and determined, or as feeling ready to break free of something. It has been wonderful to hear the stories that others have found in this image, and just as with my older images, as I’ve taken a longer look at it, I think this photo tells so much about where I am in my own journey.

For me, it’s about being ready to emerge from the winter of grief and loss… feeling ready to redefine who I am now and take the next step forward in my life. It is also the very first self portrait that I have done in color… and although muted, it is still a big departure from the colorless world I found myself in years ago. The colors are subtly growing. Perhaps, spring is finally on its way. 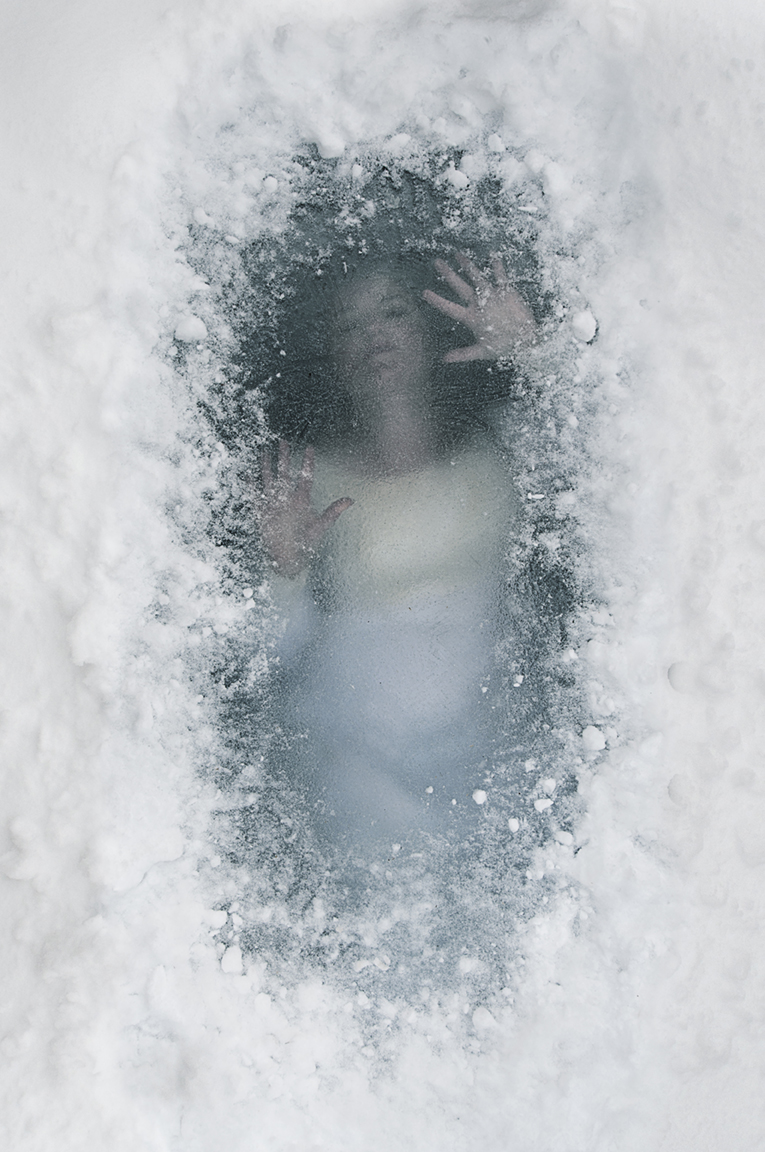