In most other languages, the onomatopoeia that we use to describe these birds does not exist. We call them hummingbirds because, like flip flops and ping pong, it describes the noise made rather than the name of the thing itself. The word most other languages use instead is “Colibri”.

This is significant for two reasons. One, I find the word more elegant than hummingbird. And two, I have used this word as the name of my own business (spelled Kohlibri Coaching). Why?

When Suzanne died, we sat as a family in mourning. We talked about her spirit. Her resilience. Her fight. The warrior she was and the inspiration she gave to so many (even those fighting their own cancer battles). One thing we all agreed on: she was little, but she was fierce.

Her ferocity was demonstrated in the way she loved and the way she chose to face her fight with cancer. Suzanne was never an angry person. She was never vindictive or mean. But if she felt threatened, or if someone threatened our girls… WATCH OUT!

Suzanne was from Northern England. There is a fighting spirit, a resilience, and a way of looking at the world that is uniquely British. And for those from the north, it’s even more pronounced.

In the days that followed Suzanne’s death, we pondered. What would she come back to us as, if her spirit was to show itself.

A hummingbird. Have you ever sat and watched them? I have. For hours. And I love their elegance, beauty and ferocity.

They are little. But they are truly fierce and they will defend themselves and their mates from all others. That was Suzanne.

After we had discussed that this was the most likely being that she would become, my niece painted a small hummingbird on a canvas and gave it to me. It hangs next to two other works that have either been gifted to or purchased by me. 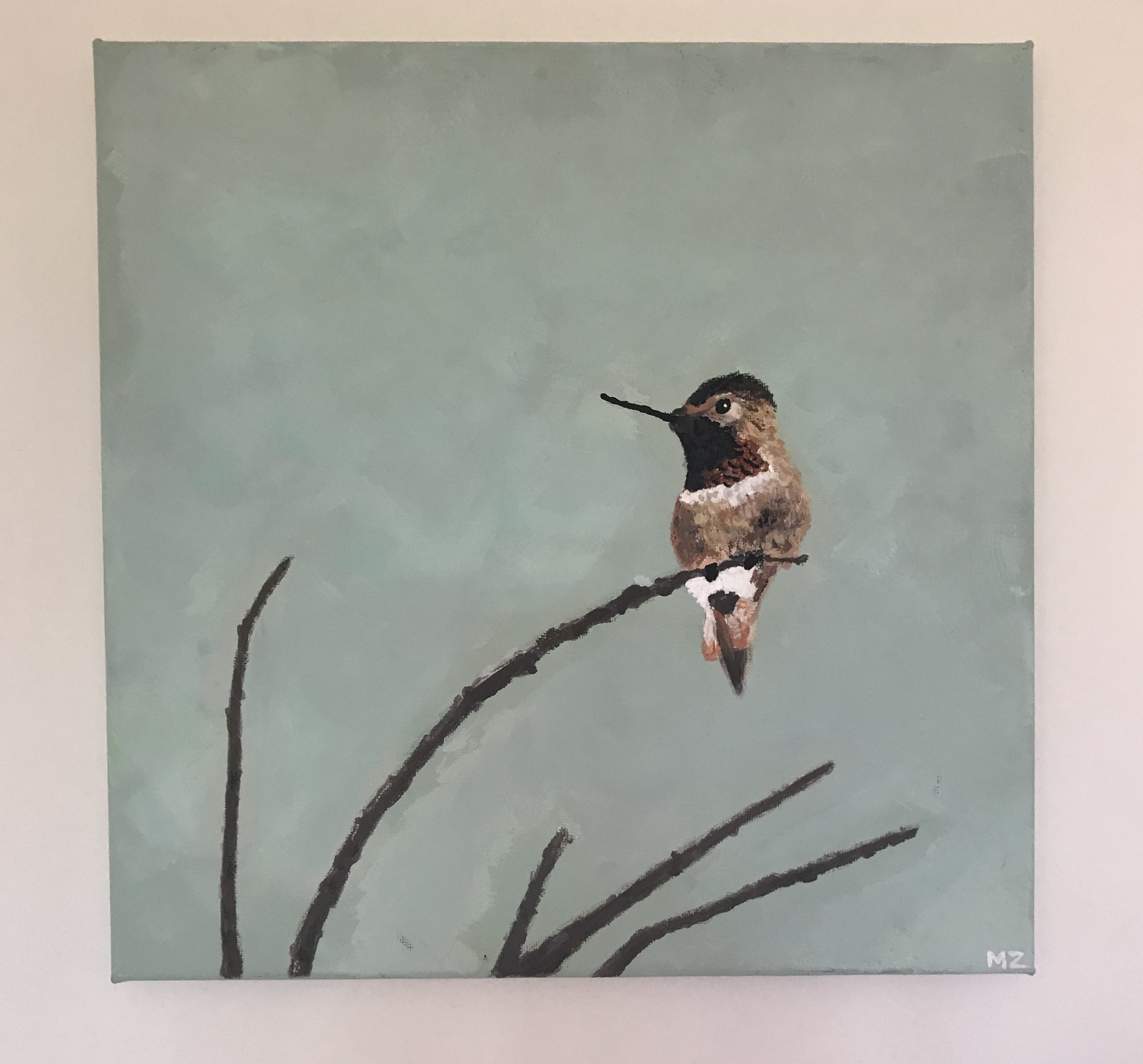 “Though she be but little, she is fierce.”

At the house Suzanne and I shared here in Fallbrook, before I reticently moved in August, we had a hammock chair hanging outside our master bedroom on the porch outside. In the days and weeks immediately after she died, I spent hours sitting in that chair, weeping and lamenting the loss we had all suffered.

Above the hammock chair was a hummingbird feeder. Around a week after she died, I first saw her. She was a female hummingbird, lacking the brightly colored red and green plumage of the local male variety. She was on the feeder one morning.

She was back the next morning, too. And the morning after that. And after that. For almost a year, day in and day out, as long as there was nectar in the feeder, she would be there. And then she stopped coming. Until the few weeks before I moved, and she was there again.

In August 2019, one year and 4 days after Suzanne died, I moved into my new house. I put up three hummingbird feeders. And since then, a female has fiercely defended the one outside the kitchen. She has been there every day since I moved. I now have three hummingbird paintings on or near my fireplace. The one above, painted by my niece, and these two (one painted by a very dear friend of the family, the other from an artist in Encinitas). 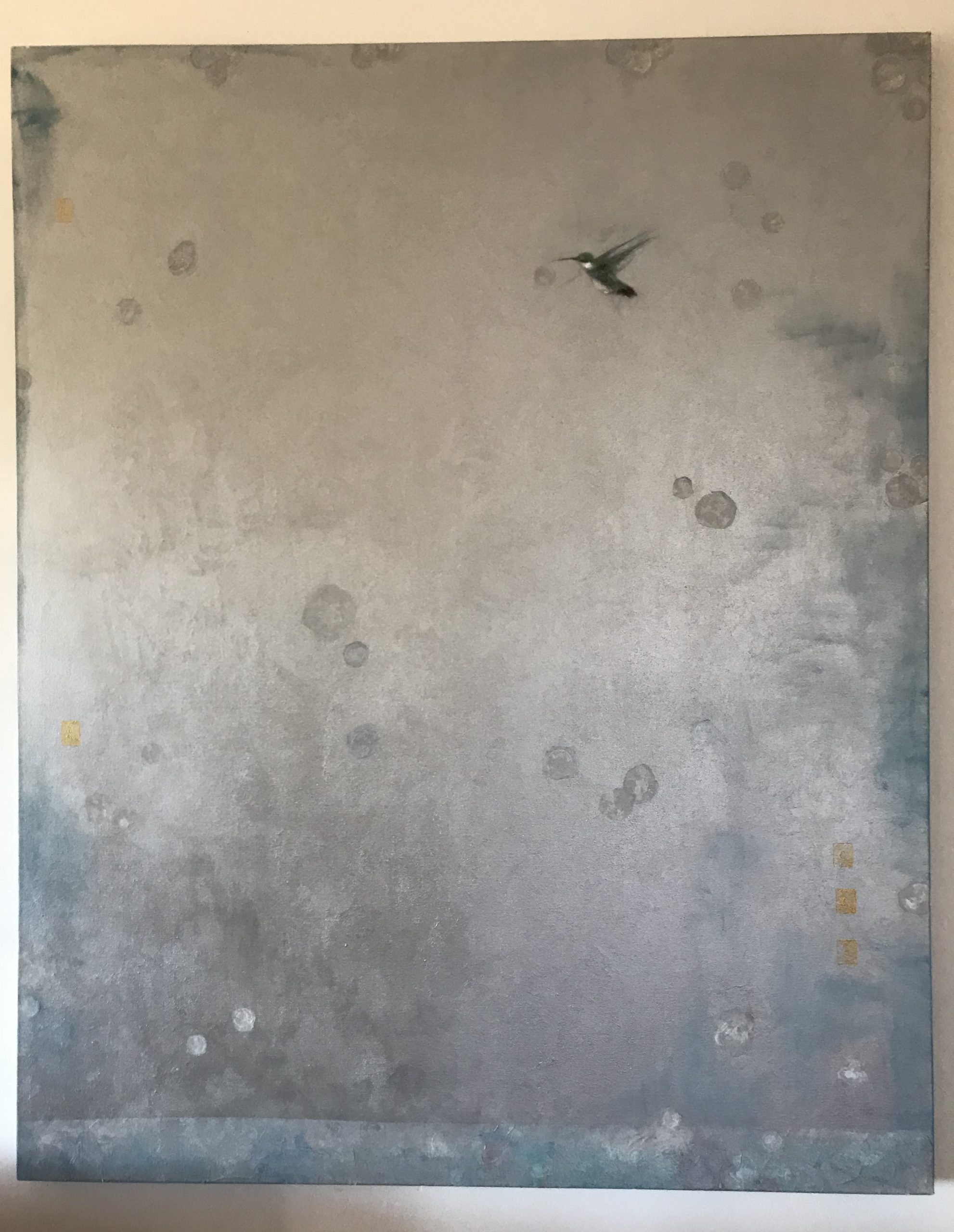 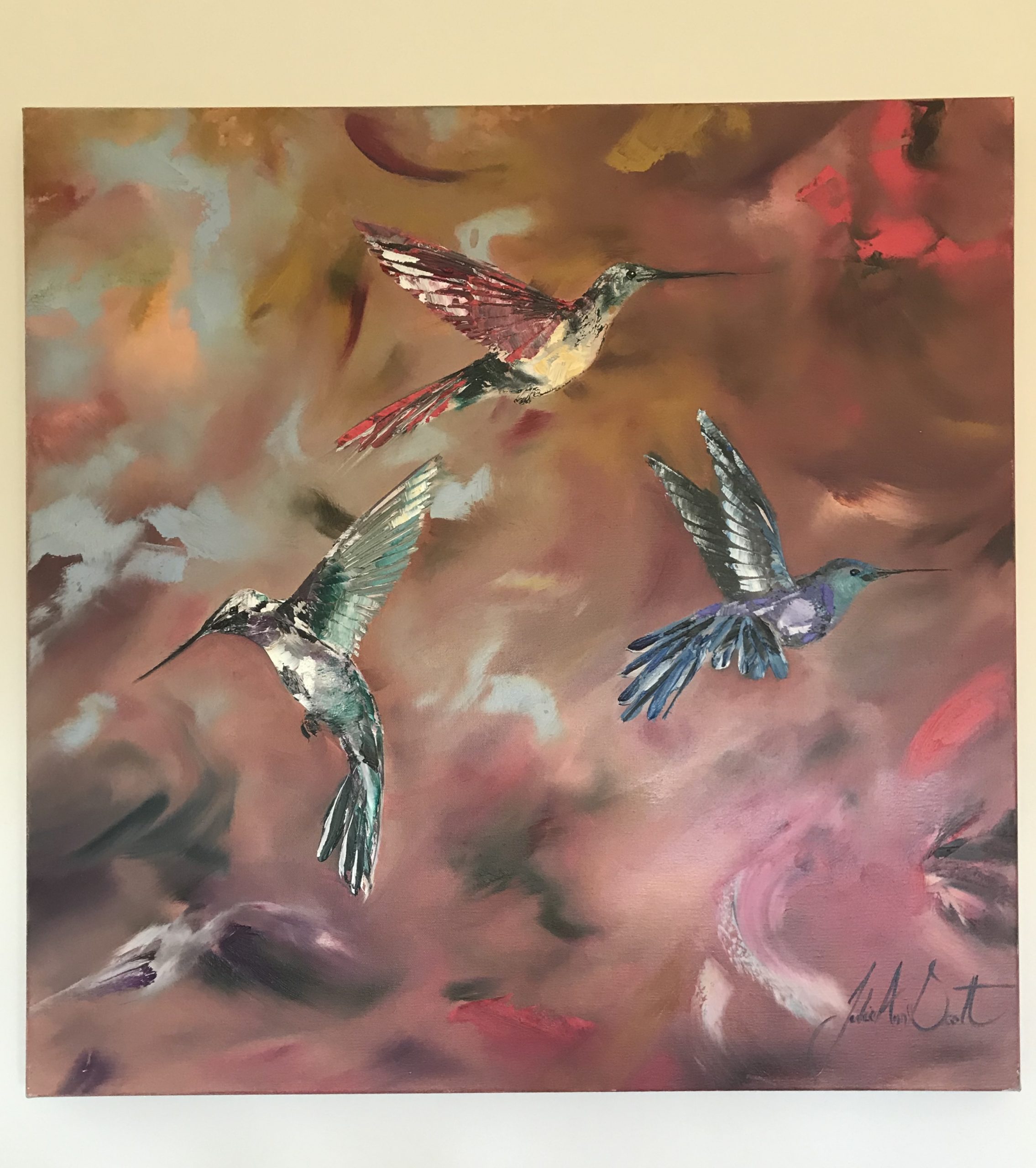 In some ways, I struggle to accept that she would come back in spirit as a hummingbird. But the girls and I cling to that idea because we know how beautiful, yet fierce these creatures are. And for that reason, we are comforted in our belief.

She would always be around to defend the girls. To love them fiercely. To love me fiercely. No matter how small her energy is now, she is still a part of us. Part of us all. We miss her fiercely. But she will always be with us.