This post is actually about another chapter of my grief story… the chapter about my dad. But I’m certain that it’s something that will relate to a lot of widows, too, because it touches on a really hard subject… GUILT.

While cleaning up the basement the other day, I came across a stack of old greeting cards. I’d known they were there – congratulatory words from many family and friends from back when I graduated college. There was one card I hadn’t realized was in the stack though. As I went through and read them all, one unfamiliar card caught my eye. I opened it, and instantly recognized the handwriting to be my dad’s unique style of very messy cursive. It was short, as he was a man of few sentimental words… but it said “I’m very proud of you”. And with that, I burst into tears.

I sat there, alone on the cold cement basement floor and cried my eyes out… not only because I miss him, but also because of the guilt.

My dad battled depression and alcoholism all of his life. There were some longer periods of sobriety, but from the time I was around 17 on, he fell back into drinking pretty hard. So the dad I’d had before that, who was sober and funny and fun to be around, sort of disappeared around the time I went in to college. By the time that college graduation came around, we weren’t talking often. It was a complex relationship and I didn’t know how to deal with it. I had forgiven him for a lot, but I wasn’t willing to let him back in really, so our relationship was mostly distant with a few phonecalls and visits sprinkled in sparingly.

I will never know if that was the right decision. All I know is that I have felt guilty for almost a decade since because I simply never even attempted to have more of a relationship with him in his final years. There WAS an enormous love there between us. He adored me to no end and I did adore him too. But I just couldn’t handle the combination of his drinking and his getting closer to death. I think more than anything, I was just so scared shitless about him dying that I can away from it. After losing my mom as a child, I did not know how to cope with being an orphan at 25, and I didn’t have the tools to cope in a healthy way.

As a result, I left him very very alone in his final few years… in a retirement facility he was unhappy in and felt very alone in. Instead of being there for him in his last year, and last months, as his health slowly failed and his body slowly faded, I just kept on living my life and running away. I know now, I didn’t know what to do. But I know that – at the time – I was very aware I was making poor decisions. I just didn’t realize how much I would regret them later.

As I read those few words in the card “I’m very proud of you”, all the emotions and all of the memories of that time period came flooding back in full detail…

And all of the guilt for how I turned a blind eye to my own dad, who sacrificed so much for me as a single dad. Logically, I do know, I was dealing with a lot, I was so young, and I didn’t know how to handle it. But that doesn’t change the fact that I wish I had done it differently. And even though I have been able to begin to lift that weight and release myself of guilt more in the past few years, when a landmine like that hits, I still feel it full force.

So I had a good, hard cry about the card, and then I tried to distract myself the rest of the day from it whenever it would pop into my head. I even felt bad about that at first, like I was just trying to shove it away yet again. And then I had a chat with a friend of mine, who helped me see it differently. She said:

“Well, maybe you aren’t running from it, so much as you are deciding that you are not going to go on all day allowing yourself to make you feel bad over it. Maybe, you’re getting to a place where you can finally protect yourself from the guilt and say – ‘hey, self, what’s done is done, and we’re not feeling bad over things we can’t change anymore!’ “  It was a bit of a revelation for me, I think she was right.

Suddenly I did feel lighter. And she reminded me I’m not shutting off from him, or from the love I have for him, instead I’m learning to seperate my love for him and that guilt. And that makes sense, because in the past few years I’ve felt I’ve been able to stop myself from falling into the guilt, and I have felt actually much more closely connected to my dad’s presence than ever before.

It’s an interesting thing, when you have dysfunction in a family. It creates a lot of mess. A lot of guilt. A lot of confusion. A lot of mistrust. Whether it’s your father or a sibling or a spouse or a child or a friend, it truly does wreak havoc on everyone involved… and it continues to do so even when those people die. In fact, I’ve spent more time processing his affect on my life since he died than I ever did while he was living. And I know I’m not the only one out there with a complicated love story. A complicated relationship with someone who has now died, and you often times feel like it’s unfair that you are left to process all of that complicated stuff when they died and are now “off the hook”. And yes it feels bad to say that, but yes, its true. For a time, there is resentment that you’re left to deal with that whirlwind of dysfunctional stuff on your own. And it definitely sucks to have to slog through all of that mess solo.

There was a time when I didn’t believe I would ever be able to think of my dad and only feel love. For years after he died, I just tried not to think about him at all, because it was so painful. On most days now though, when I don’t find a landmine in the basement, I can think of him and feel all the love in my heart and none of the rest of it anymore. It happened very gradually, with the help of counselors and Children of Alcoholics groups. Suddenly a few years ago I looked up and realized, wow, thinking of him feels like love now. Not love AND shame. Or love AND guilt. Or love AND anger/sadness. Just… LOVE. I didn’t even know that was possible… and I’m not even sure exactly how I ended up there, but eventually it seemed that the negative parts of our relationship – the human parts – were no longer ruling my love anymore. Now, 10 long years after his death, the human aspects have mostly fallen away. And I suppose what is left is the pure, unconditional, Spiritual Love. A kind of love that I could unfortunately never share with him while he was living, but that I get to share with him now and each day forward. I suppose that is the best gift either of us could be given.

Guilt is a difficult thing, and I think we can only let go of it when we are ready to. I think, sometimes, that we have to grow into new people ourselves to realize that we no longer deserve all that guilt and that it doesn’t serve anything. I think as I have grown on my widowed journey, this new person I’ve become has new eyes, and she looks at the guilt and says, “Nope, we’re not messing around with any of that. We’ve got things to do. We’re awesome. And our dad is right here in spirit cheering us along! Guilt not needed!” With that new voice inside me, I’ve started to see that there is a different relationship that I can have with him now… one that has something of the purity of this – my favorite – photo of us…

that, is the love that is left when all the mess gets stripped away. 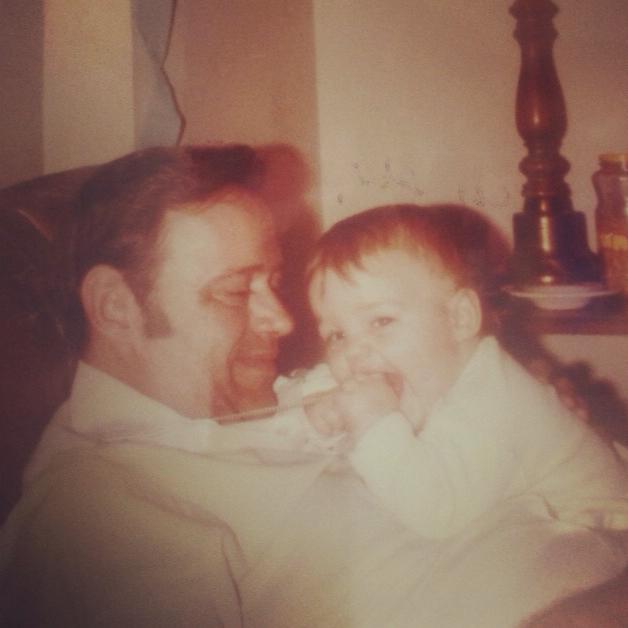