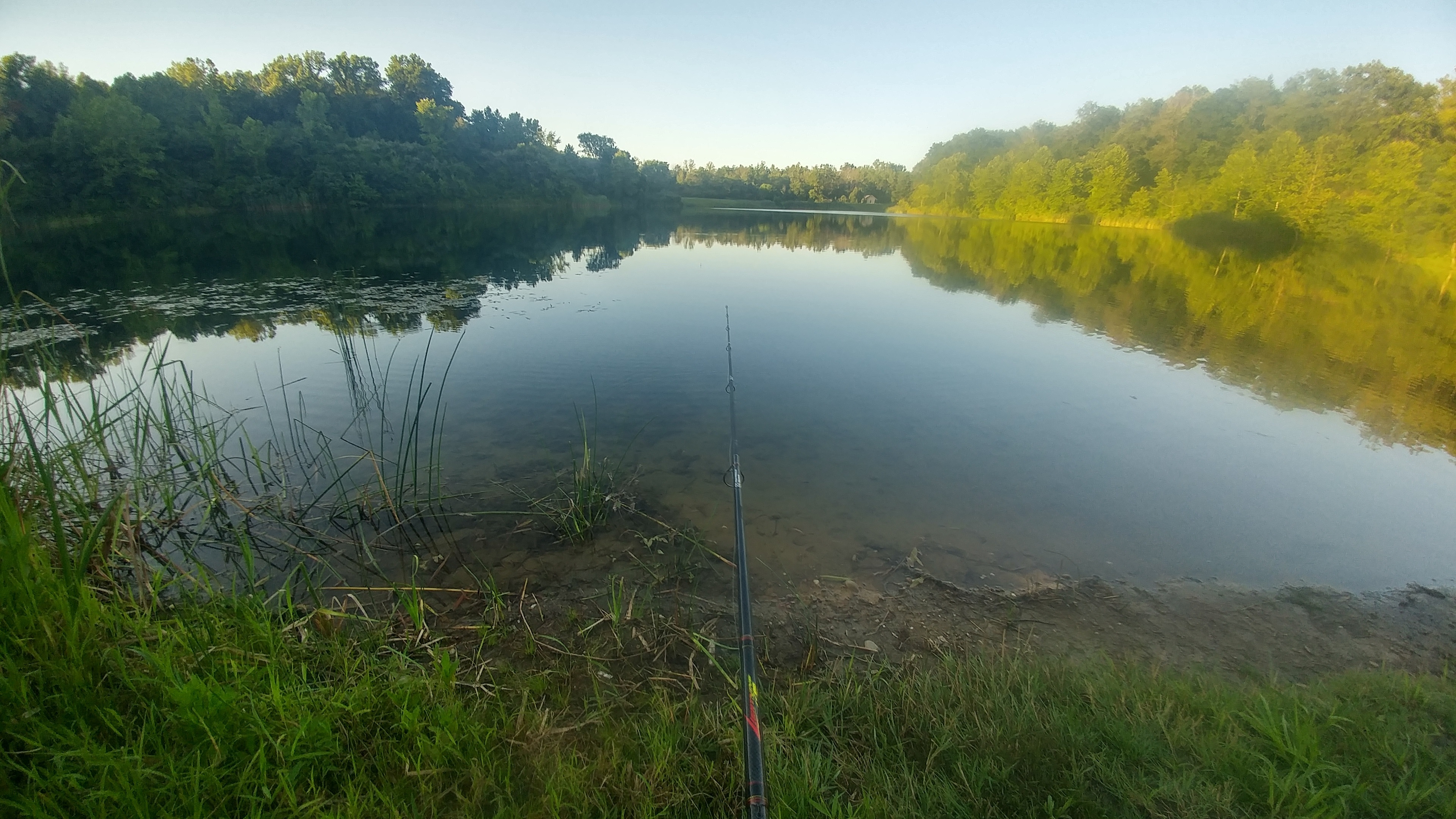 It’s been almost three years since I last went fishing.  THREE years.  I couldn’t tell you all of the exact reasons why that’s the case, but I have some strong theories.  There is the obvious period of time in there when Megan went into rejection, was admitted to the hospital, and ultimately lost her fight. It was the farthest thing from my mind.  There have been a few Ohio winters keeping me indoors in that time span also, but that only adds up to a year and a half in total.

I did not drop a line in the water last year at all.  I didn’t even get my fishing license.  I was still grieving Megan, certainly, and Sarah and I met and became a couple over the spring and summer.  She moved here in fall.  But that still doesn’t explain why i did not take a few hours, a few worms, and a fishing pole to any one of the hundreds of lakes, ponds, and streams within a 20 minute drive of here, at least once.

As I write this though, the scent of insect repellent is all over me.  My hands are grimy and have a rich bouquet of bluegill, worms, and pond water emanating from them.  I’ve got a few nagging itches from either a plant i came in contact with, or a bug that decided to have a taste. A few tiny pinholes in my index finger make it slightly uncomfortable to type, as well as remind me that I should be a little less clumsy when baiting my hook.

In general, Megan encouraged me to head out into nature once in awhile.  It gave her “girl time” with Shelby, and I always felt rejuvenated upon my return.  Make no mistake, I felt guilty when I would leave her alone and go “off the grid”.  I always feared the worst: that something health-related would happen while I was out-of-pocket, and I would be unreachable or three miles away from the car on the banks of some backwater.  I evolved into being more comfortable with it over time though.  Megan’s encouragement, coupled with ten years of on-again, off-again hospital stays allowed me to take time to camp, backpack, or fish every so often without too much trepidation.

When her rejection was diagnosed though, that all stopped.  It was literally non-existent in my mind, crowded out by prescriptions, doctor’s appointments, and the oxygen levels in her blood.  For those 10 months, my mind was clear, and sharply focused on every breath she took.

So when she died, suddenly every thought that had been suppressed came flooding back in.  Nature and the outdoors were still overwhelmed by grief and anxiety.  Over some time, those emotions and thoughts tempered, and the focus shifted more to Shelby.  Meeting Sarah meant that last summer was basically spent between work, home, and Skype.

I still hadn’t went fishing.  It wasn’t until a few weeks ago that I actually had the desire resurface in my head.  Once that happened, I was quick to get my license, register the kayaks, and ensure my gear was still in working order.  It was surprising how quickly it went from no thoughts of it to being on-deck and ready to go.

So I went.  Finally, I went fishing.  The past few weeks have been stressful, to say the least.  With Sarah’s workshop and moving in, Shelby’s summer break and the near-constant comings and goings to grandparents, my work being busy, and a million other things, by this past Sunday night, I was becoming overwhelmed.  Fishing was starting to fade back into the shadows of my brain.

But then, the planets somehow aligned.  Sarah had to spend the evening hanging prints of her photography at a local hospital.  Shelby happened to be spending the night at Megan’s father’s house.  There wasn’t any pressing housework or running around that needed to be done.  I was going to be by myself, and frankly, bored.

So I loaded my fishing pole and tackle box in the car after work.  I stopped and grabbed some worms, and headed towards a lake nearby, in Cuyahoga Valley National Park.  As I drove, all the stress of being just plain-old busy started to simmer down.  My mind began to quiet, and a single focus emerged…catching a fish.

That’s all.  I just wanted to catch one fish.  I parked the car, grabbed my pole, and hiked through the woods to a random spot along the shore of the lake.  The first cast into the water was a milestone, of sorts.  It is literally something that hadn’t happened for years.  It was like riding a bicycle.  It felt natural, normal, and comfortable, as if I had just done it yesterday.  It was a reminder that I am still here, I am still “me”.  I went fishing without Megan for years before meeting her, and during our 12 years together. It would have felt no different tossing that hook into the water if Megan was still here.

I sat on the bank for a few hours, contemplating…nothing.  Being in nature does that to me.  I observe every bit of minutia about a place, from the trees, to the ripples in the water, to the species of bird darting around, but I don’t contemplate them until after the fact.  I enjoy them and archive those details and metaphors in some section of my brain in draft form, to be reviewed at a later time.  It’s not a “fog”.  It is a “focus” that can’t be broken until I choose to break it.

I chose to break that focus as the sun began to set, but I just as easily could have spent the night on that grassy bank.  Loading the car back up and heading home, I finally began processing all of the details, and the meaning behind them.  Not only had I “gone fishin”, but my mind had as well. I realized that, wow, I had no thoughts until I chose to think.  That is not something that is easy for most of us, to keep our mind from spiraling.  Fishing, for me, makes it effortless.

For those few hours, I wasn’t a widower.  I wasn’t a father, boyfriend, IT manager, son, brother, or uncle. 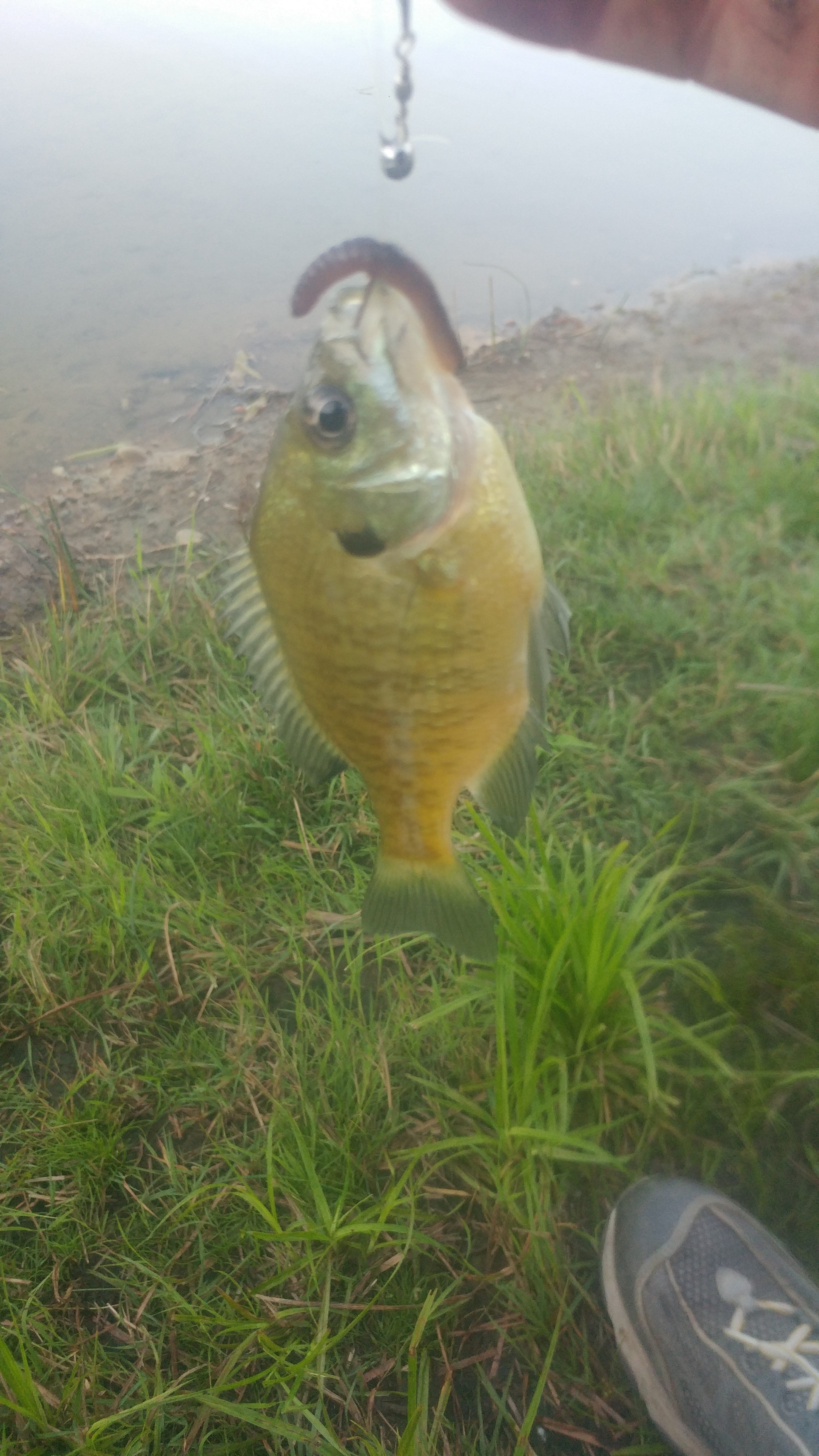