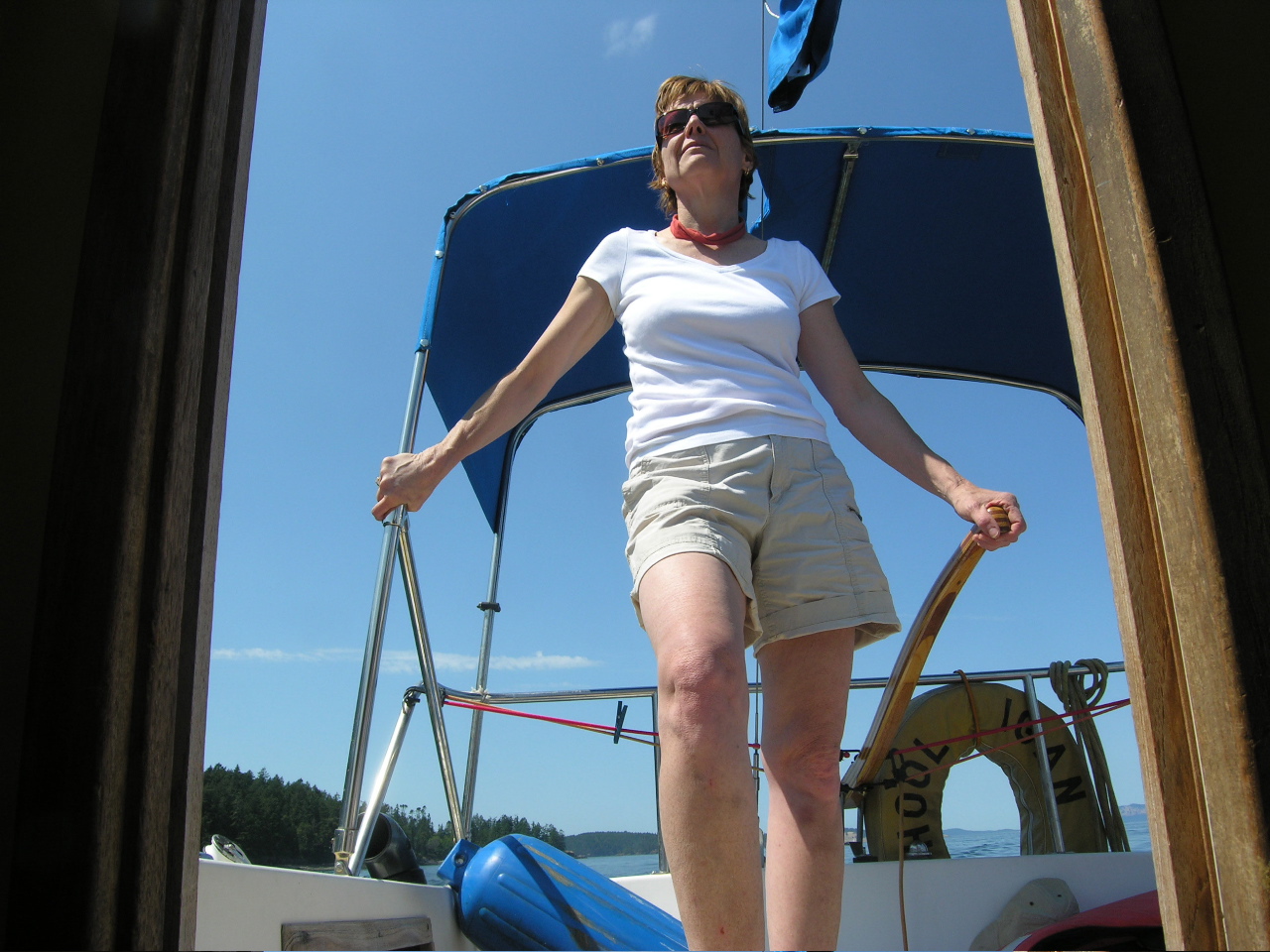 Yep – that’s me at the steering thingy, getting ready to park the boat. I mean moor it or anchor it or whatever it was that we were doing.

Anyhow, it finally happened. Our first fight. On the boat. Our first honest-to-goodness fight. After it was over, and we had both listened, (at least I think I listened), I said to him “Wasn’t that great? We had our first fight!”

Anyhow, it finally happened. Our first fight. On the boat. Our first honest-to-goodness fight. After it was over, and we had both listened, (at least I think I listened), I said to him “Wasn’t that great? We had our first fight!”

He looked at me like I was from Neptune, rolled his eyes, shook his head a little and squeezed my hand. He loves me.

My man has no idea what a real, fair, argument means to me, an argument where we don’t injure each other, an argument during which we get mad, state our case, talk and listen. As far as I am concerned, it is OK that he doesn’t know. But I know.

This is how it went. He was wrong and I was right. (Of course!)

We were on the boat and…. for those of who whose husband had a boat, I am sure you already know the story… a man and his boat, and all…

Before we even went on this trip he promised “whatever goes wrong on the boat, I promise right now it is not your fault. No matter what I say when it happens.” Hmmmm.  So you know already he has a certain amount of self-awareness. And he understands that on his boat he is a changed man.

Now deep down, I am a make-love-not-war kind of person. I will do anything to keep the peace. Or at least that used to be me. I didn’t fight when I was married because Mike was trying to stay alive and to argue with him felt like hitting a man when he was down.

So, sometimes, I wish I had done it differently in my marriage…I wish that I had dug in with Mike and fought just a little. I wish that I had been willing to risk more for the sake of intimacy. But I also understand why I didn’t.

I was at Quaker Meeting about six months ago and an elder spoke about her belief that our loved ones continue to mature after they die just like we do here on earth. I would like to think that this is true and that as I grow in understanding and compassion for Mike and I, and our marriage, so does he. I feel, somehow, that this might be true.

It has been almost 9 years and strange as it sounds even to me, I feel even closer to Mike now than I did right after he died, like he might be loving me and cheering me on as I learn the lessons I missed with him.