Last Monday was just an average day. I had some running around to do and appointments to attend. A pre Vegas hair colour, a dentist appointment… that sort of thing. Nothing too crazy or anxiety inducing, and the panic I tend to experience on the daily remained at a reasonable low for the most part.

I ended the day by attending a relaxing yoga class with a friend of mine. It was exactly what I needed to wind down and I was well on my way to feeling the zen when, for no reason at all, a most unwelcome memory popped into my mind.

The memory was of a text Ben sent me from the hospital shortly before he died. Death was inevitable and it coming fast, and every moment felt like we were staring down the barrel of a shotgun. I had spent the entire day with him and had gone home in the middle of the night to be with the kids and make sure they were safe. I crawled into bed, texted Ben “I love you” and he texted back saying “I don’t want to die.  I have so much to live for.”

At that moment I felt as though my heart had been ripped out of my chest and thrown across the room. I texted back and told him that I didn’t want him to die, but i did not say “You aren’t going to die.” To deny his pending death seemed wrong to me. It just seemed so dismissive to say “oh, don’t be silly…you aren’t going to die.” He was indeed going to die.  So many people had spent the nine months after his diagnosis in denial, and that had angered me to no end. There was nothing helpful about denying what was to come, because denial has not been proven to be an effective method of curing cancer. So instead I told him that he was leaving a legacy in his three kids. And he responded that “legacy or not” he still didn’t want to die, he wanted to fight. He didn’t want to die. 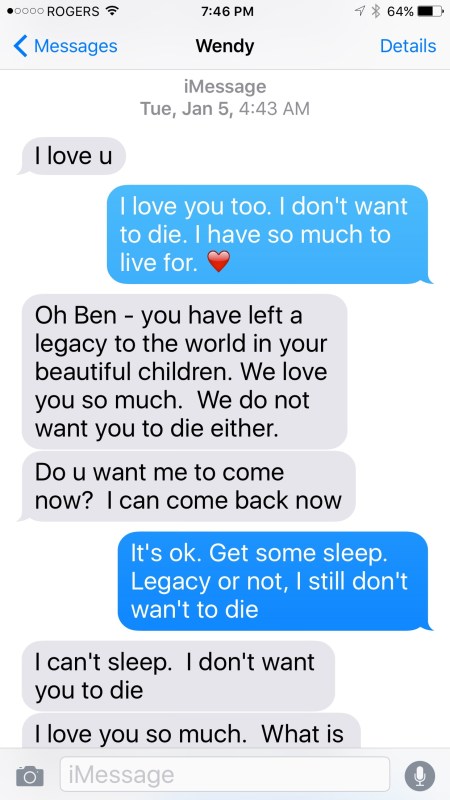 Ben died eight days later, and my mind still cannot fathom how we could be texting on January 5th and he was dead on the 13th.

And oh my God, that moment in time is one of the most agonizing memories I have. It will never leave me. It is burned into my memory permanently and will remain there until the day I die. Maybe longer. It is nothing short of torturous to remember that My Ben lay in the hospital not wanting to die and when he told me, I couldn’t help him. I look back on that text now and think “what the fuck was I thinking?” Why didn’t I go back? Why didn’t I crawl into that hospital bed with him, wrap my arms around him and tell him I didn’t want him to die? Beg him to please not leave me?

I know why. The inevitability of his death had become my norm. I was exhausted. Achingly exhausted. It was 4:43 am and I had been with him all day and half the night. I had kids at home that needed to be cared for, and my body cried out for sleep. I was so fucking tired. But none of that matters. It doesn’t matter how tired I was, or how much I was needed at home. All that matters is that I did not go back to him in that moment. I offered to but he said “no” and so I didn’t. How could I not go back? How could I leave him all alone with those thoughts? I would NEVER want to be alone with those thoughts, that fear, that pain. All alone in the hospital.

I hate myself when I recall that night, and those are the types of thoughts and memories that invade my mind space at the most inconvenient of times. For anyone who believes that “time heals all wounds,” you should know that is far from the truth. As long as you have the ability to remember, not even time can heal a pain so great. I don’t go seeking those particularly painful memories, but they come and find me at the most inopportune moments and they take my breath away. They make me cry. They make me feel like it is happening all over again. They make me feel like a terrible wife, and a less than adequate human. They make me want a do over. I want a do over.

When we left yoga on Monday night we pulled out of the parking lot and a song that Ben and I used to listen to almost 25 years ago came on the radio. “Don’t Take The Girl” by Tim McGraw. 1994. I remember listening to it with him 100 times, and then we stopped listening to country music and I’m pretty sure I’ve never heard it since. And there it was, suddenly playing on the radio in 2017 and I was transported right back to 1994. Back to when Ben was a boy, and I was a girl, and our lives stretched out endlessly before us.

Now it’s 2017 and the girl wasn’t taken but the boy was. I miss that boy, and the memories hurt me and haunt me. His pain ended, but mine did not.

I am finishing this blog post on a flight home from Vegas, and I feel that familiar panic coming over me. It is taking every ounce of my strength to not scream out loud that Ben Saint-Onge once existed and that he didn’t want to die. I want to feel Ben’s calming presence and I want to hear his voice talk me down from this ledge, but instead I am alone on this plane beside a stranger taking up too much of my breathing room, trying to calm myself.

I didn’t want that boy to be taken. I want him back.