Here in the North East, most public schools began their fall sessions this week.
My sister, a first grade teacher, told me in an email that never in her life had she heard so much crying, five and six year olds being asked to leave their parents, many for the first time. According to my sister, “The sound of sobbing was everywhere.” 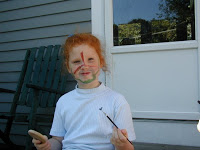 I thought about Anneke’s first day of school eleven years ago, the cafeteria where nervous parents and progeny gathered, and how the only person sobbing out of the approximately two hundred and fifty assembled, was Yours Truly.

That’s right. I was bereft and with shoulders heaving, I understood that although I was clearly the oldest parent in the group, I was not the coolest, nor the most mature and I understood that any attempt at pretending otherwise, would be in vain. Sadness overwhelmed. Leaving my daughter for her first day of kindergarten, I was most definitely not at my best.

Yesterday, my partner asked me what I thought I was sad about, way back then. “Why missing Anneke, of course”, was my easy answer.

But when I thought further, I realized that it was much, much more. Mike was struggling with back pain that had turned out to be a metastases and a large lump on his temple had also turned out to be cancer. Three weeks later he would have a stroke that would temporarily rob him of the ability to speak.

The potential of loss surrounded us. Did I know that I would lose him in 2 years? Maybe. Deep down, probably I did.

My daughter sometimes tells me that she is sad “for no reason.”

We are never sad “for no reason”. Ever.

Eleven years ago, leaving my daughters kindergarten, I felt embarrassment. If the same thing were to happen today, I hope that I would feel more understanding and compassion for myself. I believe that I would.