Lee kept her wedding box at the top of her closet, which I had been in the process of reclaiming from her when I found it. I say her wedding box because she was not keeping it for our mutual benefit. I did not know it existed.

I opened the lid and looked inside the box. The first thing I noticed was that the contents of the box had been arranged and organized as I would expect of someone as precise and organized as Lee. I was looking at a familiar signature.

Overall, the contents did not seem remarkable. I see Lee’s handwritten notes with details about the downtown hotel and room she had selected for the wedding, the wedding suite, overnight guest accommodations, appetizers, menu options and so forth. The box contained numerous fancy little cards with raised print, some with little envelops, which turn out to be regrets” from old aunts and out-of-towners unable to attend but invariably including a kind handwritten note addressed to Lee. However, there are many more congratulatory cards with the names of people I do not recognize, but from the return addresses deduce must have been friends of Lee’s folks. These people would have remembered Lee growing up in the small resort town on Lake Michigan that she called home.

The wedding box contains a keepsake, a torn piece of black fabric that might have held together a wedding bouquet.
There is a selection of original color photographs, not the full array contained in our wedding album, mind you, which includes a fair number of photos I have never seen. I am left to ponder why these made the cut and end up inside the wedding box.

Lee had planned and organized our wedding without much outside help. I always chalked this up to the fact that, unlike me, she was never previously married. Though we had been in love for many years by then, she was middle-aged and fully formed when we made it official in front of 40 or so family members and close friends. Among the three weddings I have experienced as a groom, it’s my clear favorite. A real celebration: people mingling and laughing, sharing stories, hugging, eating, and drinking, dancing, 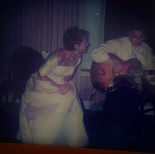 playing music, multi-generational, with little regard for whose side of the family they belonged to when they came into the room. Lee had this way of bringing folks together.

I come across a photo of Lee hugging my dad, who looks like he might have been crying. This is understandable to me because I know his wife of nearly 60 years –my mom—had passed away only 6 months earlier following a long illness. I am not sure whether her death left my father the sentimental soul that I remember today or whether I simply never noticed this facet of his personality until I was an older man. In any case, my dad loved Lee, whose kindness helped him soothe his sentimental tears on many remembrance occasions for the remainder of his long and well lived life. 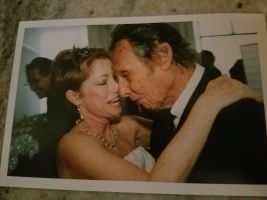 On the other hand, Mom was not sentimental in the least. She had many positive traits but could be harsh; indeed, a rough ride if she put her mind to it. However, early on in my relationship with Lee, long before they got to know one another, I heard my mother bluntly observe that this new girl, “really loves you.” Coming from somebody like Mom, who could not help from being judgmental, this statement amounted to her personal seal of approval, something I do not recall ever hearing her utter when it came to my other wives. And it was no secret within our small family that I was my mom’s favorite. Whether this was the case because I was the youngest child or because I was the only son or because we just happened to share the same birthdate, I cannot say, and today there is no one left who can tell me. All I know is that shortly before my mother passed, she had insisted that I take her wedding ring and use it to help make Lee’s wedding ring.

Lee’s parents were both still alive when we married, although it tuned out that her dad did not have much more time. As I have mentioned before, Lee was a tiny person, even smaller than her diminutive mother, whereas her father was a tall, strapping man, whose two surviving sons both stand 6’3”. In old black and white photos, he appears a handsome man, who Lee and her brothers have told me had once liked to box. In his youth he had earned a reputation around town as something of a scrapper. Unfortunately, when we first met, he was already reduced physically due to COPD. He suffered from painful neuropathy, too, so that by the date of the wedding he mainly was confined to a wheelchair, and unable to stand up without assistance, yet had stubbornly insisted on standing to give me the hand of his only daughter.

The box contains a few candid photos of Lee with her folks in preparation for this ceremony. There is one of Lee and her father that I find remarkable because it captures their obvious delight merely in being in each other’s presence. In a photo, Lee is fairly beaming while standing next to him seated in his wheelchair, her tiny hand on his broad shoulder as she looks over it to study a photograph that he is holding. Lee’s folks were old fashioned types and I suspect there was some consternation at times as they privately wondered if their only daughter would ever marry. I do know that the fact her father was not only present but able to participate in her wedding was one of Lee’s happiest memories from a wonderful day.

The box also contains a couple of cards from Lee to me. One of the cards, which she gave to me on our wedding day begins, “When time has stolen away our stars and only the night endures, yet somewhere in the darkness love, my hand will still seek yours.” Now I am a cynical guy by nature. Under ordinary circumstances I might ridicule such words as so much Hallmark cheese, but now, being a new widower myself, they feel immediate to me, and are poignant. I can suddenly taste warm, unbidden tears and instinctively turn my head to protect the contents of the wedding box. This card has a few more stanzas that I do not recall, and which are not relevant here, then concludes with a standard, “I will love you…always.”

However, below, at the bottom, is Lee’s inscription: “That’s a promise that will be easy to keep. You’re my one and only love.” And, despite the tears, I feel happy because in my heart and soul I knew she meant every word. 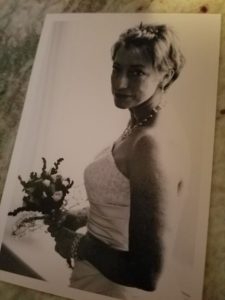