I used to think I was such an emotional tough guy. It is true, of course, that I had sobbed in my bed like a baby on the night my grandmother died, after displaying what I thought had been laudable stoicism upon learning the news of her death earlier that day. I was eight years old, and my grandmother had been one of my favorite people in the world. Admittedly, it was a smaller world back at the time. I saw her nearly every day after school. She always could be counted upon to offer my friends and I healthy after-school snacks. To this day, I enjoy gentle rubs because I still remember that is how she used to rub me, sometimes while softly cooing the old tune, “Tura Lura Lura (that’s An Irish Lullaby).”

Admittedly, at various times throughout my life, my heart strings occasionally were manipulated by marketers or other external forces. Seriously, would anyone believe you if you claimed today that you had not shed a tear or two during a showing of the movie “Old Yeller”?

Yet, with a few exceptions, before Lee became sick and died, I certainly was not a person who shed tears easily. This trait extended to such universally sad events as the death of a parent. For the record, I loved my parents dearly while they were still alive. I also am not claiming that I cry at the drop of a handkerchief nowadays, but the truth is that I do cry more often, and with less provocation, today than at any previous time in my life that I can recall.

***
I came across a short promotional piece on the internet, appearing under the auspices of the Society for Personality and Social Psychology, which suggested that it remains “a hotly debated topic” among researchers whether one’s ability to be in tune with other people’s feelings and perspectives –what we commonly refer to as empathy—ever changes, and if so, how. It turns out this presents is a complex question for social scientists.

You might think that as a mature adult your ability to control or manage your feelings is superior to that of a younger person. Yet, contrary to the common assumption that the ability to control one’s feeling increases with age and maturity, Dr. Rebecca Ready observes that “bad events may hit older adults harder than younger ones.” See “Aging and Emotions,” Psychology Today (posted August 29, 2012).

For me, the current holiday season presents a case in point. Rather than sad personal memories, it has been an odd assortment of entertainment and musical vehicles, including some that were downright cheesy, causing warm, salty tears to run down my cheeks, suddenly, and without warning.

This past Sunday, as Robyn dozed on the couch, I decided to watch a few minutes of the latest film version of Dicken’s classic tale of redemption: A Christmas Carol (originally entitled in print A Christmas Carol in Prose, Being a Ghost Story of Christmas.) This film version, which had actor Guy Pearce cast in the role of Ebenezer Scrooge, is a bleaker and much harder retelling of the tale than most other versions that I have seen– and there have been many produced over the years, at least as far back as 1951 when Alastair Sim originated the role of Scrooge in film.

The movie was nearly finished when Robyn awoke to ask what I was watching on television. To my surprise, I learned she has never seen any film or television version of A Christmas Carol and, in fact, that she was completely unfamiliar with Dicken’s story. However, as I tried to explain the action to her, I found that I suddenly felt overcome with emotion in the telling. As I endeavored to provide a synopsis of the action, I was sputtering and stammering. My voice did not sound to my ears like my own voice, but rather sounded higher pitched and quavering with emotion. I could feel tears welling up in my eyes, and I looked away, hoping that Robyn would not notice. Fortunately, since I had been under the weather in the days leading up to Christmas, and I am confident she did not catch me being on the verge of tears. All in all, I felt slightly embarrassed. I couldn’t say why I felt so emotional, but the truth is that I was relieved when the film came to its end.

***
I have been thinking about my metamorphosis from tough guy to sentimental slob. How and when did it happen to me?

I do not recall feeling like this before Lee died, but her death was such a significant loss that it is hard for me to fairly assess today how I felt before It. However, I am sure I felt this way before the very recent passing of my sister.

But now with Lorrie gone, and mom and dad, too, I feel a bit like one of Dicken’s orphans. Take your pick –there are so many. 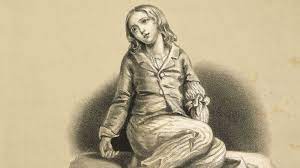 Of course, I remain optimistic about my future. After all, this is simply who I am. At the same time, navigating solo through this wide world is a little bit sadder today than it was just yesterday.