This week I am on a scouting mission to Deer Tick Manor in advance of its unofficial closing on November 29. As I sit down to begin this week’s post, I have not gotten much done today beyond filling my vehicle with “cheap” gas, visiting my neighbors, talking with Robyn a couple times, and baking a potato in anticipation of a dinner that will feature delicious Al’s Supermarket chicken.

About one year ago at this time, I would have been undertaking these same pre-closure rituals. Nonetheless, last year was unique because it was the first that I was closing the place without Lee. As for the neighbors, I have known Deb, and Joe and Mary for many years. While Lee was alive my relationship with them was different because Lee was just naturally neighborly, whereas I am not, and she had far more personal interaction with them than I did.  This said, during the past year I have gotten to know all three well, especially since I added Lola to our mix.

As I sit here watching over the potato –incidentally, in case you’re interested, I employ a longer, hotter bake to prepare my crispy “British” style baked potato—I use this bit of free time simply to ruminate about these relationships. Today, for example, I no sooner arrive than Lola the pup makes a sneaky beeline for Joe, who apparently also just arrived back home after attending a doctor’s appointment with Mary. 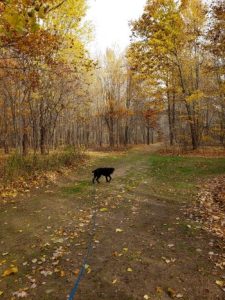 From a distance I observe someone whom I assume to be Joe standing in Joe’s front yard, which is located the better part of a city block to the north. I sigh. Once more I will have to fetch Lola. I know I will end up spending thirty minutes bantering with Mary and Joe and do.

Mary and Joe, and most especially Joe, have huge soft spots for Lola, making them easy marks to succumb to her charms. Mary and Joe are generally fond of animals and have a long history of having pets of various stripes, from dogs to cats to ducks to koi, none more beloved than their aged Golden, who died early last Winter. Naturally, Lola, being a Lab, must remind Joe of his dearly departed canine friend. Despite the fact Lola is now 15 months’ old, she still behaves like a puppy. Today, she predictably acts like she owns the joint, prompting Joe to remark, as usual, that he is sorely tempted by Lola to get a replacement dog of his own. And, as usual, Mary cautions that he is too old to get another dog, though I suspect that she thinks  she is too old to get saddled raising another dog, if anything were to happen to Joe.

Joe and Mary are almost ten years’ older than I. Today, after riding in the car with Joe, Mary complains about her aches and pains. I cannot remember ever hearing her protective Joe  complain similarly, but he probably has his own aches and pains. They live with an adult son, Tony, who works in middle management for Al’s Supermarket, as did his father before him. Mary’s career has been that of a wife and mother.

Word of my arrival travels fast. Later, Deb comes around my place to say hello. She loves Lola, too, but is not a soft touch like Joe. I give Lola, ever persistent and indefatigable, points for trying, however.

Deb’s husband just died this year in late October. When I first met Deb and her husband, and it’s been nearly 18 years, he was a union machinist at a local factory. But shortly thereafter, I learned the factory owners closed shop here to relocate the operation in Juarez, Mexico. For a short time, it seemed that this move might prove to be a good gig for Deb’s husband, who went to Mexico to assist in setting up the new enterprise. His company offered him (and a few other skilled workers) a permanent position, knowing, or certainly hoping, he would turn down the opportunity since he had both a wife and his house with a mortgage here.

Naturally, he declined. And in the end Deb’s husband received a tidy but small severance package and many thanks for his long service to the company. The company’s owners must have been thrilled to drastically reduce labor costs here, including job benefits, while simultaneously drastically increasing their profits by moving abroad to exploit cheap foreign labor.

At the least, I recall Deb’s husband formed bitter feelings when it sank in that he had been poorly used. Despite the excellent, short-term money he realized from his brief travels, he seemed to grasp he had been tasked with digging his own grave, so to speak, by employing his skills to expedite the new factory’s grand opening. More than he realized, I’m afraid, as within a couple years America was in the throes of the Great Recession, and then there was not much gainful employment available for a middle aged, blue collar, and loyal union man.

I do not think that Deb’s husband ever recovered from the experience. It triggered something deep within that left him listless and morose. Emotionally he seemed to surrender to the new reality, emasculated, perhaps, he became increasingly withdrawn, living like a recluse despite sharing a house with a wife. To compound matters, he later sustained serious injuries as the result of an accident involving heavy machinery and thereafter was also physically unable to work.

I understood that he took it out on Deb, who looked for excuses to frequently come by our place.  Deb would vent to Lee about her circumstances over a cocktail. By the time Lee died, I was well familiar with Deb’s unceasing complaints concerning her husband. And after Lee died, Deb frequently came by to vent to me. Sometimes, like today, I offer her a cocktail.

The bottom line is that, over time, Deb’s husband told her in unmistakable terms that he hated her and hoped she would die poor. Despite being 5 years’ younger than I am, he also frequently claimed he was ready to die.  In the end it appears that he possibly willed himself to death.

My observation today is that after long years of suffering such unrelenting mental abuse, Deb is not the least bit sad about her husband’s passing.

In just a couple of days I have managed to complete several necessary preparatory tasks and I take pleasure checking them from my list. I have gathered some items, including the small tube amplifier and patch cord I keep around whenever I feel like cranking up one of my electric guitars (fortunately, Deer Tick is located at the end of the road in the middle of nowhere) for transport home for the Winter. I have compiled a list of supplies I will need to effectively shut down on time.

By nature, I always will manage to work in time for a bit of fun. Lola and I go to our favorite orchard, which also is getting ready to close for the season, to grab some more Honey Crisps. We go for a long walk in a small county park. We drive in the country. The steady fall of colorful leaves seems to increase minute-by-minute.

Soon the trees will all be bare. When I next return to Deer Tick, it will be after Thanksgiving. I expect by then to have a clear view deep into the woods from the vantage point of my great room.  However, I cannot predict whether there will be snow on the ground.

Before I cease my ruminating, I think briefly about Robyn. Due to my scouting mission, I will not see her again until this weekend. It is remarkable to me to consider that one year ago I was not even aware she existed. And now? Well, that is a story for another day.  Right now, it’s time for me to finish preparing my crispy potato and to begin enjoying my chicken dinner!