As a seven-year-old I wrote an essay entitled, “My Old Man,” for a second-grade writing assignment about our fathers, and instantly it had created a furor. Perhaps my teacher thought I was being disrespectful. If so, then she would have been wrong. However, I never received any explanation why she was discomfited.

All I knew is that I was alone, seated in a chair facing the blackboard at the head of class, but well within earshot of my stunned classmates’ murmurs and hushed sniggers. Even with my back turned, I was able to recognize a few of their more distinctive individual voices. I felt exposed and embarrassed. My teacher’s thundering pronouncement that I would remain seated until my parents came to the classroom jarred me.

My essay had contained a smattering of “beatnik” vernacular, language which, back in the late 1950’s, might have been considered “cool” in certain quarters, but it was also full of love for my dad. For example, the opening sentence plainly declared: “My old man is a real cool cat, man.” When my folks eventually showed up, as directed, and were presented the offending piece, to my surprise, rather than being offended, my dad seemed to be irritated with the teacher. He stopped short of dressing her down in front of the entire class, but I guess he managed to convincingly communicate that he was on my side in the dispute because I promptly was restored to my former seat, the furor forevermore quieted.

***
Throughout my rebellious teenage years, things seemed to deteriorate between me and Dad. I understand it is not unusual for an adolescent male to rebel. However, the truth is that I was always stubborn. When I wanted to go my own way, I usually did. If my father drove me to school to make sure that I arrived on time, I might duck out a back door to spend the day bumming cigarettes and shooting pool with the other denizens of Mr. Cue’s billiards parlor. Late night revelries might end with a police escort back home where my dad invariably would be up waiting for me, no matter the hour. I have no doubt that my own words and wayward conduct contributed heavily to our dysfunction.

Yet, despite the daily drama between us and my teenage angst as I attempted to successfully navigate the wasteland, I always understood my father remained firmly in my corner. And, naturally, in the end, the drama stopped. I cannot say precisely when this occurred. Or why. In the big scheme, these questions were not important since I never ceased being my father’s son. For me at least, the important thing is that from that time on we were the best of friends while Dad remained alive. 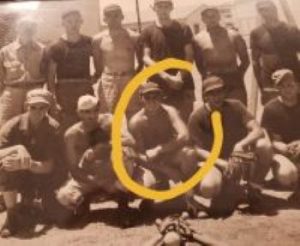 He was an excellent athlete, though he was not a big man. He was a smart fellow, though he was no genius. He worked very hard, though he never became a rich man. Toward the end of his life, he liked to tell me that he was proud of the man that I had become. Now, if I look in a mirror, and see myself aging in the same ways I had seen him age, I realize how much alike we are.

My father devoted himself to my mother for more than fifty years.  During the last ten years of her life, he was her primary caretaker as he watched my mother slowly being worn down from the combined weight of multiple medical problems. 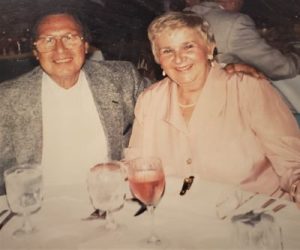 By the time she was gone, he was himself an old man.

When I think of their relationship, I am reminded of Lee’s devastating illnesses. I would like to think that I was as devoted to Lee’s well-being as he was tending to Mom’s needs.  While I miss my wife, I have no regrets that I might have done more to ease her suffering.

Lee doted on my father, whom she would address lovingly by his first name, never as “dad.” He loved and cared about Lee as if she had been his own blood.

My father was extremely fortunate to enjoy excellent physical health nearly his entire life. My dad loved to drive. On his 92nd birthday he made me take him for his driver’s exam, perhaps just to prove the point that he was still capable, whereupon he demonstrated his good sense and mental wherewithal by immediately giving up driving for good for safety reasons.

However, he inevitably showed signs of slippage, and after he turned 95 my sister and I had to move him to a nice independent living facility so we could more closely monitor his day-to-day activities. Looking back, we probably ought to have recognized the signs earlier than we did. At first, he resisted our efforts, but eventually stopped resisting because I believe he understood that he was in rapid decline. A few months after we moved him to the new place for his own well-being, my father sustained a fall inside his small, tidy apartment. He died quietly within a week.

Along with my sister, her husband and two adult children, Lee and I kept vigil, each of us knowing precisely where the matter was headed. Around 3:30 a.m. on a snowy and cold January 2, dad’s nurse shooed everybody home, assuring us that, because she had assisted many terminal patients in her career, she was able to recognize that our father was not ready to depart this mortal coil. She urged us to go home, get some rest, and come back later once it was light outside.

Despite the snow, at this early hour the roads were wide open, so Lee and I found ourselves back home again by 4 a.m., in time to take the nurse’s call informing us that Dad had died. I remember thinking, just like Dad to want to spare his family the awful specter of witnessing the moment of his death.

This past Sunday, December 12, would have been my father’s 100th birthday. He didn’t quite make it but not for any lack of trying. He always gave his best. Like I say, he was my old man and a cool cat. Happy birthday, Daddio.