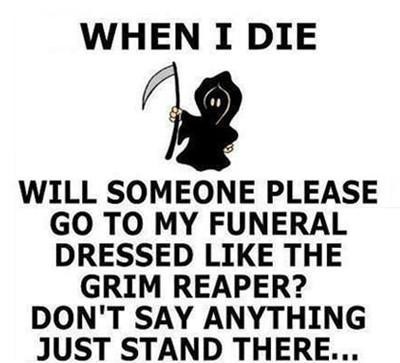 Everyone has their own coping mechanisms when dealing with loss.  Some turn to creative pursuits, creating paintings, books, photos, and sculptures that serve as an outlet for pain and frustration, and a visual representation of hope.  Others become quieter people, spending less time socializing with friends and family, and more time socializing with themselves.  Many of us turn to others that have experienced a similar loss, attending events like Camp Widow and perhaps preferring to isolate themselves with their “tribe”.  There are even those who become self-destructive, turning to the artificial self-medication of the bottle, or worse.

Me?  I turned to morbid humor with just about anyone around.

It was kind of inevitable, really.  I had over a decade to prepare for Megan’s death, and so did she.  She was born in 1982.  At that time, the life expectancy of someone born with CF was roughly 15 years old.  By the time she hit 15, that figure had risen to about 30 years, and it continues to increase, albeit slowly plateauing to around 40 at the current time.

Let me ask you this.  If you “knew” when and how you were going to die, how would you face it?  Megan chose to be humorous about it, and enjoy the time she had.  Of course there were emotional times, when she was truly scared of leaving this earth, but for the most part, she let the chips fall where they may and just had fun.  Even serious conversations, such as her funeral arrangements were tempered with humor.

I vividly remember talking to her in her hospital room in 2010, four years before she died, about her final wishes.  There was the standard “take care of Shelby” and “I would like to be cremated”, immediately followed by “Cremate me, because if not, I’ll come back as a zombie and eat both of your brains”  Mind you, this was not a laughing matter…she was effectively on her deathbed at that time.  She hadn’t received a transplant, she was emaciated and she was struggling to breathe, even with supplemental oxygen.

But, she had an entire lifetime to think about getting to that point.  She saw friends, and even her own brother wither into the state she was in, and ultimately, lose out.  She knew roughly how and when she was going to die, and laughed in the face of it.  It was hard for me to joke about, being on the other end of things.  It isn’t as if she wanted to die or didn’t care, but she decided to cross the bridge when she came to it, and poke playful fun at it as she approached.  I was dreading even seeing the bridge come into sight around the bend.  She almost ran to it, just for the chance to be morbidly humorous.

Inevitably though, we reached the bridge, she fell in the water, became a troll under said bridge, and started haunting Shelby and I.  While the build up to her death was terrifying and unwanted, once it happened, my own morbidity bloomed.  Every creak and groan in the house after her death was “mom watching”.  Every time I would misplace my keys, Shelby would exclaim that “mom hid them”.  Her ashes had to be placed in our china closet behind closed doors as extra zombie-Megan-insurance.  Her coping mechanism with her own mortality became MY coping mechanism, because it worked.  In those first months after her death, I cried, a lot, but those rounds of tears would usually end when I would think of Megan looking at me and saying “hey dumbass, if you want to see me, don’t do it by leaving the oven on”.  There was always some smart-assed comment she made that snapped me out of a funk.

So now, with Sarah in our lives, we have yet another person that has experienced a lifetime of loss.  She has the triple crown of “types”.  Short-term illness (sorry, two years will always be short term to me), long-term illness, and sudden loss.  I can feel comfortable around her with morbid humor, because she has it too.  She’s not overly sensitive and doesn’t take offense if I make an off-color comment about someone/ thing.   We decorated the house for halloween, building a “cemetery” in the front yard, and placed Megan and Drew’s initials on two of the headstones.  When “Drew’s headstone” was toppled by wind, I made a comment that “Drew needs to stop falling…he tends to do that a lot” (for those who don’t know, Drew was killed in a helicopter crash).  Sarah, without skipping a beat, said “I love you because you went there”.  She knew there was no implied insult or whitewashing of his circumstances of death.  In fact, it showed that I recognize the way he met his demise, and found a way, however insignificant, to make lemonade out of it for a minute.

Even Shelby from time-to-time will joke about Megan being dead. We may be discussing a decision of some sort, and wondering what Megan would have thought or done, and Shelby will quip something to the effect of “well, we can’t ask mom…she’s dead” and go about her business with her hereditary evil grin.

I guess the point of all of this rambling is that, for both Sarah and I (and Shelby as well), we are able to look at Megan and Drew’s lives as something that we can be proud to be a part of, in the ways we were a part of them.  Megan and I joked about her impending early death all the time when she was alive, so why should I not continue to joke about it when she’s gone?  Although Drew didn’t have the certainty of death that Megan did, he was in an incredibly dangerous profession, knew the risks, and still faced them head on.  I can neither speak for him, or ask Sarah right now (I’m at work), but I’m sure that there was a bit of that same morbid humor about those risks that Megan had.

It’s not being insensitive to avoid using big poetic, beautiful words  when describing a loss.  It’s facing reality with an evil grin. It’s making lemonade out of lemons, and finding a way to smile about something that “should”, in the eyes of an outsider, cause us to burst into tears.  It’s not speaking ill of the dead to joke about the unequivocal fact that they ARE dead.

I’m not really sure what the moral of all of this is.  I’ve now lost my train of thought, and I’m sure it’s Megan’s fault.