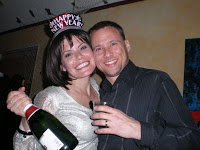 New Year’s Eve is my #1 most difficult holiday. More than Christmas, more than Halloween and more than Maggie’s birthday weekend (2nd weekend in December.) Saturday will mark the third without a midnight Maggie-and-Chris lip lock. It’s difficult to imagine kissing someone else on that day and at that time since her lips are the only ones I’ve kissed at that special moment since 1999. Because of tradition and love and respect, it seems like that special moment is reserved, forever and ever, just for her. But this year I was going to try it and see how it went. I’m pretty sure my intended date had no idea the significance of the place she stood because she’d have no doubt bowed out for that reason alone. But it doesn’t matter; for unrelated reasons I’m going stag…. Again.

The last two New Year’s Eves have been less than pleasant. Each time there were two gun shots right to the heart – a double tap, executioner style. The first bullet is the silence just following the “THREE! TWO! ONE!” as the group kissing-fest begins. The second is the line of sympathy hugs from friends I get right after the kissers realize “Oh, Chris, the lonely widower!” Click, click! Boom! Boom! And I’m out.

This year I was hell-bent on changing things up a bit. I was going to bring a date. (Gasp!) And I was going to kiss her right there in front of everyone right at midnight. Oh yeah. It was going to be epic. But stay with me; I had given this a lot of careful thought. Yes, I’d get some attention from those in the crowds who knew me only as half of Team Maggie-and-Chris. But my thought on all that attention is that they’d have to deal with that themselves; I can’t be held captive to other people’s emotions. Most of my brain power, however, went to pondering how I would feel. Holy cow…. The crowd. The countdown. The smell of champagne. The memories of kisses past. (A thousand tiny cuts, it seems.) Then holding not-Maggie in my arms and kissing not-Maggie’s lips. Then holding not-Maggie’s hands and (the biggie) smiling and pretending like this was the night of my life! I gotta summon poker face. Could I do it? Could I pull this off?

Here’s what I came up with after a LOT of thought: It doesn’t really matter. It doesn’t really matter if I can “pull this off” because what matters is that I try. What are the chances that I break down into a puddle of mess right in the middle of the celebration? Not huge. Not insignificant but not huge. What are the chances that I shed a silent tear and look a little pensive for a few minutes? Pretty good, actually. What are the chances my date notices? Probably also pretty good. What does it matter her reaction? A) She could be upset which tells me a lot. B) She could even make a scene which would tell me even more. C) She could rock the tender moment by squeezing my hand, smiling and letting me work through my complex emotions while giving me gentle, silent support (and maybe even running a little social interference for me while I get my game face back on.) But no matter her reaction, I win. I win because I did it! I took a huge step forward and conquered one more first – the first New Year’s Eve kiss with a not-Maggie.

But, alas, despite all my ponderings, I’m going stag. Taking not-Maggie as a date for the night-of-all-nights is not going to happen, for unrelated reasons. So here I am facing a two-shot firing squad again. But this year I’m not going to have it. I’ve made a plan. For better or worse, I’m leaving the party just prior to midnight. I really don’t want to experience that discomfort again so by the time the ball drops, I’ll hopefully be at home with my puppies drinking a beer by myself. Actually, now that I think about it, if I make it home by midnight, I’ll have plenty of kisses at midnight – stinky-breath puppy kisses. Ah, they won’t care if I cry. Suddenly, this plan just got better!