This past week, a friend of mine shared a story with me about a woman she recently met while out shopping for boots at a western store. As they looked through the sale rack, the woman told her how she got through the death of her husband by promising herself a new pair of cowboy boots every time she had to do something hard in relation to her grief… like going to the mortuary, or collecting his will. Eventually, she had a whole shelf of them and she wore them everywhere she went. “Even to church” she said. “I medicated myself with old western movies and cowboy boots”. My friend, who is actually a grief counselor, fully endorsed her grief medication. 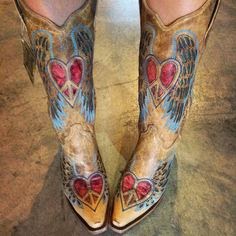 This woman’s story made me smile instantly, and reminded me of my own boot story. About a month after my fiancé’s sudden death, in June of 2012, on a horrible, grief-laden, sunny afternoon in Dallas, I walked my shell-shocked self into a local western store with one specific goal. To buy a pair of boots. Not just any boots, but THE boots. Golden tan with beautiful blue inlaid wings and red hearts. Meticulous stitching and hard soles for dancing, and walking a hard road. They were boots I had swooned over for the entire length of my relationship with Drew. The ones that were “too expensive and unpractical” to ever actually buy. The boots that were too bold and showy for me.

At least… for the old me.

The widowed me though, didn’t give a shit about any of that. She didn’t care about being too showy nor did she care about how expensive they were. So she walked into that western store, dropped $300 down, and walked out with the goddamn boots because she wanted them and she damn well deserved them. It felt SO GOOD. I knew right then and there, that these were the boots that were going to carry me through this mess. It was a glimmer of hope. When I walked this hard road, I would do so with wings on my feet. I would do so boldly, and proudly, and without apology to anyone. Those wings would always remind me of the pilot I love and of his zest and passion for life. They would remind me to keep on living, and that I can still be whoever I want to be.

I wore them to every art opening I showed my artwork in, I wore them to work, hell I wore them grocery shopping. Every time I put them on, it felt like wearing the essence of our love for all to see. Because we were bold. We lived and loved boldly and fearlessly together. We left no room for regrets and always walked a bit more confidently out into the world when we had each other.

The boots provided some piece of that back, some reclaiming of my own power despite everything falling apart. They gave me a way that I could say to the world (and to myself) – I am still here and dammit, I am going to choose to live. I’m not going to lie down and let this destroy me. It may take months and years to get back to living life more fully again – but until then, these boots will remind me of the promise to myself – and to him – to keep on living life.

Sure, you can see this sort of thing as silly. Or frivolous. Or a waste of money. And before he died, I did a good job of that. But when you’re down in the pit, things look very different. It’s dark down there. And pretty damned hopeless. And maybe, just maybe, a simple thing like a pair of fine-ass boots isn’t so frivolous. It reminded me that no matter how broken I felt, I could still create my own hope by the choices I made, even the seemingly small ones.

As it turns out, those boots became a symbol not just to live boldly. They became a reminder that I had the power to decide what would carry my feet through the day… and that was the first step towards knowing I had the power to choose how I would carry myself through this entire experience of living with his death. They reminded me to choose each day to try and live what’s left of this life boldly, and with both feet in.