Photo by Bannon Morrissy on Unsplash

More stories of dates. And Dates.

It’s all so messy. So bittersweet. Time. Events. Befores. Afters.

I think one of the reasons I have become so exceptionally good with dates is because I have had so many crushing events crashing into me, my life. Time in a crisis is slowed down, speeded up, unreal, amplified. I am in and out of “reality”, in a dream-state, existing, 1/3 present, living multiple and parallel (three, four, five dimensional) versions of myself, versions of life. It’s all exaggerated, impossible, magnified.

One day in the (I hope) far distant future, someone might dissect my brain and identify the unique-to-me lobe that contains date-remembering-capacity, and perhaps notice that it is way more interconnected, more node-y than the date section of other people’s brains. Perhaps I will end up with my brain lolling in formaldehyde in the Mütter Museum in Philadelphia. (I hope not).

I don’t know why it is but I just remember dates. I do have a few reminder systems – and Facebook “helps” with others. But more significantly I realise I must have some kind of a time sensor in my body that jiggles and wiggles and clatters and clangs and sets itself off saying, “hey Emma, you know it’s almost exactly x days/months/years since y happened?”

This week my jangly system clamoured, “Hey Emma, you know it’s about a year, almost exactly precisely, since you first communicated with Medjool. Since you first went out and met him face to face”. A quick check of the diary confirmed the jangling’s veracity. And then, only days after that one meeting, I thought, “oh shit – I really like this guy”, and wrote him what can only be called a Love Letter, which I gave to him to read on our second date. 8h30 am on a Thursday morning (his birthday), me all chloriney and baggy-eyed from a 90 min pre-dawn swim in the pool. Oh yes, and in that second date, the breakfast date on his birthday, he told me transparently and cleanly and honestly and straightforwardly and barely even hesitatingly, that he was seeing another woman. Who he was very fond of.

I was practically a fully-fledged practising Zen Buddhist Monk for the following 5 weeks, such was my brilliance at not getting too caught up in anxiety about whether or not Medjool would choose moi ou elle. Yes, another “love letter” (“love and respect myself letter”) was composed and exchanged at fairly high altitude in the French Alps in the intervening time. Yes, I wanted him, but I also wanted my sanity. And given what was going on with Julia at the time, my focus on sanity – and hers – prevailed.

And he chose me. (I still think of the Meredith & Dr. McDreamy scene when I write this). History.

No. History in progress.

So my body clanging system said, a year ago today – a year as in 52 weeks, not exactly the date thing because what is a date anyway – it was a Friday night and you know it and your body and your heart knows it – you met this Date guy. Medjool. A big, juicy, scrumptious date.

I had a reprieve for a few hours.

Julia was out at a party. She was only going to be back at 1h00. I took her there. She was going to spend the night at a friend’s who lived closer to the party and I would meet a medjool (theoretically one of many medjools but as it happened the only medjool who was interested in me and has since become Medjool).

The evening – my experience of it – was lovely.

The following days and weeks, the communications on WhatsApp text and audio is when I fell in love with him. But not that first night. I did really really like him, but I didn’t want to get in his knickers as I had with Mike. At least not right there, in the Indian restaurant. That wanting came later. Walking down a mountain, as it happened.

My diary says it was 52 weeks ago today I met Medjool. 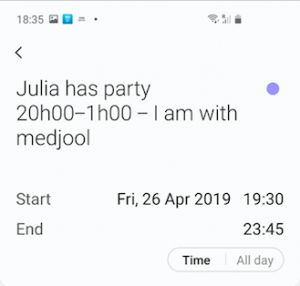 Julia had a party. I thought she was safe. She’d seemed so keen to go. She was with a bestie, a BFF.

I got home after a 3 ½ hour dinner with medjool-who-would-become-Medjool.

I looked at my phone and saw 12 messages from Julia. “Please come and get me. I don’t feel well. I don’t want to be here”.

The BFF’s mum had also written and called, and the final message said, Julia is home safely.

I don’t know if I want to go through this evening. This evening that so many weeks ago, 52 to be precise, opened a most stunning door of second soul-mate-quality love. And began to close the door on Julia’s ability to even pretend to lead a normal teenager life.

For the two dates will always be forever intertwined. The alarm bells go off so often. Every year. Every month. Every week. Every day.

This new love. This horrendous loss.