As many, if not most readers will know firsthand, grief shows up in myriad ways, often unexpectedly. I have been a widower for less than one year now, but already I have melted down driving home from the grocery store, reviewing tax documents with my accountant in her office, stumbling upon a dusty file or a banker’s box that contained useless and years’ old receipts while endeavoring to rid the basement of clutter, to mention but a few of these surprising grief triggers, along with the usual and expected ones.

I met with my internist today for the first time since the pandemic.  While he was talking about the extra poundage folks had acquired after being at home all these months, I mentioned that I had lost about 15 pounds.  My remark prompted him to turn to his computer to see when we last met before today, and he advised, “I saw you on March 5, 2020, right before the pandemic.”  That did it for me.

Bitter grief shot through me like it was bile reflux, and in that moment I again could see, feel, hear and remember everything: Lee’s unexpected and anomalous blood test results around this same time in March 2020; the persistent discomfort that she felt in her abdomen, which she suspected was being caused by scar tissue from the colon cancer surgery she had undergone in 2019; Lee’s repeated, ever more urgent calls to her medical team during March and April 2020 to report that her condition was not improving and my testy reaction that her “team” was not taking these reports seriously.

Today, I feel my gut tightening as I recall being frustrated by Lee’s complacency in the face of what I view to be an unimaginative, by-the numbers treatment plan that clearly is not working for her. Indeed, the occasional anger I would experience whenever I perceived that Lee was not receiving adequate care or getting the attention she needed, anger barely containable at times, momentarily flares up inside me now.

Instantly I remember how Lee’s condition only continued to worsen between March and June. At some point in time, her abdominal discomfort seemed to spread inside her body because she reported to me that it was no longer confined to her abdomen. Then, over a relatively short time that could not have been more than a few weeks, Lee’s constant discomfort first morphed into occasional pain, then into constant pain, which could sometimes be excruciating pain or even worse, causing her audibly to gasp or to catch her breath, or to issue slow groans.  I am also reminded how Lee’s pain grew so severe that eventually only morphine could temporarily manage it. And I can see myself standing next to her, she is still lying in our bed, my sweet, semi-conscious wife moaning intermittently through the morphine-induced haze. Today, I recall how, as soon as Lee came to, the cycle of pain started over again and I would end up having to administer more liquid morphine under her tongue with an eyedropper.

I also can see myself helping Lee to sit up, then simultaneously helping her to swing both legs off bed, and guiding her feet to the floor with my arm around her waist. At last, she is standing with my help, and I am able to walk her to the bathroom. The whole time my arm remains around Lee.  I see myself standing close by, waiting for her to finish as by this time she is so depleted we are both afraid that without my help she would tumble and fall onto the hard tile floor. And yes, I remember Lee being so sick that she would fall onto her knees and puke like a someone who has had too much alcohol, only in her case it is too much deadly pancreatic cancer. I can see myself as I stand over her, gently massaging her shoulders and stroking her neck while she gags and convulses. While this is happening, I take stock and observe how wasted and reduced this relentless cancer has left her. I lift Lee to her feet and gingerly walk her back to bed, thinking, she feels too light now to stay alive much longer.

While these instantaneous thoughts and recollections, images and sounds are occurring inside my mind I simultaneously am experiencing flashes of the several hospitalizations Lee was forced to endure shortly before she died. The individual episodes are blurred now in terms of the whys and wherefores but share a single end point: the warm summer afternoon when Lee’s oncologist finally shows up to her hospital room following a week of repeated calls. There is the moment when Lee forces from her an admission that she thinks Lee has no more than a few weeks of life left in her. I can still see the doctor as she turns tail and, to my eyes at least, flees, unable to issue a single comforting word to my wife, despite the promises that I had heard her repeatedly make to Lee during 18 months of treatments.

And I can also recall being surprised by the doctor’s harsh prediction, but not being shocked by it. I also recall Lee’s shocked reaction, which only lasts momentarily. Then I see her get angry. I think how glad I am to see that Lee is angry since it means she still wants to live. I can recall feeling encouraged by her fighting spirit.

In my mind I also see Lee finally back at home on a sunny day with friends and family in attendance. We are grateful and truly happy to be with her. For some it is the last time.

Of course, once her doctor departed, I had brought Lee home as quickly as I could and did so over some objections from hospital staff. Nonetheless, at this very moment I am feeling the same regret that I felt at that time that I had not brought Lee home soon enough.

I also experience our final two weeks of life together. What I recall will remain private for now, except I will tell you that today, at this moment, while visiting my doctor, I still feel admiration for Lee’s remarkable display of personal courage in the face of death. I am still filled with admiration for her rare empathy. To the very end she remained more concerned about how her death would affect the survivors than what it meant for her personally.

My inadequate attempt here to describe what occurred today during my visit to my doctor aside, keep in mind that these memories, sights, sounds, and images did not occur in any sort of orderly fashion or particular chronology. Rather, this messy jumble of mental sense impressions arose in me unbidden, spontaneously, and in the blink of an eye, triggered by the mention of March 5, 2020.

And yet, in this moment it seems as if I have been traveling freely through time itself.  In doing so I have glimpsed other significant events, for example, Lee’s fight against colon cancer which predated the onset of the pancreatic cancer that is listed as the official cause of death, but which, I am firmly convinced, contributed to her death. It still leaves me with a bitter taste. This is a story for another day.

Suddenly I recall the only time I ever observed Lee feeling sorry for herself occurred when she finally had to acknowledge we probably were never going to get to fulfill our plans developed over the course of a wonderful relationship. And in this I share her disappointment. I will conclude by merely saying that today’s piece is not the piece that I had intended to write for this week, but it turns out to be the one I needed to write this week. 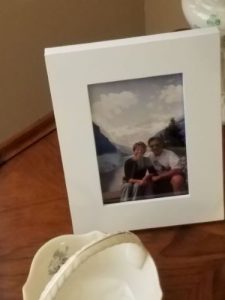