Lee had great empathy and was incredibly kind. From personal observations and long experience, I came to appreciate her unfailingly pleasant demeanor, but I did not fully appreciate the positive effects that her powerful combination of empathy and kindness had had upon others until word had spread that she was gravely ill. Then an unsolicited outpouring of love from friends, family, former co-workers, neighbors, even people who simply had performed work for us from time to time over the years, attested to the many lives that she touched for the better. 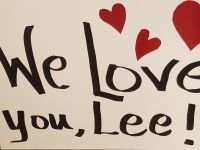 On the evening of July 2, 2020, Lee died quietly at home. Just the two of us. I’ll keep private the circumstances, except these: Along with Lee’s brother, Mont from upstairs, and the very nice, young woman from the hospice service, I sat outside the house to await the arrival of the funeral home attendants who were to remove Lee’s vacated shell. The weather was balmy. While we sat on the front stoop talking, a car pulled up in the darkness, double-parked with its light on, and a young fella, who was unknown to me, exited the driver’s side door, holding a paper in one hand and looking around for something. He asked if we knew where Lee ___ lived, and learning he had the right place, handed one of us his paper, which turned out to be a handwritten letter addressed to Lee. In it the fellow said he’d heard about her illness and wanted to pass along well wishes. He recalled back when he was a young, green lawyer newly hired by the City, he had a boss who belittled and bullied him. Lee had noticed, pulled him aside, listened to him as he expressed diffidence about his future, and offered him a few supportive words. Now, more than a decade later, he wanted her to know that he was married with a young family and had a good job and a rewarding career but had never forgotten their short conversation. As I say, I didn’t know the guy and Lee had never said a word to me about the episode. 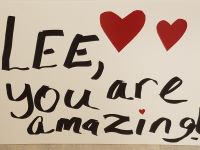 I’m no empath nor particularly kind by nature. However, today when I think of this young lawyer’s letter or other examples demonstrating Lee’s genuine kindness, this line from the Beatles always comes to mind: “And in the end, the love you take is equal to the love you make.” In tribute to her, I honestly quote Jules Winnfield, the memorable hitman featured in the film Pulp Fiction, who said, “I’m tryin’, Ringo.”

I have neighbors who have lived next door to me for the past 5 years or so. They have a tiny basement apartment where they live with their two young children. The boy, who might be 5 or 6 years old is autistic. Sometimes in summer when their windows are open you can hear him wailing. I hadn’t bothered to get to know either the two adults or their kids, but Lee used to toss the guy a little work after she learned that he’d lost his job. This past Fall, with public schools struggling to stay open during the pandemic, I happened to run into “Veronica,” who was returning home from school with her son. As a courtesy I asked how she was doing. Just small talk. To my surprise she said it was very hard on her because the special education classes her son was supposed to attend had been suspended. She seemed very downcast since her boy, who I’ll call “Mattie,” had been making good progress. However, without regular schooling, she feared he would backslide. As bad, her employer had cut back her work hours so she could not afford to get Mattie an expensive computer device with specially designed education software that the school ordinarily would have provided to her as the parent of a “special needs” child. In the end I offered Veronica the money to buy it, and she accepted. Her surprise and genuine gratitude turned out to be thanks enough, but this past Christmas she unexpectedly showed up at my door with a card for me and a can of holiday dog biscuits wrapped with a pretty bow for Lola the pup.

Another day I heard scraping outside and there was Veronica’s significant other, “Carlos,” out front shoveling my steps after a particularly heavy and wet snow. He waved. Now I have two neighbors who also are my good friends.

I recently started volunteering a little of my time to a local food pantry. Due to the pandemic, the patrons must wait in line while I grab stock from the shelves and fill their bags, their carts, their suitcases. Our “customers” obviously are down on their luck, and to my eyes many would appear not to have seen any in a long, long time. Despite personal circumstances that might seem humbling, they seem content and quite happy to be able to feed themselves and their own families. Some speak English, some Polish, but most speak Spanish. While I work the shelves, I pick up a phrase here or there. Our available food items change from week to week depending upon availability, yet no one ever complains, even if their favorite items are missing or “sold out.” Sprinkle in a sense of humor, add a dash of personal pride, and by at the end of my shift it’s been a veritable moveable feast of humanity that never fails to leave me thankful for having had an opportunity to lend a hand.

We have our regulars. My personal favorite is a thirty-something guy who arrives on his bicycle no matter the weather. He leaves with 5 bulging bags containing canned goods, rice, coffee, pasta and sauce, dry milk, juice, meat, poultry, beans, and bread–whatever might be on hand. Wearing one bag as a backpack, he balances two more on his bicycle, one on either side by the rear wheel and strings the remaining two bags onto a pole that he carries across his shoulders. I stop my work momentarily to watch the drama whether he will achieve sufficient peddle power this time to maintain his balance and forward momentum. He has yet to fail, an inspiring testament to the indomitable human spirit.

I shake my head and chuckle at the thought of me trying the same balancing act. Indeed, kindness has its own rewards. 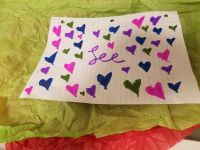