We in the Midwest are blessed to experience the Four Seasons, even if summer is too short, winter lasts about twice as long as it ought to, and spring is a rumor that most years shows up belatedly and lasts but a few short days. As I am jotting today’s entry, it’s currently about 33 degrees, but the calendar says March 20 and it’s the first day of Spring! To listen to their chatter, the birds already know it. I spot several robins gathered on a fence, having materialized magically, and right on cue, literally out of thin air. Meanwhile the bright red male cardinal who stays here the entire year is hiding high up in the leafless branches of a tree, singing his familiar and lovely bird song. I strain to spot him with binoculars but no luck. Small groups of drab sparrows, 4 or 5 at a time, flit through the side yard on their annual mini migration from the safe winter quarters located beneath my rear porch to the protection of the evergreen bushes located in my front yard.

Looking back a year, it was only last March that the pandemic, fully revealed, burst onto the scene, radically altering our day-to-day lives. And it was about this same time that I began to fear that my sweet Lee, after battling illness of one sort or another for much of her life, was approaching a tipping point. My worst fears were realized as she deteriorated steadily and, after just a few short and hard months, died in our bed in our home with me by her side.

So now alone, I had watched slack jawed while intrepid reporters daily detailed the awful impacts of the seemingly unstoppable and deadly sci-fi virus. On the handful of occasions this past year when I absolutely had to travel to the downtown business district of my city, I felt plunged into a zombie apocalypse landscape where people, vehicles, urban noise, pollution, and all bustle had overnight ceased to exist. In good time, when I waited but hadn’t fallen prey to Covid myself, I concluded the virus wasn’t going to be my sad fate. Rather, I started to believe there might be a future for me after all, especially as hopeful news spread of the race to produce an effective vaccine. Indeed, I was an early beneficiary of one of these vaccines and I keep a photo of me taken at the hospital on the day in January 2021 that I received the first of two shots, smiling behind my mask no doubt, grateful and happy to have been in the right place at the right time to receive it. 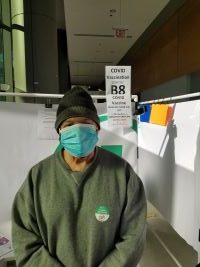 Mostly, however, I’ve been on my own, feeling cooped up, a voluntary and self-enforced house arrestee for a year or more. Lola the pup has been my constant companion since September, and, if you read these posts then you know she’s my special gal, yet more and more I find myself craving in-person human companionship. And this despite the sporadic company of friends during this past year. I never wholly abandoned an actual social life and maintained a semblance of one throughout the darkest days, back in the Fall through the national elections and beyond. I simply picked my spots to interact and tried to exercise reasonable prudence and common sense. You might say I was neither a mouth-breathing denier of the disease nor paralyzed by fear of catching it; however, I have encountered both kinds of folks over the past year, including some close friends who have been vaccinated, yet to my way of thinking remain nervous or gun shy about living.

This is not for me. Now, with the arrival of calendar Spring, my mind is firmly fixed on the resumption of a full life that is worth living. I am busy preparing to participate in the first federal jury trial in the District since the earliest days of the pandemic that is set to begin in early April. I’ve recently purchased new custom clothes as I ready to step out on the town for dining, concerts, all matter of warm weather activities. These new duds should be ready for wear about the time the trial ends. Already I’ve taken preliminary steps to make property improvements, including replacing my rickety wooden fence with a new wooden fence. I’ve also started up Lee’s gardens, both here and at Deer Tick Manor, since in this coming year I plan to enjoy the great outdoors as much as anyone not living in a completely wild state could hope. I’ve resumed guitar lessons so that I’ll be in tune, as it were, if a fellow musician calls to ask if I am interested in an impromptu jam session. I am thinking about new road trip adventures with Lola. I plan to play pickleball regularly just as soon as I figure out what the hell a pickleball is. And, of course, say goodbye, Zoom.

I do not waste time wondering whether my sunny outlook and lofty expectations for life (at least in the near term) will alter or in any way reduce my grief for Lee’s death this past July. The answer would still be no. In this first year without her I’ve come to accept and to expect that grief will creep up and seize me when I’m not looking, whether it’s choosing apples out of a bin in the grocery store, reaching into a messy drawer in the kitchen for something to write on and instead coming away with a piece of paper that has her handwriting on it, or noticing one of the old photos she kept around, which I honestly hadn’t paid much attention to before now. A photograph that someone took of her many years ago, long before Lee and I met: A kid with big expectant eyes and an earnest expression, who touches me deeply because I can already recognize in the image the makings of my humane and good woman, taken from me too soon, and cheated out of her own precious life despite working so earnestly to secure her place in it. My own positive expectations aside, I expect the occasional crying jags to  occur at inconvenient times and without fair warning.

If it turns out that my plans to move forward prove harder to execute in practice than theory might suggest, still I’m determined to move forward. Undoubtedly there will be bumps and bruises: The approaching first anniversary of Lee’s death, for example; a long overdue, Covid-deferred memorial for her at Deer Tick next Fall as the leaves start to turn; the sad realization that some of the personal relationships we enjoyed together as a couple will not exist for me as a single man. However, I fully expect I shall hear Lee’s voice, shouting encouragement from the sidelines of the Great Beyond whenever I stumble: “Come on, Ravitz, talk is cheap, I wanna see you do it. Live! Be happy!”  There is no dichotomy between my continuing journey through life and her death, no mutually exclusive propositions at work. Unbreakable, hopelessly intertwined, our love connection reaches across the void. This connection is not a tether that holds me back, but, to the contrary, it is a powerful, liberating force that will help to free me to pursue my own fate to its conclusion.