As soon as I heard media report that we would at last see the sun and enjoy temperatures above 70 degrees, Lola the pup and I made quick plans to take a respite from our long Winter here in the city to enjoy a bit of “west and welaxation“ at Deer Tick Manor. When we arrived yesterday afternoon, the first thing that caught my eye was our beautiful, young Redbud.

Over the years the Red Bud has gotten slightly taller, but never had many leaves. There was nothing at all red about it. I left Deer Tick late last Fall wondering whether the tiny tree was going to make it.

Today? Well, just look at her!

She is ready to join her growing family of trees that we have raised in our years here at Deer Tick.

The newest members are the two apple trees. Apple trees require extended periods of cool temperatures to thrive. However, as I frequently have mentioned in these writings, cold is in great abundance where I live. Even so, it is going to be at least several more years until these trees produce, if they ever will, the first crop of apples. A predecessor tree used to produce a big crop each Summer; it put the deer in Deer Tick Manor. The shy animals simply could not resist that tree’s juicy fruit.

At dusk, the deer would emerge, surveying the scene from the edge of the woods, slowly and carefully venturing from the protection of the woods into the open space where our apple tree stood. As reward for their courage, they feasted on its bounty. Even so, the deer were ever at-the-ready, their large ears constantly tilting and flickering, tuned into the slightest sound above a whisper. Once spooked, in an instant the deer would gracefully high bound into the trees. Yet, our apple tree would draw them back, day after day, irresistibly, until, at last, the deer had devoured the season’s apple crop. I never understood how the deer knew when it was time for the apples to be ready, but generations of them engaged in this same ritual.

Unbeknownst to me, that apple tree’s insides must have slowly been rotting for a long time. One Spring, I returned only to discover that the tree was dead. The deer disappeared and I have not seen them ever since. One day in the future, my hope is that the two new apple trees will bring back the deer of Deer Tick Manor.

The most elderly member of the tree family is a lonely pine, yet another Arbor Day Foundation gift, which started its life here as a mere twig. 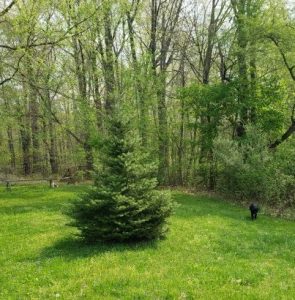 The pine took its sweet time giving evidence of any growth, but from year to year has grown to now be almost ten feet tall. Each year the tree’s uppermost vertical branch gets taller by one foot or more but remains bare. Then, over the course of the next year, the pine fills in the empty space with fresh, green needles.

To keep it company, today it stands flanked by two young tulip trees, which to our delight, we discovered growing wild on the property in the field, lost among some junk trees. We dug up the Tulips and transplanted them to their current sunny locations. Tulip trees are the tallest of the eastern hardwoods. We have one mature example on the property, which is home to numerous chatty birds and small creatures. 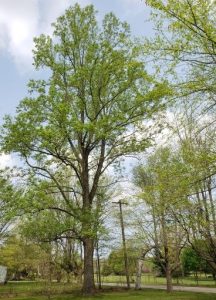 Lore has it that Daniel Boone used the wood of this tree for his 60′ dugout canoe. Our tree must be at least one hundred feet tall. Perhaps one day I will build a wooden yacht!

The two young river birches that front the house at Deer Tick are handsome lads. Nature has blessed both birches with beautiful, symmetrical limbs and perfectly shaped leaf canopies. Even as compared with the elegant white birch, the bark of the River Birch is special; still paper-like, but more distressed and interesting.

In contrast, the crippled Red Dogwood, which as a newly planted sapling managed to survive a collision with a neighboring eighty foot tree that fell directly on it, today stands as a proud survivor. Although it is never going to achieve the rounded shape that is characteristic of the best of its kind, in its own way it is nonetheless quite beautiful. 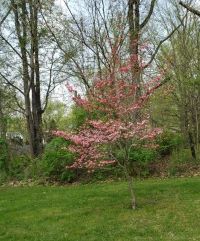 Of course, these trees are not the only living things that we have ceded territory to during our time here at Deer Tick Manor. However, they are the ones I feel that I have come to know personally. If these trees are not family, for me they remain a familiar source of deep enjoyment. I look forward to watching them develop. Some times, seeing how they are thriving here, I  suddenly will ache for Lee, deeply wishing that she were still here to share my pleasure. I must settle for the trees being tiny pieces of her wonderful legacy.