I wrote this post a few days ago in the middle of the night.  I’m posting it just as I wrote it on that night.  Read on.

I think I must be the only person in the world to experience anxiety attacks while I am actually asleep. Seriously. It can be 4am and I can be in the middle of what I would hope to be a solid 8 hours, when suddenly I find myself awake and gasping for air. Gasping. No joke.

Such was the case this early morning around 4am. I woke up suddenly with a tight chest and a disconcerting inability to take in air no matter how hard I tried to inhale deeply through my nose AND mouth. Technically I was able to get the air in, but it just didn’t feel like it was enough and that sent me into panic mode. (No comments about heart attacks etc please. I assure you that my heart is working properly, and if you send comments in that direction I will just start panicking more.) By 5am I was trying to sleep sitting up in the hopes that it would help me breathe. By 6:20 am (the current time right now as I write this) I am two Ativan deep and soaking in a tub while trying to talk myself down from the proverbial ledge.

I have no idea why this happens to me.

Someone reading this post right now is probably shaking their head and saying “Seriously? You watched your husband fade from the strongest man in the world to a mere shell of his former self in nine short months. You honestly don’t know why you have panic attacks?” That is true, for sure, but I don’t really think that’s the whole reason.

I think it’s a combination of three things … the nightmares I continue to have about work that unfortunately did not fade with retirement, the constant memories of the real life nightmare I lived through while Ben was sick, and the fact that there is actually something wrong with my nose (medically) that inhibits my breathing at times. I’m having the nose issue surgically corrected soon (leading to a whole different set of anxiety issues) but the other two reasons, well, they are a bit trickier to deal with.

Those memories that cause anxiety are a tricky thing to deal with. If anyone out there has any answers ,do send them my way. I’ve done everything that is reasonably possible for someone to do and still this anxiety wakes me up and keeps me up. I hate it. In an attempt to cope over the years I have spent time in a yoga studio, I’ve exercised, I’ve seen a psychologist, I’ve tried golf (I heard that it was a relaxing sport and might calm my mind while I focussed) and I’ve also tried shopping and drinking copious amounts of wine and downing Ativan when necessary.  (I don’t combine the Ativan with wine, so no worries there).  Sometimes I write as a means of coping, and when all of those things fail I go on a full frenzy around the house – cleaning, reorganizing, moving furniture.

Such was the case last evening as I felt the anxiety coming on and I decide that it was extremely important to start moving furniture. And I don’t mean “move furniture” in the way you probably imagine I that mean it. I’m not talking about sliding a chair and a couch around to see which looks better in the limited spaces I have. I mean I MOVED furniture. I physically moved a love seat and two chairs straight out of the house and into the garage. (My car has lost it’s home). I moved one full sized chair from the basement (where my son had struggled to place it a mere few hours earlier) all the way back upstairs, and I lugged it’s mate back in from the garage to sit beside it. I moved a coffee table and a rug out into the garage and I carried a very heavy trunk all the way to the basement from the top floor. I hung pictures, I moved pictures, and I hung more pictures. It was exhausting and I was dripping in sweat, not to mention having to endure the death stares of daughter #2 because her boyfriend was the “lucky” person who happened to be here and “volunteered “ to help me. (You didn’t think I did all that alone, did you? Not possible). Yes, they were right in the middle of watching a movie and enjoying their own down time when he “volunteered”, but when Anxiety comes a knockin’ one has to do what one has to do to keep it at bay. And I needed to move some furniture.

Unfortunately the moving plan was a partial fail.  I say partial because the living room now looks lovely, but it didn’t send Anxiety packing. I was left dripping in sweat and exhausted yet apparently unable to sleep, so that part was clearly a fail. Liam is likely at home right now wondering why he ever thought it was a good idea to try to spend a quiet evening at the Saint-Onge’s.

Having been awoken at this ungodly hour, my final idea of the night was threefold. It involved the aforementioned ativan, this trip to the tub and the writing of this blog post while I soak. That combination may have had some effect … my eyes are currently getting droopy and if I leave the tub now I may actually be able to catch a few quick zzzzz’s. And quick it will be, since it is now 7:06 am and I am due to be up shortly. (Insert tired sigh here.)

You know what would have worked for me right from the very start? A hug from Ben. It didn’t even need to be a good one … it could have just been one of those “I’m tolerating your crazy and I want to sleep so I will hug you if it helps” kind of hugs. But it would have helped. Because as long as Ben was there it all would have been OK.

But now he’s not here and I am reduced to a person who now gets woken by anxiety.

However, knowing that there is always a bright side to every situation, here is a picture of my bright side: 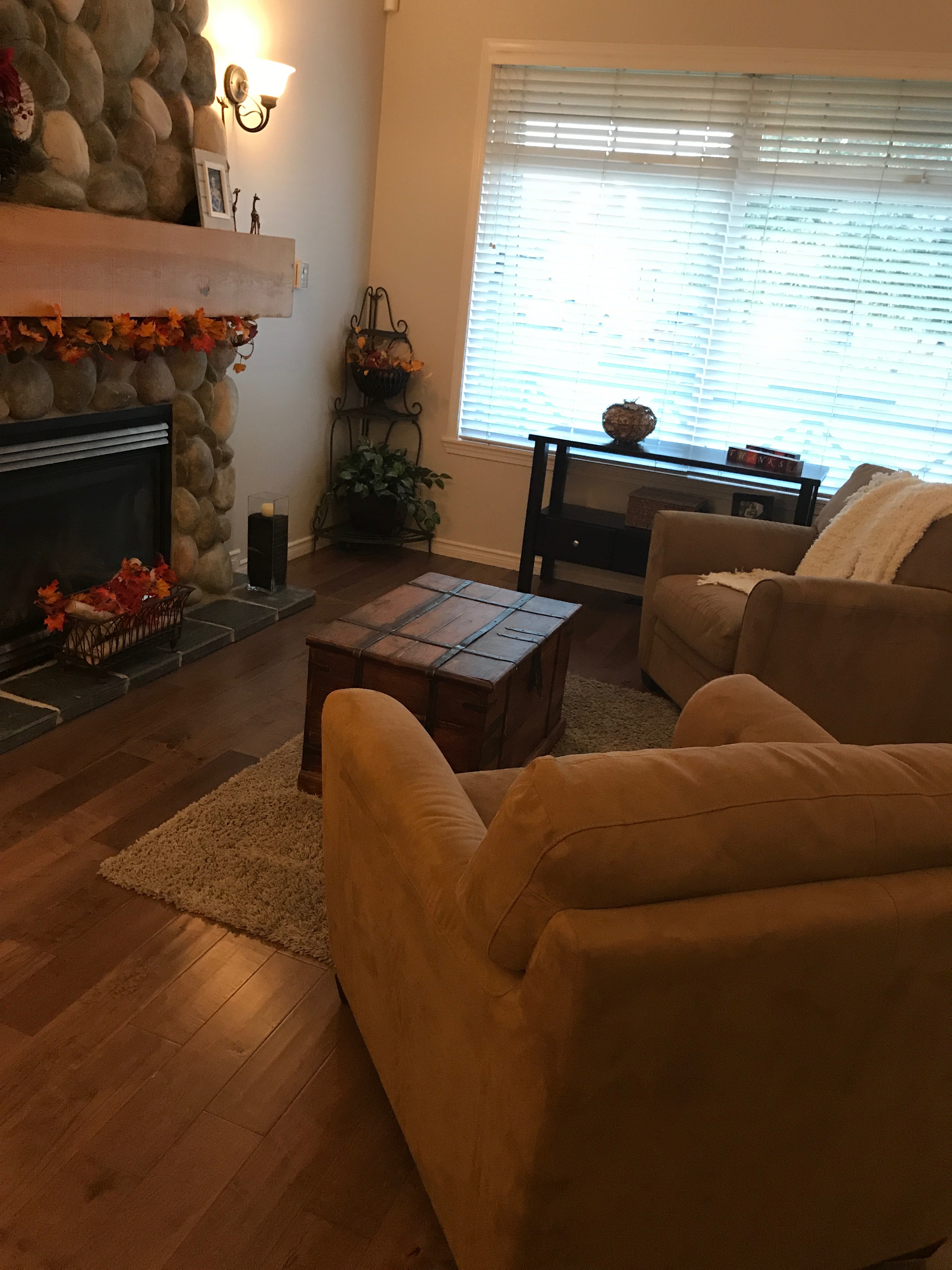 The living room looks much nicer.  So there’s that.

Warrior on, people.  I will if you will.