Good advice, right?  I have always liked to pass that piece of advice onto my kids whenever I had the opportunity.  “Take time off before University.  Go see the world.  Live your life while you can.”  That’s what we used to say to them. We had all sorts of tidbits of advice which included, “Happiness is a choice, so choose it.”  “Be a good person.” “Work hard.” “Be kind” and “Live Your Life”.  We only get one of them.

But then Ben died, and everything changed.  I became torn between wanting my kids to live their lives and wanting them home with me every second.  I became obsessed with controlling everything they did, even when I knew I was being ridiculous.  Even when a little voice inside my head told me to lay off or they would say “Sayonara Mama” and move right out of this house so that they no longer had me breathing down their necks.  Even when I caused my son immense frustration.  Even when I made my daughter cry.

I got a bit of a wake up call last April.  It was my daughter’s 18th birthday.  Her second birthday without her Dad, even though he’d barely been gone a year. We found out he was dying just a few days before her 16th birthday, and he died right before her 17th birthday.  (And here’s an odd little fact, if I may digress for a moment. We had to actually look at a calendar to pick the right day to tell the kids that their Dad was dying. Strange, huh?  It reminded me of choosing a date for a birthday party.  “No, we can’t do it on that Saturday because there’s a soccer game.”  “The next one won’t work either because we have that work thing.”  “OK, lets do it mid week, after school, but before my evening meeting.”  We didn’t want to tell the kids before Zak could take his cake to celebrate his one year of sobriety, and we didn’t want to ruin Jaime’s 16th birthday, so we found a date right in the middle.  It was odd to sit back and pick a day to ruin everyone’s lives, but now, two years later,  nobody needs to think about how their special day was ruined by the shittiest news ever.  So that’s good, I suppose.)

Anyway, back to my point.  Last April my daughter celebrated her 18th birthday.  She had clearly had a couple of super shitty years filled with sickness and death, followed by intense grieving and everything that was the opposite of living.  And on her 18th birthday her boyfriend decided that she should live life, so he bought her the future opportunity to go sky diving.  WHAT???!!!

I lost my shit.  Lost it.  The mother who had always wanted her kids to lead full and exciting lives completely lost her shit over the possibility of her daughter living an exciting life.  I screamed and yelled and complained about what a terrible human being her boyfriend was for causing me to suffer more stress and anxiety.  Hadn’t I had enough??  I actually said that.  Yelled it, really.  I told Jaime that her boyfriend was selfish and inconsiderate for causing me further distress. (He wasn’t there when I said it.) I ranted and raved and I may have even cried.  I know for sure that I made Jaime cry.

If I hadn’t already lost my Mother Of The Year award, and I probably had, I certainly lost it that day.

I recall spending the next few days thinking about how Ben would have reacted.  I was tempted to believe that he wouldn’t have wanted his precious little peanut to risk her life and he would have emphatically said “NO.” (Followed by laying a beating on the boyfriend.)  I really tried to convince myself that is how it would have gone down.  Eventually I gave up, because I knew it wasn’t true.  That’s not what Ben would have said at all.

After all, this was the Dad who raised his daughters to not only believe, but to know without a doubt that there was nothing they couldn’t do in this life.  Ben was not the Dad who coddled and babied his little girls.  In fact, when they occasionally tried to bat their eyelashes to get something out of their Dad it would actually piss him off.  He did not dig manipulation and he made that quite clear.  If one of the girls wanted a certain “NO” from their Dad, batting eyelashes and twirling hair was a sure way to get it.  Ben raised his girls to be strong.  To be independent.  To be straight forward.  To be the kind of woman that said, “I would like to try sky diving.”

We worked hard to raise strong girls with an enthusiasm for all that life could offer.  Was it really reasonable for me to be surprised that Jaime actually learned from that?  Was it so hard to believe, that after two years of death, sadness, and grieving, that she might want to feel alive again?  And wasn’t that probably a good thing?

I was scared shitless for her to follow through with this idea of skydiving.  I imagined the impossibility of having to suffer through another unimaginable loss.  And then I wondered if it would really make me happy for Jaime to live in a bubble and never take any risks, just so that I wouldn’t have to suffer again.  And I realized that to ask her to live like that was to ask her to sacrifice her life and her happiness.  For me.  That is not something the mother in me wants for my kids.

Meet Jaime.  This is what she did today. 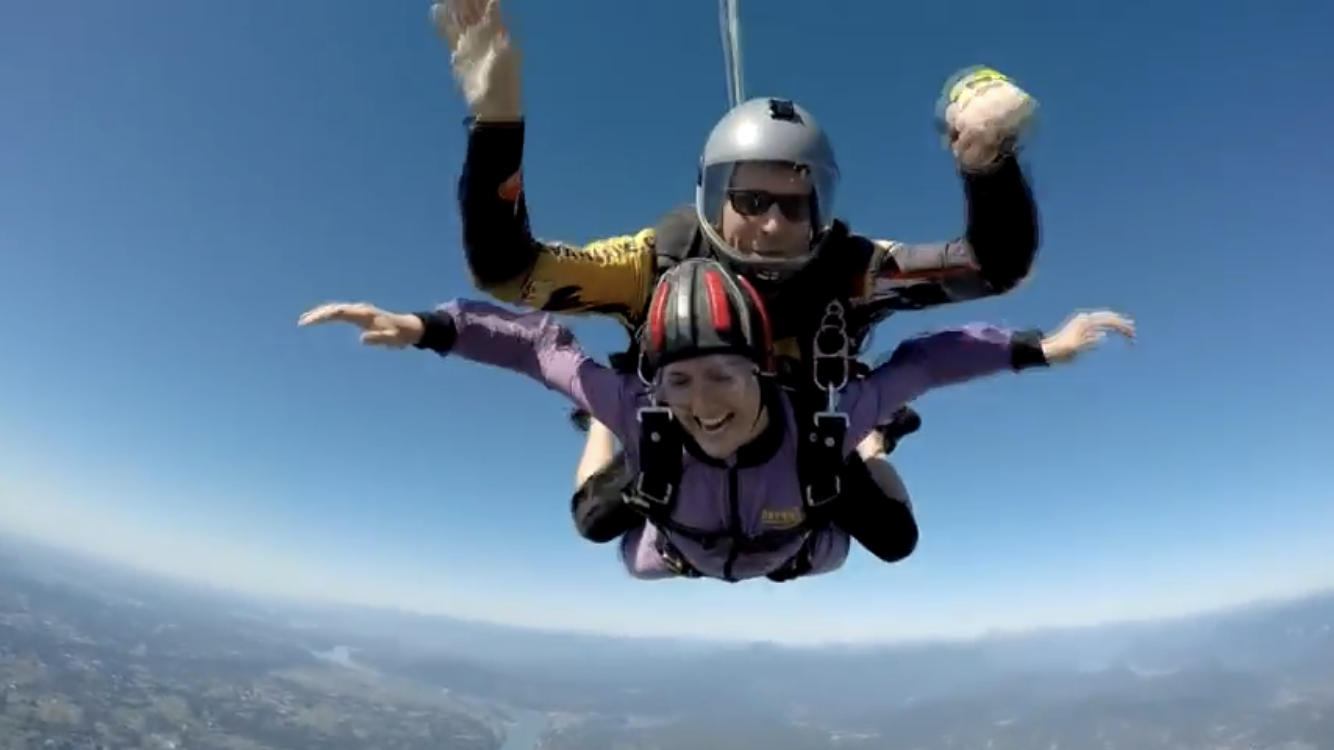 She lives her life.  I will try to remember to live mine, too. (And I’m sorry I yelled about the boyfriend.  But I probably won’t tell him that)  😉