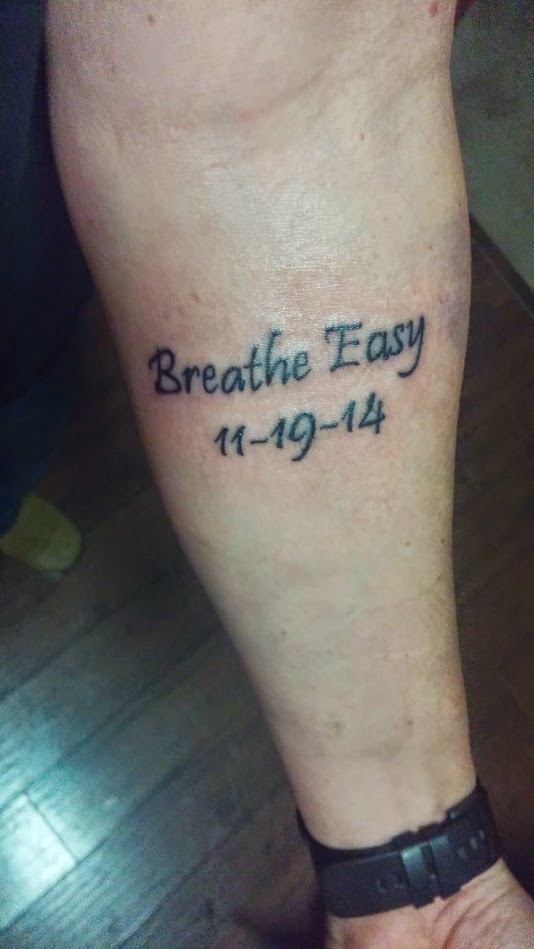 I’m going to do the easy thing today, and feed off of Sarah’s sunday post.  I was in the woods for the first time in a while this past weekend, while Sarah’s sister came into town for a few days.  They got to have their weekend together, while I got 24 hours or so next to a campfire.

Her sister got her first tattoo on Saturday.  From her son, Sarah’s nephew. As Sarah watched, she thought of various tattoos that she might get.  Ink that she has thought about for years. New ideas for shared tattoos with her sister. Memorial tattoos, signifying Drew.

She hated that her mind went to death when contemplating what she would get.  As she wrote, even a shared, “fun” tattoo with her sister would ultimately, end up as a reminder that one of them is gone.  It’s inevitable, and I get it.

But…I have 4 tattoos.  I have a Bulldog, with the letters “USMC” just above it, signifying a time long past, when I was actively serving in the Marine Corps.  I have a “tribal” tattoo across my shoulders, signifying a silly time when I was 20 years old and had no common sense or class. On my right forearm (and incidentally, the subject of my first post here for Soaring spirits, 3 years ago) I have a tattoo that simply says “Until my dying day…”.  Megan had the other half of that saying on her own forearm, which said “…until my last breath”.

And finally, on my left forearm, it simply says “Breathe Easy” with the date of Megan’s death.

Every one of my tattoos means something, but in the essence of keeping on subject, I want to point out that those final two were conscious looks at death, both before, and after the fact.  Megan was going to die before me. We knew it. She was going to die from her lungs shutting down. It wasn’t premonition…it was almost a sure thing.

So, we decided, not long before that death arrived, to memorialize our relationship in ink.  It was a relationship that had by no means ended, but we knew it physically would someday. Out of her 17 tattoos (she was a little obsessed), it was the most meaningful to her, because it was shared, permanent acknowledgment of our marriage, and of the fact that although she could die, ink doesn’t.  It can’t be taken off like a wedding ring. It moves with the person from place to place, and through life. It’s prominently displayed for all to see (and question the meaning of…those are always GREAT conversations with non-widows who are just making small talk).

It was also, very specifically, focused on death.

She took her last breath in November of 2014.  Within a month, I had gotten another tattoo. It, also, matched one that Megan had, albeit with a different date.  She had the exact same as pictured above, but with her brother’s date of death. I knew I would be getting this on my arm someday, ten years before I actually did.  For me, no thought was put into it, yet it was always known. At least 50% of her own tattoos had something to do with mortality and death. From the aforementioned memorial to her brother, to the large, purple ribbon with the defective gene for her disease, Cystic Fibrosis, on her calf.  There was a large saying on her thigh, stating “Just when the caterpillar thought the world was over, she became a butterfly”, signifying her impending death, just before luck brought her a new set of lungs in 2011.

Even though for most of Megan and I’s relationship, I never got a new tattoo, I was very, very aware of the thoughts of death that meant so much to her that she had them permanently etched into her skin.  When the time finally came, I went straight to the same thoughts that she had, and Sarah is doing much the same.

The major difference, is that though Sarah has had far more loss than most of us in her life, tattoos have not been a significant part of it.  Even a headstone is less permanent or present as a memorial than something that is quite literally, a part of your body. It’s completely natural to want one’s first tattoo to be “in memory”, yet I get why it’s uncomfortable to abstractly realize that death is such a significant part of one’s life that you want it to be a visible, daily reminder.

That all said, I DO want to be a part of her getting her first tattoo.  I will encourage her to get whatever her heart tells her to get, because that is what it should be.  I will be by her side, just as I was with Megan, even if she’s getting Drew’s name tattooed on her forehead, or her sister’s face tattooed on the palm of her hand.  It will be all the more meaningful to have her own nephew injecting that pigment, understanding the meaning behind it.

In my opinion, that’s what ink should be.  Meaningful reminders of one’s past. The meaning may change over time, but regardless, it has meaning.  Even Megan’s seemingly innocuous tattoos still have meaning to me, and to Sarah and I (Megan had seven star tattoos, and seven shooting stars were a symbol of Sarah and Drew’s relationship…talk about a sign).

Should she get a memorial to Drew?  What about a shared one with her sister?  That’s for her to decide. As long as it’s meaningful to her, I will encourage it.  As much as she hates that she goes straight to death when perusing ideas, death has been part of her life, and will always continue to be. It is one of the things that makes her who she is. A physical, visible representation of that is not something I personally have ever felt uncomfortable around…in fact, I married a woman who’s multiple tattoos reflected precisely the same thing.  50% of my own tattoos mean that someone I love has died.  I cherish those memories, and those tattoos, and I know that someday, I may be getting another one signifying that the person I love is present, or maybe not.