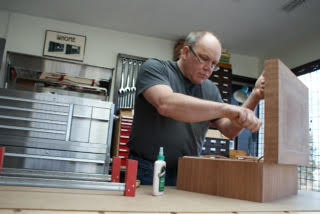 Today our Widow’s Voice blog is sharing the words of John Wiggers. John wrote this story about his sister-in-law Wendy, whose liveliness and spunk touched everyone she met.

What John didn’t know as he wrote these words honoring Wendy’s life, was that his wife Teresa, their children Brad, Kevin and Alison, and everyone who knew and loved John, would sooner than anyone imagined be honoring his legacy. He died on September 18, 2014.

John was an award winning furniture designer and maker who was passionate about the environment and in 1998 became one of the first cabinet makers in the world to become certified to FSC chain of custody standards.  At the time of his passing he was on the board of directors of the Furniture Society.

He was an avid blogger and aspired to one day write a book.

He loved a good scotch and a cigar and the kids and his Teresa meant the world to him!

Please send a thought today in memory of John, and ponder the lesson in the words he wrote honoring Wendy who inspired him to dance.

My sister-in-law Wendy Forbes passed away this week, and I am writing this to share an amazing serendipity that happened last night which relates directly to her.

I’ve known Wendy for almost as long as I’ve known my wife Teresa, which is 26 years. Wendy was married to Teresa’s oldest brother Mike, and given that Teresa has nine brothers and sisters, Wendy became somewhat of a matriarch early on to the Forbes family — especially to the youngest siblings.

Wendy was blonde and petite and a restless bundle of energy — with a disposition very much akin to the Energizer Bunny. She was always busy doing something, usually involving the organization of various family events. Whether it was Thanksgiving, Christmas dinners, Easter, weddings, birthdays, family picnics, parties or any other excuse for people to gather, you could always count on Wendy to be immersed in the thick of the workload to get things done and make sure everyone was having a good time.

Wendy also had more than her share of sadness and tragedy in life, including the passing of her dear mother-in-law Betty in 1995; followed by her own mother passing away unexpectedly shortly thereafter; the breakup of her marriage to Mike; meeting, then losing (to cancer) the love of her life Paul Farquharson a few years ago; plus raising her own children as a single mom while holding a full-time job and caring for a bed-ridden father who was himself injured in a car accident. Although Wendy’s challenges would have crushed most lesser beings with greater ease, Wendy bravely continued onward as if undaunted.

Through it all, one of her greatest joys was dancing and one song in particular stood out amongst all others: namely Rasputin by the band Boney M.

Regardless of where you were, once you heard that song begin to play all you had to do was look to the dance floor and you knew you would find Wendy dancing her Cossack dance in tune with the music. Invariably it became Wendy with the floor to herself, surrounded by friends and loved ones clapping in tune to the music while Wendy danced. There were times where her ability to dance and high kick (in heels, no less) would defy gravity.

Last year, Wendy was overjoyed to become a grandmother for the first time, to a baby girl named Ashleigh. Not long afterwards, a routine doctor’s visit to check out an annoying cough resulted in a shocking diagnosis: Wendy had lung cancer. Even worse, the particular cancer Wendy was diagnosed with was especially aggressive with almost zero hope for recovery. Chemotherapy would buy time, but not a cure.

Wendy decided to undergo the treatments because she resolved herself to being on hand to witness her granddaughter’s first birthday. And while Wendy’s condition rapidly deteriorated in recent months, she did manage to achieve her goal. Then last Monday, less than a week later, Wendy passed away peacefully in her sleep. While the news was expected and somewhat inevitable, it still came as a shock. The remainder of the week became a flurry of activity to make the necessary phone calls, finalize arrangements, attend visitations and finally, on Thursday, lay Wendy to rest.

True to Wendy’s organized and giving nature, she had already made arrangements to host a reception at her favourite restaurant following the funeral ceremony. She also made sure that a round of drinks on her was taken care of at the reception. Wendy was true to being Wendy, even after she was gone.

Then last night, a group of us ended up attending a charity fundraising dinner/dance to raise money in support of Hearth Place, a local organization committed to supporting cancer patients. While plans to attend this event had been made months in advance, it just happened to take place a mere two days after we buried Wendy. In some way, all of us were relieved to go, because most of us were drained at the week’s events and were happy to have an evening where someone else was looking after meals, cleaning up, etc.

The weather was a perfectly warm summer’s evening, and the venue of an empty hangar at the local municipal airport could not have been better. The hangar doors were wide open, which made the space feel like a giant gazebo. A vintage Beaver Seaplane was parked outside, along with a number of vintage 1970s muscle cars — in keeping with the retro 1970s theme of the evening.

There were raffles and live auctions planned for the evening, and around the perimeter of the space were countless tables holding items for Silent Auction. There were all the usual goods such as gift certificates, clothing etc., and I had my eye of a pair of field-level Toronto Blue Jays tickets, as well as a stainless steel Budweiser beer cooler.

As Teresa and I walked around the tables we came upon an anonymous donation of a hand-knit afghan, on top of which sat a white stuffed Teddy bear. Attached to the bear was a tag that read: “The Wendy Bear.” The inside of the tag read as follows:

“The Wendy Bear is being sold in memory of Wendy Sittler — the very special late wife of hockey legend Darryl Sittler … The money raised from the sale of The Wendy Bear will go towards helping terminally-ill patients spend time at home with their loved ones. Because Wendy was such a kind, caring and generous individual, we dedicate this bear in her memory.”

Teresa and I looked at each other and we both had goosebumps. Not only did this bear share the same name as our Wendy, but Darryl Sittler was one of her heroes as captain of her beloved Toronto Maple Leafs. In addition, the description of Wendy Sittler was equally applicable to “our” Wendy. Teresa wasted no time in grabbing the pen to place the opening bid on this bear.

As the evening progressed, Teresa made an effort to keeps tabs on how the bids were progressing. While she told me she didn’t really care if she won it or not, I knew what she really meant was that she wanted the bear. And, so, I abandoned my bids for the tickets and cooler and focussed on winning the bear. Despite a flurry of activity near the end of the evening, we ended up with the winning bid.

After paying for this item, I brought the bear and afghan back to the table and Teresa was clearly overjoyed. She wrapped herself in the afghan while others in our group took turns checking out the stuffed bear.

And then, it happened. Whatever song had been playing came to a close, and the familiar drum riff that opened Rasputin began to play. All of us looked at each other with absolute shock, with one saying “O.M.G., I cannot believe this is happening.” Needless to say with The Wendy Bear in our hands, and Rasputin beginning to play, there was no question we all had to get up to dance. And, yes, even I, who in 26 years had never danced once with our Wendy while she was alive (and for good reason, since I cannot dance,) I too got up to dance. Our whole table was on the floor.

We danced in a circle and the girls took turns dancing with The Wendy Bear — invariably kicking this stuffed bear’s legs high the way our Wendy used to do. My brother-in-law John took photos, and if he’s reading this, I’ll remind him that there are “Terms of Use” policies that prohibit him from publishing photos of me dancing, due to the offensive nature of such material.

Afterwards everyone talked about how “weird” it was for such a coincidence to happen, and there was speculation that one of us requested for the song to be played. All of us swore emphatically that this was not the case. The song just “happened”, seemingly by chance.

While some might dismiss this as a mere coincidence, my feeling is that on some level, this was Wendy’s way of saying good-bye. And rather than going out on a sad note, she did so by finding a way to express herself in the final act of dancing to the song that gave her the greatest joy.

To the anonymous donor of the knit afghan and The Wendy Bear, I would like to say thank you for your kind heart and warm generosity. Your efforts last night are measured in ways far greater than the dollars you raised for a worthy cause. You helped give closure to a number of people by enabling us to say good-bye to the tragic loss of a loved one in the best way possible.

And to Wendy, I say goodbye and we love you. While the pain of your passing may eventually be healed with time, you can never be replaced. You will be missed and always be dear to our hearts. 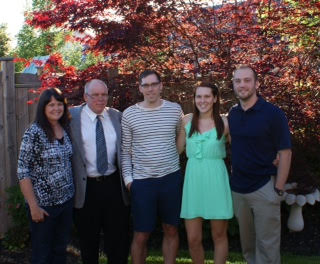