If I were a writer, writing a book about this woman who travels the country in a pink car, towing a tiny pink-trimmed trailer, living the legacy of love left behind by her husband, this is what I would write for this moment in that timeline~

And, right then and there, somewhere in the 5th month of the 3rd year of doing this crazy, crazy, Odyssey (because, really, what the HELL was she doing, living a life so far outside of her comfort zone that it was almost absurd, at least to her?) she came to the realization that her grief was SO huge, the devastation SO complete, that all she could do with the hugeness of that LOVE she carried in her heart for her dead husband was to allow ALL of those things to really, truly, exist IN her all at the same time, along with the tears and the laughter and the pain and missing-ness of him. And she’d KNOWN since he died that this is what was real but hadn’t felt the ENERGY of it BECOME in that time.

It became not merely intellectually realized manifestation and not only FELT but it became HER.

And with that realization came the understanding that THIS, whatever THIS was, or is, was now who she WAS and she didn’t have to judge any of it one way or the other, or try NOT to grieve or be sad or happy or anything. All she had to do was ALLOW all these emotions to co-exist, which she always thought couldn’t be done, honestly but time had taught her that yes, they could and not only COULD complete opposite feelings be thought and felt at one time but when she gave them all space together she felt more powerful than she had EVER felt before.

So this woman who drove a pink car towing a pink-trimmed trailer, with pictures of her love story framed inside, with shades of pink and gold and copper all ’round, with tassels and prayer flags and love banners pinned to both windows and on the door and not one bit of it anything but an expression of the love she and her most beloved husband had for 24 years….she made the down in her gut and through her blood vessels decision to make LOVE her superpower in a way never done before, ever. In the history of man, only a select few had ever had this absolute power of Love BECOME to such a degree.  And it wasn’t at all, EVER, a gentle birthing; it was an explosion of all she had become FROM love and it tore through her and it burned and shredded all she had been and all her life had been and all that it wasn’t because she was without him and she would always be without him in this world now and now here was THIS, that surpassed the force even of who they’d been together but endured BECAUSE of who they’d been together and…

She became.  Love and loss and grief and tears and destruction and light and darkness and nightmare and memory and love again and again and again and she became. She wasn’t sure of how and what or any of those questions humans ask of the world and of themselves. Questions no longer mattered. Explanations for not doing THIS…IT… better, more, differently… self-judgement and care for societal critique of HOW to do IT, to grieve, how to mourn the loss of a lifetime, all of the love of who they’d been and how it must now be….all collapsed into the air around her and swirled as particles and dust until it all crashed and surged into a nuclear surge of what was more than energy or power.

She BECAME in capital letters because that is the only thing she could do with THIS, with THIS that was more potent than she or him or them but WAS because of she and him and them.

A force. A reckoning. Such as this was not a natural occurrence.  It didn’t come to birth from nothing. Or anything. Or everything. It superseded mere words or ideas of life and love. It could only come BECAUSE of a Love that crossed all boundaries and barriers and energy fields and became more powerful BECAUSE it must transcend breath and being.

And, knowing, feeling, recognizing, realizing that power, even though not fully, firmly, grasping what or how or who or when, she decided to let it all BE what it was, and not try to change it or shift it or mold it to suit anyone other than herself.  She merely decided to HARNESS it and so now there she stood, higher than she’d ever stood…lightly bouncing on that diving board way, way, up there…straddling the clouds almost. Standing higher than she’d ever willingly stood…in spite of her abject fear of heights and falling and crashing and drowning…

And exploded into being. 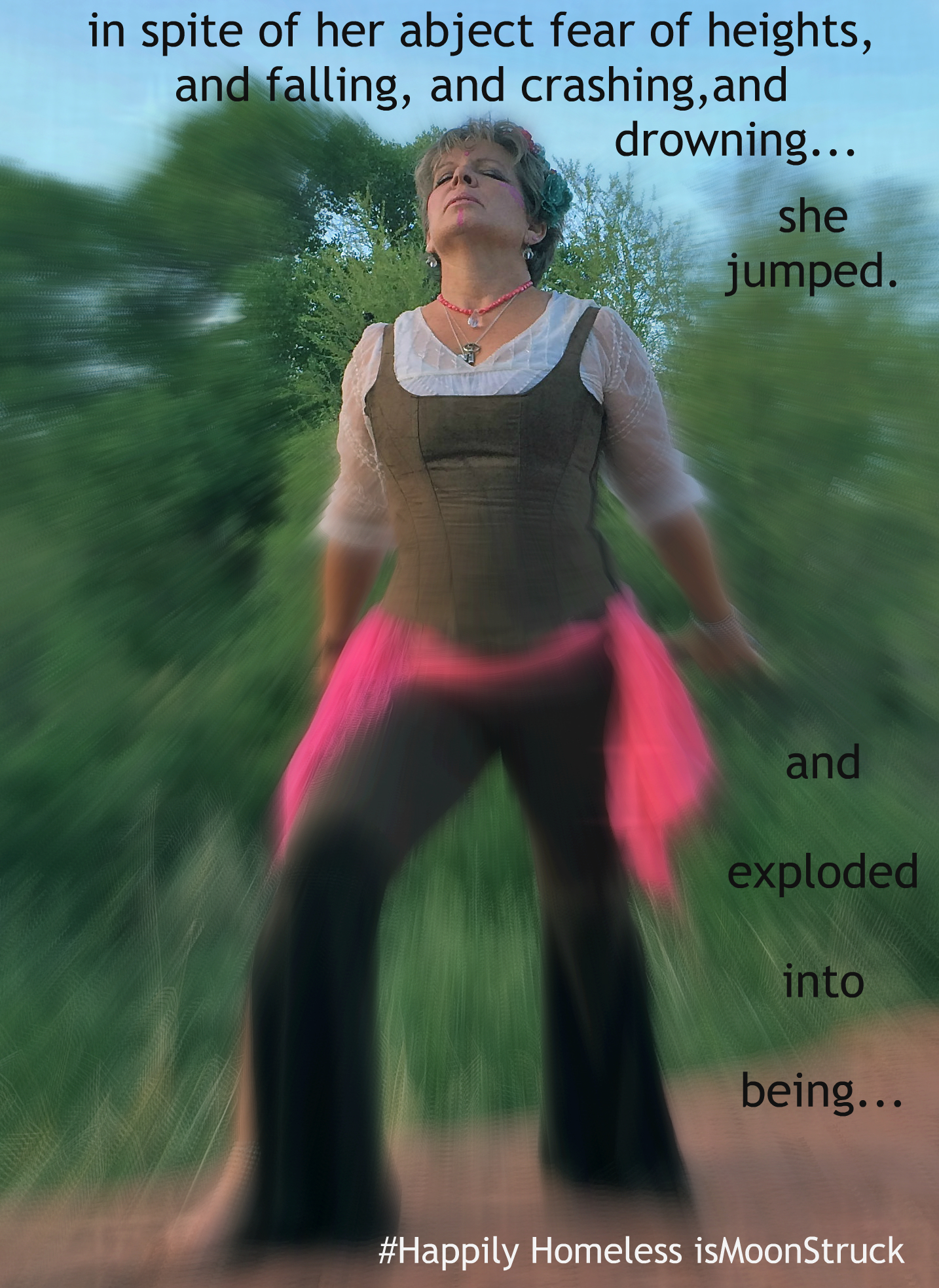