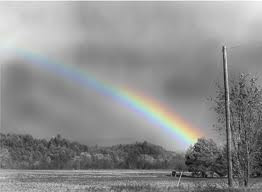 …. nor all black or all white.

In fact, I’m going to step out on a limb here and say …. that nothing is just black and/or white.
Well, except for grief.
Parts of grief.

In the beginning (and actually longer) my grief was black.
Solid black.
Cold, inky black.

I’ve been in caves before.  You know, under ground, deep and cold caves.
And there have been times when I’ve been on a tour of a cave and the guide turned all of the lights off, so that we could experience the solid, black darkness.
That darkness doesn’t hold a candle to the cold, lonely, smothering, black grief that enveloped me, that seemed to seep into and out of every pore of my body.
That blackness blinded me to anything in front of me, any thought of what might lie ahead …. or of any notion of a future.  Not even a future of one minute.
Literally.
But I guess I don’t have to tell you that, right?
And anyway, I digress.

The older I get, and I suppose the more “experienced” I become with life (I think that’s a very kind way of putting “the more suckiness I encounter in my life”), the more I realize that nothing really is black & white.
And I am also learning that I guess that’s a mostly good, though not very comfortable, thing.
People are not all black nor all white (no matter what they might tell you).
Situations are not all black or all white.
Rules are not always black and white.
And grieving …. wow, grieving is anything but all black and white.
No matter what people may tell you.

If you ever hear anything like that coming out of someone’s mouth …. I’d bet they have never, ever grieved.
There are no rules.
There is no magical “one year” mourning period.
I don’t know anyone who woke up on day 366, took off their mourning clothes to put on some color and were miraculously “all better”.
Part of me wishes that it were like that.
As easy as that ….. put in 365 days of hard grieving …. and then be done, walk out …. like walking out of prison.
One day you’re in …. the next day you’re out.
Although I would imagine that ex-cons have a lot of baggage to deal with once they’re out, too.
See?  Nothing is black and white.

One would think that the longer “out” one gets from the date of being widowed, the easier everything becomes.
Wouldn’t one?
Well, if one were not widowed, one would.
We, however, know that it’s not quite that simple.
Not that quite ….. black and white.

Yes, some things get “easier”.
I actually think that we get stronger and so our grief is easier to carry.
But then something happens …. for whatever reason, or …. for no reason at all.
Like …. July the 4th.
When I was driving to a friend’s house and it occurred to me that in 5 months I will be 4 years “out”.
And I almost had to pull over to stop and regain some sort of control of my mind … and body.

The moment that thought …. that number …. went through my head, it was like a bolt of lightening had searingly jolted my brain.
My heart started beating way too rapidly and I could feel my blood pressure going up.
I could also feel my stomach lurching as fast as my heart was racing.

Easier?
Not so much.

I wouldn’t have guessed that.
But then …. I’ve learned not to “guess” too much anymore …. about anything.
Or anyone.

Because nothing ….. is black and white.