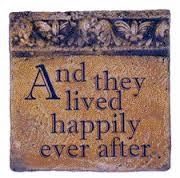 …… is just a line in fairy tales.
No one knows that better than those of you reading this blog.

Many of us had terrific partners.
But none of us had one who was perfect.

I always found it interesting how suddenly perfect Jim became …… after he died.
Don’t get me wrong, he was a good man and a great husband.
Most of the time.
Those are the four words that people seem to forget …… “most of the time”.

Sometimes it’s the widowed who see our loved one through the veil of grief that separates us from our true memories.
But most of the time, at least for me, it was others who suddenly seemed to promote Jim to the level of sainthood …… or as close to it as a non-Catholic can get.

In the beginning those comments were comforting.
But after a while they started to get irritating.
And then very irritating.
Because seriously?  Could anyone actually live up to the selective memories that people tend to gain after someone dies?
Not only that, but would anyone actually want to live with someone who was that perfect? I don’t know about you,  but I would’ve found a such a spouse to be a huge pain in the ass.
Plus, it always felt like the closer Jim came to perfection, the further away I drifted.
And I was nowhere close to it when he was alive.

So maybe I won’t be living happily ever after because I’m widowed.
But I’ll settle for how I would’ve lived …… and how I’ll continue to live, with or without a spouse:
Normally ever after.
With happiness stuffed in there as often as possible.