It is hard to imagine how the arrangements could have come off any better than they did. First, to my surprise, by the time I arrived at Deer Tick Manor on Thursday night in advance of our celebration of Lee’s life this past Saturday, the large party tent already had been erected on the lawn behind the house. 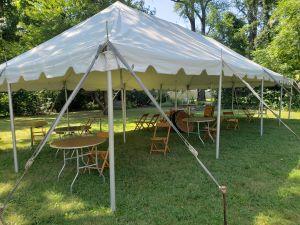 The following morning, around 8:15 a.m. or so, a specialized transport truck arrived carrying two deluxe porta-potties and one free-standing double sink. The driver/technician unloaded and placed these items in my driveway as directed, quickly and efficiently filled them up with water, stocked them with hand soap and paper supplies, wished me good luck with the event, and just as quickly departed to make his next delivery. 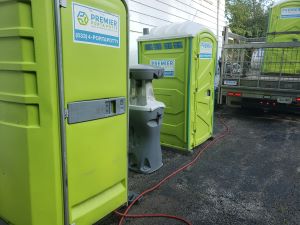 Despite the relative early hour, the sun already shone against a bright azure, cloudless sky. The air was still, very unusual for Deer Tick. In fact, a couple nights before my arrival, violent storm winds had ripped a giant limb from the larger of the two ancient maple trees that bracket my garage, narrowly missing the structure. Today, the air was quite humid and already too mild, precursor to a couple of the hottest days of the entire Summer. Dog days, indeed.

I could see that the grounds looked terrific. As a bonus, I had been informed by Dave that Mr. Taylor and one of his grandsons had without much fanfare cut up and removed the fallen wood. Dave is Lee’s oldest brother. He and his wife, Elaine, had been my houseguests the previous 10 days. They visit the area each year around the time that Brad, his son, and Brad’s family are visiting here from Italy. The timing of our celebration was an accommodation to Dave and Brad, but also Paul, Lee’s other older brother.

I personally would have preferred mid-Fall after the leaves start turning colors and the air feels crisp once the sun sets. At such times Lee and I sometimes would enjoy a small fire in the outdoor pit before adjourning together hand in hand for a hot tub and cocktails. Lee would light the candles while I opened the bathroom window. The cool air poured over us as we sat immersed in hot water. Steam would rise from the water. We would listen to the night sounds. And, if we were lucky, the moon would be in the low sky directly above us.

Mont arrived with Lola the pup around noon. About one hour later, Craig and Donna rumbled down the lane in their RV. Dave and Elaine had already gone to spend the night at the home of Elaine’s cousin, but not before promising to return early Saturday morning to help me with the final setup in advance of the scheduled noon start. Paul was supposed to arrive Saturday around 9 a.m.

Craig had built two birdhouses for the occasion. One, a small house for wrens; the other, an ambitious and large structure that he hoped would entice a barre owl. 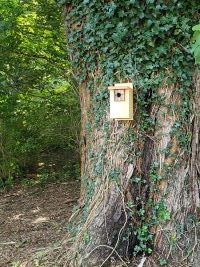 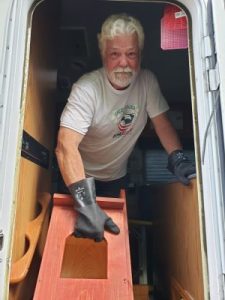 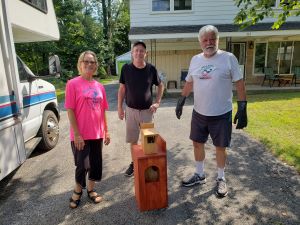 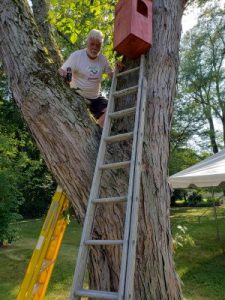 Being Craig, he had insisted on hanging these, but unfortunately picked the hottest part of the afternoon to perform the chore. He apparently became dehydrated and passed out while drinking a cold beer! Donna was shocked and terrified but still managed to dial 911 and talk calmly with the dispatcher. By the time the fire department and ambulance arrived we had already managed to revive Craig with ice applied to his neck shoulders and arms. He was much too large and heavy for me and Mont to easily manage so we instructed him to stay down on the floor. Consequently, the world’s largest EMS paramedic, who I am sure could have slung Craig over his shoulder had such an action been necessary, was left with little to do other than fend off the affections of Lola the pup, who was excitedly jumping up on her hind legs to lick him. The paramedic seemed to enjoy her attention.

On Saturday, Dave and Elaine did not come back until nearly 11:30 a.m. Predictably, Paul and Joanna showed up about 90 minutes later than they had intended. On the other hand, our friends Bob and Linda unexpectedly had arrived early after a long drive that included a time change. Without prompting those of us present snapped into action so by the time Paul and Joanna arrived we had everything well in hand.

That morning also brought the first tears of the day to my eyes as I had watched my friends eagerly work, as motivated as I that Lee’s celebration should go off without a hitch. The indelible image stands as one of the highlights of the day for me.

By 11:30 a.m., when food for 80 that I pre-ordered was delivered exactly on time, we had set up tables and chairs, created displays of photographs and select artwork throughout the first floor of the house, 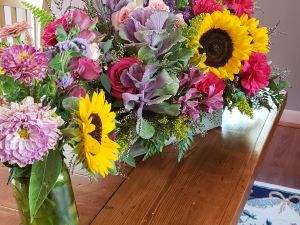 and set aside the outdoor spaces that would be used later for the speakers and music. 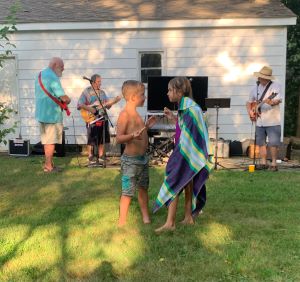 I even had time left over to fill up Lola’s pool with fresh cool water, so she would be able to enjoy the day despite the rising heat.

I did not take many photographs, but, fortunately, Paul managed to take a fair number. I was left to “work the room,” as they say, personally welcoming each guest. In short order, my job became a juggling act behind the steady flow of new arrivals. Although I have no official head count, our visitors’ cars eventually were lined up on both sides of the lane for a good distance.

I wish I had thought to take a picture of these vehicles. However, according to some neighbors, who, unlike myself, reside here permanently and year around, the volume of traffic was unprecedented, apparently exceeding that of any gathering within living memory. Added with the sudden and unexpected appearance of several emergency vehicles in my driveway just one day earlier, I think we provided the neighbors with a bit of excitement and tales they can exchange for years to come. Like any good fish story, I expect that the line of parked vehicles will only grow longer with each retelling.

After two or three hours of eating, drinking, and socializing, we got down to the earnest business of making our tributes to Lee. 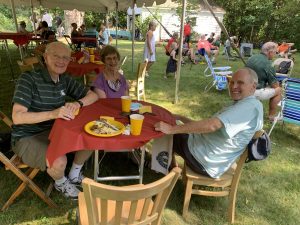 Leading off, Lee’s nephew Joe, a professional musician, sat at his electric piano to belt out the tune he had penned for Aunt Lee at her request just before she died. I had heard him perform it once last year, but this time his voice quavered with the emotion of the moment.

I had the honor of being the first to speak. I had given long thought to what I wanted to say, of course, and had been practicing aloud regularly because I found it so difficult to get through my words without breaking down amidst the swirling images in my head that these words would produce. Today, I would nearly make it, though not quite. 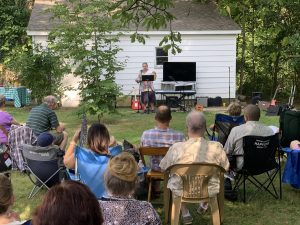 I need not have worried. I was followed by a steady stream of friends and family. In the aggregate I think we covered everything that needed to be said. You know you are speaking truly about a person when you listen to other people who, in their own unique ways, basically are saying the same thing but have not had any preview or chance to compare notes. We were greeted with spontaneous applause. Paul capped off the “ceremony” with brief a slide show that he put to music.

Then it was time to let our hair down with music and more food and drink. Folks started to drift off to their cars in the late afternoon heat. By 8 p.m. it was just me and Lola, Craig and Donna, Bob and Linda and a few other close friends. We finally had been forced by the heat to retreat inside the house, which was centrally air conditioned and quite comfortable. However, whenever someone had to step outside, the stifling air poured over the threshold and into the house, a reminder to keep the door closed.

Sunday came around and would be even hotter than Saturday. Lola and I were up early, long before the sun would rise above the treetops to the east, but it already must have been 80 degrees. Lola and I walked alone about the property. Except for the sounds of the birds, it was completely quiet. Meanwhile, Craig and Donna were asleep in their RV. Mont was asleep in a guest room in the house. Around 6 a.m., Bob and Linda, who I had put up at a nearby motel that we jokingly referred to as the Bates Motel, texted to let me know they were already on the road and headed back home.

Once everyone was awake, we enjoyed coffee on the front porch, that is, except for Mont, who does not drink coffee. Craig made delicious eggs with peppers and cheese. He is an excellent short order cook. He fixed up the bacon that Mont had gotten on Saturday while he at the store getting ice for the beverages and a large bottle of Tito’s for me. Good thing, too, because my guests nearly completely consumed the vodka, which, aside from enormous quantities of bottled water, had been the most popular beverage on hand during the event.

Around noon, Mont returned home. Craig and Donna waited with me for Donna’s best friend, Jane, to arrive. Jane had been returning from a road trip on Saturday and was unable to make the event but insisted on coming to pay her respects to me and Lee. A bit of serendipity, Jane not only arrived with a fresh bottle of vodka in hand but hard to find diet tonic water, a key ingredient of Lee’s famous vodka tonic mix.

Toward evening, alone except for Lola and my icy beverage, I reflected on the celebration of Lee’s life. Folks had assured me that the event would provide some measure of solace or closure for me. Maybe one day it will, but at that moment I felt sadder and emptier than I could recall feeling in some months.