On the day after Thanksgiving Lola the pup and I travel to Deer Tick Manor to officially close the place until Spring arrives once again. Because the house is drafty and it rests on a cold slab of earth and concrete, this process requires battening down the hatches to the maximum extent possible to protect it from the annual pummeling it will get from the combination of strong, prevailing northeastern winds, heavy, wet lake effect snow that the area is famous for accumulating in heaps, and the relentless cold, which can produce enormous hanging ice formations that tug at and strain at the seams of the place.

Inside the house, I carefully inspect the refrigerator and cupboards: out-of-date food items must get tossed, while anything deemed worth salvaging becomes salvage. The likelihood there will be extended periods of extreme cold means that the water not only needs to be shut off completely, but that both toilets must be drained and filled with antifreeze. The plumbing pipes throughout the house must be blown clear of moisture, else it creates an unacceptably high risk of systemic damage.

Electronics, fragile or valuable items must be gathered up and stacked near the front door for transport back home, and so too any used towels or bedding. Before final departure, I lower the thermostat to 55 degrees.

I must never forget that the local utility company is an industrial behemoth controlled by insatiable and greedy pirates. State regulators permit the utility to charge honest customers like myself exorbitantly high rates for heat and electricity. Despite all my precautions, energy costs in the past have typically run about $200 per month to maintain the vacant house. Worse, this year the utility company has been issuing sticker shock notices to customers for the past several months, warning that heating bills are likely (i.e., certain) to skyrocket this Winter. The utility will never admit it, but the primary reason for this dire rate hike prediction is that the utility controls the regulators. And, as I say, insatiable and greedy pirates control the utility company.

Over time this process had become a post-Thanksgiving ritual for Lee and me. Then Lee died. Last year, my first without her, I performed this ritual largely on my own with a big assist from Deb, one of the neighbors. 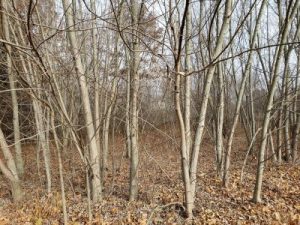 Robyn drove to Deer Tick this past Friday. Together, we managed to basically have the house shut down by mid-morning on Sunday when she left Deer Tick to return to her home. Before Robyn departed, however, I can report that we spent an altogether enjoyable weekend together. A few examples suffice:

One morning we took Lola on a long off-leash walk during which we could only marvel at her indefatigable energy and ebullient spirit. Observing her dashing back and forth, full out, sprinting fifty yards or more at a crack from a standing start, splashing through every puddle of water she could manage to find, until her tongue literally was left hanging, made us smile and laugh. While we feebly attempted to keep up with her on two puny human legs each, Lola literally ran joyous circles around us the whole way.

One night we got dressed up a bit and ate dinner at a cozy inn with a fireplace and a marina located on a lake. Afterwards we enjoyed a few spirited hours of gaming at one of the local casinos. After some considerable play, Robyn, who had never previously played the game known as roulette, won $1 at the wheel. It always feels good to walk away from the table a winner, even when the winnings are a bit slim.

One cold afternoon, as the sun was in the process of setting, we witnessed thousands of sand hill cranes approach in tight flying formations from all directions, and gracefully descend from the sky to roost overnight. In the short time it took for the late November sky to turn colors and settle into dusk, the majestic cackling throng had wondrously transformed an ordinary farmer’s field into the world’s busiest air landing strip.

On Monday morning, following the shutdown, Lola and I hit the road to spend a few days with Bob and Linda. I have mentioned them before in these posts. Bob and I have been friends since high school. Through Bob, Lee and I met Linda. This was more than ten years ago. Lee and Linda simply clicked: They were sisters and best friends. And despite being separated by two states, we saw them regularly and spoke every week. Then Lee died.

On this occasion, as I was making the drive I thought, the road is familiar, but the journey feels different. Did the feeling have anything to do with the fact that less than 24 hours before I had been performing the post-Thanksgiving ritual with Robyn?

Among my closest friends, only Bob and Linda have actually met Robyn. One night, over dinner, they wanted to know whether I had introduced her to any of our mutual friends. I replied I had not, pointing out that several of our mutual friends are by nature quite judgmental, and I was not prepared to subject Robyn to their judgments.

I could see Linda nodding. Then she said that she understood me because she had felt that she was being scrutinized during her introductions to some of these same people. Importantly, she added that this feeling had not bothered her in the slightest since she did not care a whit what they thought of her. Linda’s words were reassuring, as Robyn previously had expressed something similar to me.

Like Lee, who died from cancer, my old and dear friend Bob has tasted this same awful disease, albeit in different flavors. I am concerned whether Linda, in her heart, believes that Bob’s long-range prospects for survival are any rosier than Lee’s turned out to be for her. For her sake, and mine, I sincerely hope that I am wrong. However, if not, then far be it from me to disabuse her when I have my own serious reservations.

My plan had been to return home today, but Bob and Linda ask me to stay one more night. I agree because, strangely, I feel like my presence is bringing them a little comfort, though I am not sure why this should be so.

The long drive home can wait one more day, I suppose. I am familiar with the trip, even if the journey itself seems destined to remain murky. And, in any case, I have seen that Lola the pup already has made herself feel right at home. 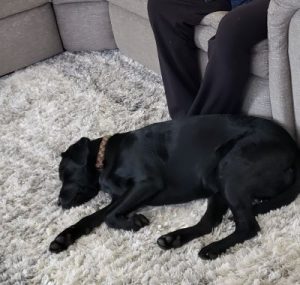