As soon as the calendar had turned from February to March, I started agonizing about preparing this post. This past March 30 Lee should have turned 67 but she died last July. I first toyed with the notion of imagining what Lee might be wishing for on her birthday, you know, like someone does while they are blowing out the candles on a cake. But there were clear problems with this approach. For example, say that back here on earth among the living, you believe in heaven, the pearly gates, eternal “rewards,” and that sort of thing. I thought, if so, would you be doing your love in the hereafter any real favors wishing her magically restored to this flawed life–the celestial equivalent of “Go Directly To Jail, Do Not Pass Go”? I gave up this approach as I could not possibly know what might constitute wishful thinking for Lee in her current state. This is part of the mystery of death and must remain so.

I thought next, I will send Lee birthday wishes. However, as I started to construct my list it quickly became apparent to me that it would end up being a list for me, and not a list for her. Happy birthday, sweets. I am planning to throw a self-pity party in your honor.

Fortunately, as I continued agonizing, Lee’s brother, Paul suggested that he and his wife, Joanne, would come my way from the ‘burbs to have supper at a burger joint located in the hood walking distance from my home. Great idea! In turn, I invited Mont to join us. Mont, who lives upstairs, has rented an apartment in the building for the past 20 years or so, first became our close friend and today basically is family. Mont dearly loved Lee and still misses her, too.

Saying that we four enjoyed a birthday celebration for Lee sounds a bit awkward, so simply say instead that we honored Lee on the occasion of her 67th birthday. We shed a few tears, but we laughed a lot more than we cried. We reminisced about the past and looked forward to a brighter future. Paul, like his brother, Dave, and his father, who I hear had been quite a scrapper in his day, is himself a strapping fellow. And when he spoke about the hardships his “little” sister faced growing up, he in part was recalling the people who had picked on her, taking unfair advantage of her diminutive stature. In fact, Lee was tiny. Paul lovingly described her fighting spirit, which she displayed throughout her life and which served her well until nearly the very end of it. Paul told us that he and brother Dave would say of Lee, small but mighty. The moniker stuck because it was true. 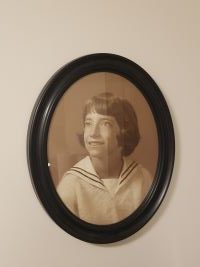 For her part, I can attest that Lee doted on her “big” brother Paul, who being 6 or 7 years older, was the middle child in their family. When Lee moved here from her small lakeside hometown located in western Michigan, I understood that Paul and Joanne took her under their collective wing, opened a few doors and gave her opportunities to help her to get started in a new and unfamiliar place. All of this occurred before I knew her.

Paul and Joanne have two sons, Andy, and Joe, each one now a strapping man in his own right. However, when they were still little kids Lee had been their favorite babysitter. And, as Andy and Joe grew into tweens, then teens, Lee also got to know many of their friends. Today, of course, Andy, Joe and their respective pals all are much older than many of them probably would care to admit, but at gatherings I will still hear them talking fondly about the old days when Aunt Lee would let them run wild while the folks were gone.

In truth, however, during my time with Lee I could observe that her family relations were not always so idyllic. Lee would ache with hurt and disappointment if Paul and Joanne excluded her from family events that she reasonably had expected to be invited to attend. I know that it stung her deeply when they gave short shrift to one of her ideas or suggestions. These types of incidents did not occur frequently, but nonetheless they hurt Lee because they made her feel like she was an afterthought. Usually, although not always, Lee would simply bite her tongue despite feeling that she had been relegated to second-class citizenship.

In this way, Lee and I were different people. I am proud to say that I was completely dedicated to Lee’s well-being and happiness and I am not ashamed to admit that I could be overly zealous and fiercely protective of her, especially if I perceived that she was not being duly respected or fairly treated. More than once she had to dissuade me from confronting an offending party, which sometimes might include her own brother or sister-in-law. Lee and I were fortunate in that there were very few areas of disagreement between us capable of escalating into a full-blown argument. This was one of them.

I have a strong personality, but so does Paul, and there were times we easily could have butted heads, except that Lee never would have allowed it to disrupt a family gathering. This yin and yang between Lee and me was one of our chief strengths as a couple and helped to bring balance to our relationship.
Yet to this day I am not sure if Paul and Joanne ever fully appreciated how easily they were able to hurt Lee or, in consequence, how crazy angry I would get at them if I sensed she had suffered injury. Thankfully for all, Lee herself always managed to keep a cool head, and easily deflected any slights because she correctly assessed they were not intentional. She certainly managed to keep me in line.

So, the other evening, as we sat at the burger joint to enjoy our dinner and drinks, I fairly marveled thinking about how far Paul, Joanne and I have come in our relationship in the relative short time since Lee’s illness and passing. It felt right, like being with close and trusted lifelong friends. I felt good that, together with their boys, and the boys’ wives and kids, I am part of a family. The bonds of friendship and family are not entirely fresh but slowly and over time have become strong and unbreakable like a sapling grown into a sturdy tree. Yet another gift to all, courtesy of Lee, ever the gardener. A fitting gift to celebrate the occasion of her birthday. A fitting gift, indeed.