Photos my own, taken at the Holy Trinity Anglican Church in Geneva, Switzerland

Yesterday, unusually, I went to church.

I had been invited – some six or more months ago – to speak at the Holy Trinity Church in Geneva, an Anglican church. As often happens, the date moved, moved again, and finally we ended up with yesterday’s date, 11th September.

The invitation was that I speak about living with Grief, living with an awareness of our Mortality, the benefits of giving and/or volunteering, and also the Maison de Tara, the hospice I volunteer at.

Rather a tall ask, I felt. Yes, I love rattling on about each and every one of those topics, but I don’t like to be rushed. They are not rush-worthy topics. And I don’t like to talk at people. I’d rather engage people with questions, get reactions, etc. But not being very familiar with churches, I wasn’t sure how appropriate it would all be.

Some 10 days before my yesterday session, I wrote out my piece – it flowed out of my fingertips on to the screen.

My connecting thread was 9/11.

And 9/11 is the day my friend Don died, seven years ago now.

And three other close-in deaths came fast and furiously after Don’s.
The stage was set.

And then the Queen died. And the collective ground – not just in the UK, but all over the world – shuddered. Rugs were pulled from under millions’ of people’s feet. Not just those closest in to the Queen.

This is what happens with death. Any death. High profile or not.

And so my plans were disrupted. As they should have been.

The Reverend called me on Saturday afternoon and kindly invited me to adapt my speech (actually – she called it a “sermon”), but also shorten it to 10 minutes because of additional things that needed to happen during the service.

Don came out of my speech sermon.

It was hard to press “select and delete” over and over in the text. And rejig things to make sure that the flow, the messages, the points, were still coherent.

I felt pain as I deleted Don. Not only was I deleting him, and no longer able to say his name in a public place on such a crucial day, but I had to delete my own memories of the original 9/11 date – when I was at the tail end of my maternity leave, having recently had Megan.

But death disrupts. And so I had to adapt and adjust.

I spun around on my back foot. Adapted my text.

Then, as gracefully as possible in posh shoes and dress, clambered up the pulpit steps and delivered my sermon to a bigger-than-usual congregation.

It was a very moving experience.

I do like churches. I like the space, the quiet. I love the simplicity. And – when they are there – I love the light streaming through stained glass windows.

Here, in this teensy tiny little church in Geneva, currently wrapped up in building materials and scaffolding, is where we all congregated. I arrived early and wandered around. I found a small table with a photo of the Queen and a book of condolences. 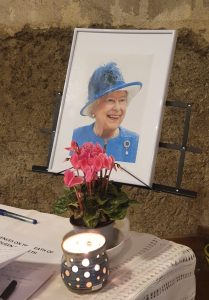 I hesitated about whether or not to write something, then chose to. I wrote simply,

“I bow deeply before you.

With deep gratitude for your decades of service.

Such simple words. But they are very true for me. I do bow deeply to people – like the Queen, like Nelson Mandela, like Gorbachev – who (despite having their faults) – somehow upheld clean and high standards. Who had such commitment to being and doing their best – over and over – so much so that the world shifted – if only temporarily – into being a better place.

I am grateful I had this opportunity.

I am grateful that I heard some new stories of the Queen, and sang a couple of her favourite hymns.

I am grateful that I got to sing God Save the King.

And I am grateful that I got to play a tiny part, and witness the closing of a great chapter in British history, despite having left the UK almost 25 years ago.

Some coverage of the church’s service in the local press.