Last week, on Thursday 6th February, I was having “a good day”.

I had been for a long swim early in the morning and felt good in the water. I had a calm-ish day planned in the beautiful office space I have on Thursdays – just a few calls planned during the day, and most of my time spent reading, catching up on admin, etc.  Sun was streaming through the window. The weather was chilly and crisp. The best kind of winter weather.

Early in the afternoon, I had a planned-for call with a man I had worked with (we worked out) 18 years earlier. He had got back in touch with me a couple of weeks prior, seemingly out of the blue. When people do that, I usually reckon it’s for one of four main reasons: (a) they have heard about my “lot” and want to express their condolences/sympathy etc; (b) they want to start working freelance and would like to talk about it with someone who does just that; (c) they have a job opening and want to know if I know someone who might be interested (which might also be me); or (d) they want to know if I might be interested in doing a spot of work in their organisation.

This conversation turned out to be (d) and it was delightful. We caught up a little on each other’s lives and careers over the past almost two decades, brainstormed ideas, agreed when I would come back with a proposal, and hung up.

I was on a high. Discussing work I love to do.  I looked across from my laptop to the two beautiful Julia pictures that sit propped up against the wall. (The friend I rent the space off keeps them there all the time, despite me only being there one day a week. She doesn’t even have pictures of her own daughters – just my Julia). The emotions I feel when I look at those pictures vary – sometimes it is a really hard tummy lurch, but sometimes, as that day, it’s warmer – almost soothing. I can just say, “I love you so much, Jubee”, sigh deeply, and be okay with that.

I went on to check my emails. A few had arrived since my call had begun. I opened one from The Compassionate Friends – the organisation for people who have had a child die. Months ago I signed up for a 3-day workshop in the UK for people in “early grief” after the loss of a child. It’s coming up, at the end of February. I know it’s there, on the horizon. I have my flight, car rental and accommodation booked. I have filled out forms and sent along my money. So it’s no real shock to get an email confirming the details.

Except that the content of the email, with the schedule of the workshop, the events planned, the beautiful-soft-gentle-compassionate-empathetic language describing our courage in attending, the difficulties we might experience being there, the comfort we might also receive…. They bring it all home.

The remembering-forgetting-remembering-forgetting lurches are astounding. Of course I never forget that Julia has died. In every dream I have had had of her since she died 7 months ago I know she’s dead. Even if she is alive in the dream, we both know she is dead. I can see the photos of her on my desk and feel warm. I am never shocked. I never forget. She is never out of mind. Nor is Mike. Not ever.

Except I am repeatedly shocked. Reading the outline of the upcoming event, the topics of various talks and workshops on offer, the request to bring a photo(s), the offering of the therapeutic 1-1 sessions, they bring it all back.

The non-negotiable fact that despite losing a child I have also lost a spouse, and so I can’t even participate in the session called “Grieving as a couple”.  I know that grieving Julia would be so different if I had Mike. And if I had Mike, I wouldn’t have lost Julia. I know that in every cell of my body.

It’s such ups and downs.

“Montagnes Russes”, or Russian Mountains, as the French call them.

Lurching up and down and side to side, 24 hours a day. In emotional turmoil. Deep and changing emotions. Bottomless sadness.

The Real-ness and permanence beginning to come through. Just like I still feel that Mike is away on a long trip, so I believe that Julia has just popped out, or gone away for a trip somewhere. The truth is impossible to behold. Still.

Ongoing brutal reminders that despite my apparent resilience and skill at navigating these turgid waters, the thump to the heart and the kick to the belly is only ever a millisecond away.

Russian Mountains. So hard to hold on. 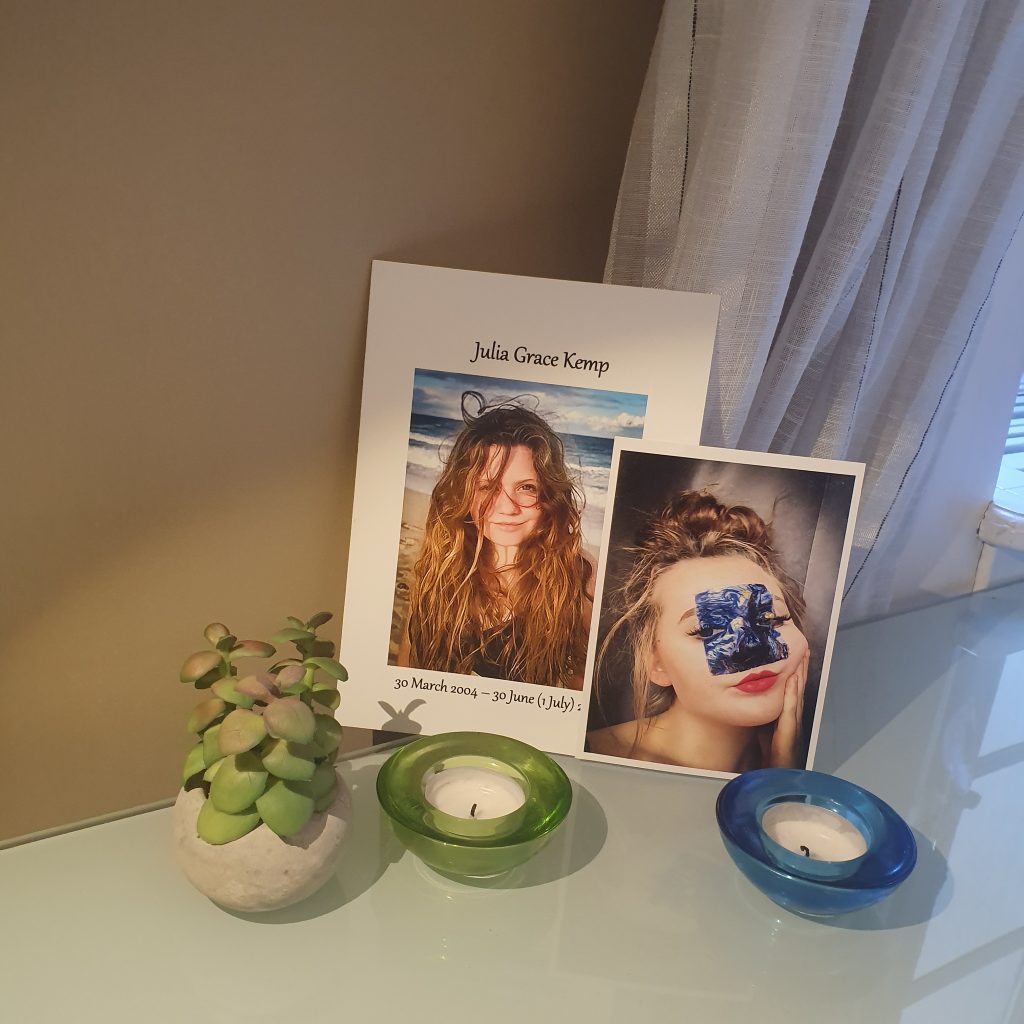 I am British and now recently also French (because of Brexit), and I have lived in France for the past 21 years. I am 52 and sometimes feel to be an “older widow”, and yet I feel so young. I lost my best male friend Don to bowel cancer in September 2015, my brother Edward to glioblastoma in January 2016, my husband Mike to pancreatic cancer in April 2017, and my sweet youngest child, Julia, to grief-related suicide, in July 2019. And I met a new love (let’s call him Medjool, after my favourite kind of date), off one single meeting on a dating website. Our relationship has exploded into blossom as of June 2019.