We sense something, or someone, just out of sight, and strain to see through the swirling snow. I close my eyes, as if this might sharpen my hearing, but can only hear the wind. It produces strange noises that move and swirl, feral and alive, and suddenly I feel surrounded in the dark by these ferocious, howling wind hounds crouching out of sight among the shifting drifts. I shudder, but it’s only the biting air, so cold that it burns exposed skin. One moment Donna has caught a glimpse of a shape moving purposefully in our direction. The next moment the delivery guy from The Tap emerges out of the darkness of the parking and into the lobby of the Home 2 Suites by Hilton. Our food had arrived!

So goes Day 1 of our mid-Winter RV adventure.

This is Lola’s first road trip and the first of many great American road trips I hope to enjoy together. Our RV comes courtesy of old shoes, Craig and Donna, my partners on numerous journeys and adventures spanning many years. Our original plan, which would have ended with a visit to Nashville, was to have included Lee, of course. Lee enjoyed a good excursion and had been looking forward to this one, her interest in visiting Nashville piqued by the prospect of a RV trip with Donna and Craig. These plans got waylaid, first, by the onset of Lee’s pancreatic cancer, and second, the onset of a pandemic. Now, at long last, we were on an expanded version of the original trip, nearly two weeks on the road, to Georgia and back again. And despite current weather conditions, I feel ready for an adventure.

In the leadup, whenever folks asked, “Where ‘you headed, I’d give a taciturn, “south,” befitting a man of action, with maybe the slightest tilt of the head over my shoulder for emphasis. Our plan was to visit parks; to utilize park facilities; to hike through woods; to walk alongside rivers and lakes; to climb over hills that exposed wide, green dales below; to eat under the stars by the warmth of a good campfire, loyal pup at heel.
So today we headed south, but only made it as far as Urbana, Illinois, before the storm forced us whimpering to seek shelter off treacherous roads strewn with the carcasses of vehicles that only a short time before had been operated by people who either were not up to the challenge of driving in poor weather conditions or simply too cocky to take heed of what this first day out was shaping up to be.

Back in Waterford, Wisconsin, we had posed for a couple bon voyage pictures. Our first stop was a RV service business in Burlington, Wisconsin, to resolve some technical issues and get a little advice. The local mechanic sported a wild, unkempt beard, but spoke knowledgeably as someone who has lived alone in a RV in the woods for extended periods might speak. He looked over Craig and Donna, derisively called them novices and complained it would take him the better part of a day just to teach us what we already ought to know. As we outlined our imminent travel plans my sense was that he was asking himself why he was wasting breath on people who were idiots.

I’d heard it predicted that Chicago would get 1” to 3” of fresh snow. As we passed through the city around noon, the snow was steadily falling and plentiful. We seemed to have found all three inches at one fell swoop. We carefully drove through, or more accurately, should I say, around, this snow. Then, before you knew it, we were 5 hours out and there was no turning back. We knew a storm was still raging behind us. However, we didn’t know that in a few short hours the storm had grown and intensified and was now moving much faster than the RV. Suddenly we were overtaken by it near Urbana, Illinois, and that was that. But even before it forced us off the road, we had been recalibrating our journey according to existing conditions. For example, we had substituted the current route through Illinois for a more treacherous route through Indiana, canceled reservations in southern Indiana for Day 1 and jettisoned a drive through a mountainous part of Tennessee scheduled for Day 2. The revised plan was to make a beeline for Georgia, which for now appeared to have been spared the ice and snow. We won’t know if we’re right until we arrive.

Just ahead of darkness on Day 1 we manage to secure lodgings in a pet friendly motel. The storm is still growing fiercer in the darkness as we trudge from the parking lot with our few belongings for the night, and soon enough we’re hunkered down for the night. We retire relatively early, but not before Lola has the chance to bound through snow drifts larger than she is tall and wide. It’s frigid in the open air, however, she seems impervious. I watch amazed and laughing while she frolics in the blizzard. Back safely back in our motel room I’m confident now that Lola is going to be a splendid traveling companion. Still, I don’t sleep without shedding a few small tears because I’m here with Lola and I’m not here with Lee.

By the time everyone is up and about on Day 2, Chicago has received 17” or 18” of snow. Watching images of the storm on the Weather Channel, I wonder whether my property will be encased and frozen until the Spring thaw. We learn from the fetching meteorologist –a woman who in times past would have been referred to merely known as the weather girl– that for about half of all Americans this is the worst Winter storm in decades. And we plan to forge straight ahead right in their direction.

Fortunately, Day 2 is sunny, not a cloud in the sky bright, and nearly unbearably so where the sunlight reflects off the new snow. For gallows humor we count stranded vehicles that have left the road, a good bit of fun until an unseen accident up ahead brings southbound traffic on I-57 to a standstill for more than one hour outside Effingham, Illinois, and not very far from Urbana. Today when we started out our optimistic goal was to reach Nashville.

At 3:15 p.m. I can spy the Mississippi River, brown, swollen and rolling along, bathed in sunshine. We cross it near Paducah and enter Kentucky. The Kentucky scenery is pretty. We pass several sizeable rivers, at least one of which has started to freeze. The ravages of the storm on Kentucky become evident as we drive past groves of trees whose ice-covered branches twinkle sunlight back at us. There will be a lot of folks without electrical power tonight. Yet, the snow is not nearly so deep as in Illinois. And, where grasses are visible pushing up though it, numerous deer have gathered in groups to feast.

By around 4:30 p.m., a sign announces that we’ve entered Tennessee. But for this sign, it would be hard to tell where Kentucky stopped, and Tennessee started. To my eyes, this section of the Volunteer state appears a dingier version of the Bluegrass state we’ve just left. I chide myself for allowing settled Northern bias to cloud fair judgment concerning my Southern brethren. Later, as I scout the spartan RV park where we’ll be spending the night, I notice that it appears to be the semi-permanent home to a host of vagabonds whose license plates hail from places all over the South.

With an electrical hookup in place we finally have heat inside the RV. Relaxing after the long drive, we break out food, beer, and wine. Craig sips his Kentucky whiskey. First, we raise our glasses in friendship. Then we raise them again in memory of Lee, whose company this night and always is missed. 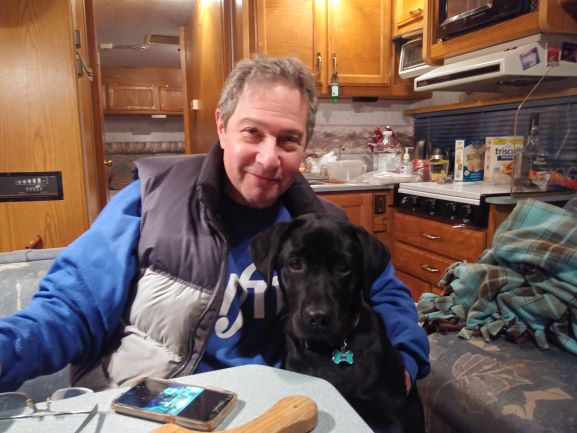 Dear Reader, there will be more to come. Suffice to say that after only two days on the road, I already have fresh images and new memories that will endure in the months and years to come. The reality is, ready-or-not, life goes on for the living. And so far, at least, the decision to make this fool’s journey into the teeth of the storm feels life affirming, another step away from the darkness that is grief.