I just re-read last week’s post to see if I had mentioned “Orienteering” and saw that – oddly – I hadn’t. However it was a feature underlying that piece of writing. Orienteering is where I had been with my parents, in Leucate, when I came across “Ed’s Feather” on 22nd May.

Orienteering is the sport that all 7 of us did when we were growing up. Seven Pearsons – plus, invariably, a couple of other local kids whose parents didn’t partake in such delights – in my parents’ VW minivan, which seated 9 (more or less comfortably. Less, as we got older and bigger).

Orienteering is the sport I began as a young kid, along with the rest of my siblings. I was “accompanied” around for the first couple of years, but by age 9 was doing it alone – probably a little too early, to be fair, in that I got horribly lost and was scared of being gobbled up by wolves. Or cows. Or charged at by bulls.  And having older brothers who thrilled in scaring me with invented. stories of the animals out there waiting to pounce on me didn’t increase my sense of well-being.

Orienteering “en famille” was no doubt a form of “child management”, in that we just all did it. We all got up early most Sunday mornings, invariably drove a couple of hours to somewhere like the Ardennes where there are fantastic forests, ran/walked/tripped through our age-appropriate course (each of us had our own course and competed against people our own age, though sometimes unknowingly had the same course as one another), got back, compared bramble and branch scratches and tears on arms and legs, levels of muddiness, duration of mistakes or time lost due to parallel errors, degrees of “lost-ness”. And then drove a couple more hours back home, happily exhausted and too tired to argue about who was taking up more than their fair share of space.

Occasionally mum and dad doled out a boiled sweet or mint – perhaps even two – and we’d have competitions as to whose sweet would last longest, and irritate each other no end with pretending to have swallowed it but then not having even started the sweetie. Oh, the miserable joys of having too many siblings.

Somehow I could tell, even as a kid, that orienteering was a “good sport”. And as I became an adult, and then a parent, I was in awe of the sport’s brilliance – as a skill builder, keeping us busy for a full day, being out in nature, allowing us to compete against ourselves and others our age (but not specifically one another), and providing entertainment and holiday ideas for years and years. That I visited Sweden, Finland and Hungary before 1980 is entirely thanks to orienteering. I mean, who else did that? And that I am still traumatised from too much camping in Scotland and Wales in miserable weather, that the pitter patter of rain drops on canvas makes my anxiety rocket, that the zzzzzssssssuuuuuuppp of a long zip opening up a tent far too early in the morning still fills me with horror, and that I have put on dirty, damp socks, shoes and clothes day after day so many times in my life that my skin can sense it, even when it’s not even happening… despite all of that, it’s a great sport. Or at least character building.

Mike, who was brilliant at all sports, took to orienteering like a duck to water. I mean, if you can read a map, and run and be agile in tricky undergrowth, take a bearing while moving at speed without banging into a tree, and somehow stay on course, you’re going to be good. Later, as parents, because the local orienteering was on Saturdays, not Sundays, we couldn’t make it work, Saturdays being given over to theatre/synchronised swimming/dance/gymnastics and more.

But the appeal remained. It’s a multi-generational sport. My parents, now in their 80s, still orienteer. In non-COVID times, they participate in World and National Masters events. Sometimes they walk away with medals. Even though they have slowed down, falls are most unwelcome, and they argue that they don’t really run any more, they still get great enjoyment from the sport. It keeps them active, moving, and engaged in society. A truly brilliant pastime.

So it was with considerable delight (and some apprehension) that I orienteered with them a week or so ago on Edward’s birthday. And I wondered, “why don’t I take it up again?” Of course, even sports that just require a map and compass “move on” technologically. And my body has transformed no end in terms of its capabilities. So having invested in “seriously uncool half-moon glasses” so I can both read the map and more or less see where my feet are going without having to take the glasses on and off, I decided to register for a local event.  Which was yesterday. 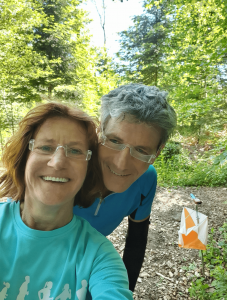 And Medjool, having a good dose of Mike-type characteristics and sporting abilities, agreed to join me – despite never having orienteered before. We probably bit off more than we could chew, in that the course was quite long and tricky, but the sun was out, the forest smelled good, and we didn’t fall out. Medjool said afterwards, “it’s like a cross between an Easter egg hunt and boy scouts”. Yes – I think he’s probably right. Having to find controls, sometimes well hidden in the forest, provides such a dopamine kick when you get there – somehow even if you’ve been out over 2 hours and are getting thirsty, there’s a compulsion to carry on. And we weren’t even last. Close, but not last. An added bonus.

It was a good day. It was a lovely weekend. I am sure we will do orienteering together – or together-alone – again sometime soon.  Afterwards we talked of how these are “big steps” – particularly for me. This sharing of sports. A blending of histories and stories. Weaving together pastimes and passions. Teaching one another new skills – hopefully with adequate patience.

When you’re in a relationship as long as Mike and I were, sports and interests became joined interests and family affairs (walking, swimming, skiing, music – to mention just a few). To keep all of those going these past few years has not been easy, even when it has been nourishing. And much of it has been downright lonely. So to find someone whose own interests overlap with some of mine is truly a blessing. God forbid I had met someone who loved shooting. Or motor-biking. Or golf.

Medjool and I have enough overlap in the sports we love, and we also have sports the other doesn’t do, which means we get to try new things. I introduced Mike to skiing, swimming and orienteering, and he introduced me to tennis. No surprise, Mike learned “my” sports brilliantly, and I never took to tennis. It will be the same with Medjool, I suspect. I have not proved to be particularly good at “his” sport of kiting – whether on snow or water. I might persist a little longer. And I will do what I can to embrace cycling.

But to have him come orienteering with me yesterday was meaningful. Somehow it’s more than “just a sport” to me. There was nothing trivial about him having a go, and best of all, he knew it too. He knew, and articulated, that this is precious terrain for me. History. Stories. Holidays. Experiences. Richness and depth. And while I felt I just wanted him to enjoy it, so that it might become part of our present and future, Medjool was more acutely aware of how he was encroaching on my past. That his opinion mattered to me. That his liking or disliking it would be akin to him “treading on my memories” (to paraphrase WB Yeats).

It’s delicate stuff. Charting and navigating new terrain, literally and metaphorically, for a common future. Without trampling over the past. Medjool handled it all with such grace, humour, and reverence.