Eight years after sudden loss, I often have the feeling that maybe Im okay. Maybe I have finally moved past all of the trauma surrounding ‘that day”. Maybe it will now sit in the background like a dull hum, soothing me instead of harming me.

Or maybe that’s a lie.

This morning, I was eating a light breakfast before getting ready to head to my morning gym/swim routine, and sitting in the kitchen with my mom and my boyfriend Nick, who is staying here for the weekend so we can start moving some items slowly over to our new apartment. The news was on in the background, and a pretty big sports story that I had not heard about was playing. As the news segment aired the details of the story, my mom and Nick began discussing it, saying how amazing it all was, and just generally commenting on it. As I listened to the story, everything inside me froze.

The story was about Jay Boumeester, NHL hockey player on the St. Louis Blues, receiving a standing ovation from the crowd last night, as he sat in the stands watching the game. Why the standing ovation? Because in a recent previous game against the Ducks, during the 1st period and while on the bench, Boumeester collapsed and suffered a cardiac arrest/event. The trainer went into immediate action, defibrilator was used, and Jay was met very quickly with medics and EMT’s who rushed him to the hospital, and saved his life. The news segment was re-telling that story, and showing him back at the arena for the first time since the collapse, and how the crowd erupted into applause upon seeing him on the big screen.

Watching that, everything went sort of cloudy and in slow-motion, as I heard Nick’s joy at the player being okay, and then my mom commenting that “Don would probably still be here if there was a defibrilator around when he had his heart attack.” Suddenly, I felt sick to my stomach, and felt the knife in my throat turning and tasting like steel. My brain turned into a slideshow of what I imagine happened on “that day”. The images started coming at me – Don inside the PetSmart where he was volenteering his time that morning. Don probably petting a kitty or a puppy or putting dog food onto a shelf, or setting up the adoption paperwork for the next person to come in looking to give an animal a home. Then, he collapses. He grabs his chest. He feels pain. He goes down quickly, but maybe not quickly enough to not be aware. He is on the floor, lying there, unconscious. He is alone. He is totally alone. Nobody can tell me how long he was alone for, but there was no difibrilator, no medics rushing to his side, no hockey game going on around him with an arena full of people who cared. He was alone.

I walked downstairs and out of the room, because I knew I was about to cry hard. I walked back and forth in the basement, and tried to rid myself of the horrible images of him lying there. Tried not to think about my sweet husband, who was a paramedic, and NOT at work on the ambulance that day. My husband,who  had used the difibrilator on several patients and who had advocated for its use out loud many times. My husband, who saved many other people’s lives, and now when he needed saving, nobody was there in time. He was totally alone on that floor, and then in the ambulance, in the ER, and by the time I would wake up from my sleep, he would already be dead. No crowds would cheer him on because he lived. No fanfare would happen. Just a life ripped apart and a widow left behind to figure it all out.

It will never, ever be okay for me that he was alone when he collapsed. He was alone when he died. I know now that I most likely could not have saved him, but I could have loved him. It pains me that during his last moments on this earth, I wasnt there to hold his hand or comfort him, to tell him how unbelievably loved he was and is. To tell him that he made me so incredibly happy. All those thoughts creep in, all the unanswered questions. Why didnt he get that second chance like so many others get? Why couldnt he have been saved in time? Why wasnt he working on the ambulance that day, surrounded by medical equipment and EMS people that cared for him? I will never know the full details of what happened in those moments. The manager of the store who found him collapsed and tried to do CPR on him, was sent home for the day and then the week, because he was so traumatized. That’s all I know. And I cant even imagine his trauma, having found Don like that and then knowing that he couldnt save him. But I know my trauma for NOT being there, and it’s hell. Yes, it has gotten better over the years, and I no longer have panic attacks daily, or go to sleep with endless nightmares about him dying alone. But all it takes is some feel-good story about someone surviving a cardiac episode, and my brain starts replaying that slideshow on a loop.

It isnt fair. it will never be fair that his life ended that way, and that he isn’t here anymore. It will never be fair that I’m left with all this trauma, that gets re-lived each time some well known person has a heart attack in some dramatic fashion. It isnt fair that someone as good as he was, left this earth so soon , and without fanfare or applause. He deserved all of that and more. He deserved crowds of people to be cheering him on as he came back to life, unharmed.

But instead, none of that happened. He is dead, and I can’t watch stories about people who collapse suddenly. I cant see that romanticized or dramatized, or hear talks of how so-and-so lived a full life all because the medics arrived in time and used that defibrilator. Im happy for those people. Honestly. I just cant listen to it or hear about it. Its much too painful, and it hurts every single time.

I asked Nick if he would come down to the basement for a minute, and he did. He said what do you need, and I answered: “I just need a hug.” He held me while I cried and then while I spewed out emotions about that ordinary Wednesday when my 46 yr old husband collapsed on the floor, all alone. I pulled myself together, went swimming at the gym, and now Im writing about it in here. Over the years, I have learned how to take care of myself when trauma visits. Writing helps. Exercise or movement helps. Crying it out in the arms of my wonderful boyfriend helps. But still, it will never be okay, and I will still feel sick to my stomach whenever I think about the details of how his life ended. It haunts me, and I dont know how to ever be at peace with it. 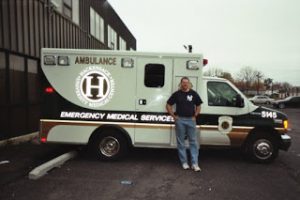 Kelley Lynn is a comedian, actor, TED talk speaker, and author of "My Husband Is Not a Rainbow: the brutally awful, hilarious truth about life, love, grief, and loss." Kelley was widowed at age 39 when her beautiful husband Don left for work one morning and never came home. (sudden heart attack.) Since then, it has been her mission to change the conversations we have surrounding grief and death, and to help those who are sitting in the dark, to find some light again. Kelley is a proud kitty mom to Sammy and Autumn, the 2 rescues that she and Don adopted together. In 2017, Kelley met her next great love story, Nick. They married on New Year's Eve 2020 in a FB LIVE ceremony, and are loving their new home in Westminster, MA.