Every year about this same time, television stations roll put their catalogues of scary movies to help celebrate Halloween. It has been a tradition as far back as I can recall, and at my age, believe me, this tradition covers a lot of ground.

For example, my personal faves from the 1950’s would include Don Siegel’s paranoid nightmare, Invasion of the Body Snatchers, and the atmospheric Night of the Hunter, where a psychopath preacher, portrayed by Hollywood leading man Robert Mitchum at his creepiest, roams the countryside in pursuit of innocent children. And in 20 Million Miles to Earth, thanks to the cutting-edge special effects magic of Ray Harryhausen, a space hitchhiking Venusian lizard grows to gigantic size, then attacks the City of Rome. For weeks thereafter, fear that a rapidly growing outer space lizard could be hiding in my closet haunted my dreams. Looking back, whether the monsters came from outer space or were an unfortunate byproduct of atomic energy, the culprit in these films was often science run amok.

In the 1960’s the focus of the best horror movies shifted from science to the human mind. In 1960, as a 10-year-old, my parents would not permit me to see Psycho, but I vividly recall catching the coming attraction to Hitchcock’s film, punctuated by Bernard Hermann’s jarring musical score and the image of blood swirling down a shower drain, during a Saturday matinee double feature of the latest Roger Corman/William Castle schlock horror show.

IMBd’s top five horror films of the 70s –The Exorcist, Jaws, Alien, Halloween, and Dawn of the Dead— demonstrate the genre remained in good hands, though by then I was an adult and not easily impressed. I suppose every generation has its favorites, soft spots that fairly ooze shock, blood, and gore, preserved in memory, only to rise each Halloween when the moon is full!

So, with Halloween fast approaching, today I resurrect a post that appeared here last year around this time. Trick or treat? You decide.

Before this year, I would have told you that Halloween was one of my favorite holidays. A celebratory, non-denominational kid pleasing holiday, replete with costumes, scares, magic, and mystery. And for older teenagers and young adults, Halloween offers a good excuse to let your hair down, encouraging sexy or silly frolic that can last beyond the witching hour.

My mother took immense pride in making hand-fashioned costumes for my older sister and me. She cobbled together wonderful and inventive outfits. She might dye everyday clothing to create distinctive garb that could be fun and colorful or dark and spooky. She accessorized the transformed wardrobe with a seemingly endless array of ordinary household items – wire hangers fashioned into bug antennae, papier-mâché hats or crowns, informative cardboard signs she’d attach to wooden sticks (“take me to your leader”), applied makeup whiskers and facial hair, or talcum powder sprinkled on my head for aging effect.

One year I would be a one-eye, one-horn, flying purple people eater; another year I would be the Pied Piper, leading a string of “charmed” rubber mice that followed behind, attached with thin wire to my cape (itself a cut and dyed bed sheet). At risk of dating myself, I remember that one year my older sister, costumed as a CARE package, brought home the prize for best costume our elementary school teachers used to award. Win or lose, every student celebrated Halloween by leaving school a few minutes earlier than usual to participate in the annual costume parade before a throng of adoring parents, some with preschool toddlers and babies in tow. I would keep a sharp eye, grinning or waving lest I spotted my mom, an aunt, even a familiar neighbor in the crowd.

After the school parade, my friends and I would dash home, grab our paper grocery bags, and meet up on the corner to “trick or treat” in earnest. Then, until it turned dark, and the streetlights would come up reminding us that it was time to head back home, we kids ruled the streets. Parents expected older sisters to accompany the youngest revelers as they methodically went door-to-door.

As kids, we felt perfectly safe to trick or treat without hovering, omnipresent adults haunting our every step. Back then, parents seemed not worried in the slightest there might be lunatics living among us, who took sick pleasure serving up adulterated “treats” to children. In fact, the first time I ever heard a television news report that some parent had discovered needles hidden inside of a taffy apple, I was already a teenager, and past a “kid thing” like trick or treat while dressed in a costume.

Nonetheless, as a grown man I still enjoy observing the trappings of Halloween, especially now this year, one year removed from the height of the pandemic. I had been looking forward to the return of kids in costume, and the long-delayed resumption of the time-honored traditions of my own youth. I was eagerly anticipating the arrival of kids in all shapes and sizes, who would be arriving at my home to ring the doorbell and demand treats. In my mind, I could almost hear my gate slamming as the boldest among them bounded up my outside stairs, and, upon reaching the landing, simultaneously pushing both the upstairs and downstairs doorbells, only to momentarily freeze at the sound of Lola the pup barking excitedly from inside of the vestibule.

As always, my plan was to open the door wearing my mask –nothing too horrible, mind you—so that after experiencing the briefest shock both the bolder kids and little ones holding back in trepidation one step below my landing, would shout in unison, “Trick or treat!”  And then everybody, including the kids, myself, and their beaming parents standing outside the wrought iron gate, would laugh and smile. Finally, I planned to give each costumed individual my approving once-over before handing out generous portions of booty to each.

At least that was the plan.

Sunday afternoon, after I dropped off Robyn, I hurried home to prepare for a steady arrival of costumed tricksters. First, I placed a welcoming Halloween sign on the fence. Next, I removed the treats from my pantry and placed the unopened bag into a large bowl strategically located nearby the front door for quick access. 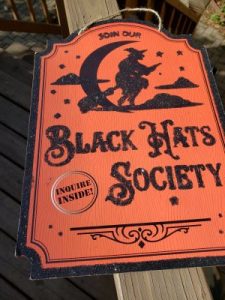 Then I waited for the sounds of my gate closing, the trampling feet of the revelers rushing up the stairs followed by multiple rings of the doorbells. And then I waited some more.

As I await the arrivals, I observe there is an overcast sky, but the weather forecast does not call for any rain. The temperature feels below normal, made even cooler by a brisk breeze. The air would feel cool against any exposed skin, of course, but not so cold as to detour an eager kid on the prowl for candy. Heck, I can recall trick and treat while the wind howled wild and it poured rain. Once or twice, it was so unseasonably cold that the Halloween sky had been spitting snow.

So eventually, I leave my home and step outside onto the porch to see what is happening on the block. From this vantage point I can see a pack of kids and their parents gathered at the far end of the block on both sides of the street.

I also observe two of my neighbors sitting on the steps of their porch. I leave my property and approach them. I ask, where are all the kids, but the neighbors tell me the kids have come and gone. Those are the remnants that I see gathered at the far end of our street. I wonder aloud, “don’t kids ring doorbells these days?” And to my surprise, I learn the answer, in our neighborhood at least, is no. In 2021 it appears the preferred approach to trick or treat on Halloween is to leave the treats in a bowl outside the curtilage, trusting the kids to grab only their fair share as they and their parents scurry by. Apparently, many parents prefer things this way, believing it’s the only safe and prudent practice in such unusual times.

But I persist. Isn’t the whole point of the phrase “trick or treat” an implicit threat of mischief if the adult homeowner doesn’t pony up when the little darlings come ‘round his door for treats? One neighbor merely shrugs, says nothing. The other neighbor answers, “I dunno.” They look at each other, stand up, and step back inside their home.

I feel deflated. I walk back to my own property, remove the Halloween sign, lock the front gate behind me and close my door for the evening.

It is now early November, and I am staring at the unopened bag of delicious Halloween candy that is still sitting exactly where I put it on October 31. All 150 pieces, including such personal favorites as Kit Kat, Mounds, Reese Cups, Peppermint Patties, Musketeers, Snickers, M&Ms —plain and peanut—to mention some. My mouth is watering in anticipation. I hear the bag calling to me: Hey, fat boy, just tear me open. Don’t you love me anymore?

As I say, before this year, I would unequivocally have stated that Halloween is one of my favorite holidays. Now, as I tear through the wrapper of yet another Kit Kat, Halloween’s magic spell feels broken and in need of repair.